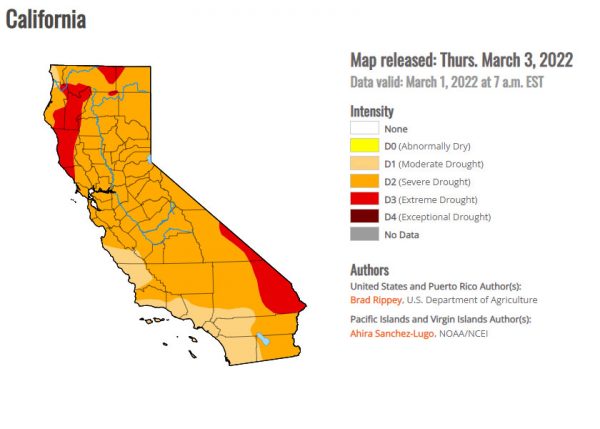 The 2021 drought directly cost the California agriculture sector about $1.1 billion and nearly 8,750 full- and part-time jobs, according to estimates in a new analysis led by University of California Merced researchers.

The Economic Impacts of the 2021 Drought on California Agriculture Preliminary Report analyzes the impacts of last year’s drought in California’s Central Valley, Russian River Basin and northern intermountain valley areas, according to a news release.

The report identifies at least an additional 395,000 acres of idled land — roughly 385,000 acres in the Central Valley alone with respect to predrought conditions because of drought-related water cutbacks.

“In comparison with the 2012-2016 drought, conditions were much worse for the Sacramento Valley and the Russian River Basin, yet the statewide impacts have not been as severe as in 2015 — the deepest point in the last drought,” School of Engineering Professor Josué Medellín-Azuara, lead author of the report, said in the release. “Should dry conditions persist through 2022, a higher tier of adaptation measures may come into play to reduce economic impacts on agriculture and communities.”

While Californians are familiar with drought, the 2020-21 water years were the second-driest two years on record, the release said.

“Sadly, we are going to see more and more droughts like this, so we need better tools to anticipate and minimize the socioeconomic impacts,” Alvar Escriva-Bou, researcher and co-author, said in the release.

The drought hit during the early implementation of the Sustainable Groundwater Management Act’s sustainability plans. The act is designed to avoid the undesirable consequences of unsustainable groundwater use.

Groundwater sustainability plans for critically overdrafted basins were submitted in 2020 and plans in other priority basins are due early this year. California’s increasingly variable supply of surface water and overdrafted groundwater aquifers present serious challenges for meeting societal needs, the release said.

It is no surprise that California leans heavily on groundwater to help meet its water supply needs during drought. SGMA is now well underway, and it is shaping how growers respond to drought.

“Despite the very real economic impact, this report also indicates an enormous capacity for innovation and adaptation in the agricultural industry, with direct investments in aquifer recharge techniques and technologies,” Joshua Viers, professor and co-author of the report, said in the release. “These innovations, coupled with better information about water application and use, will ultimately help us manage scarce water supplies more effectively.”