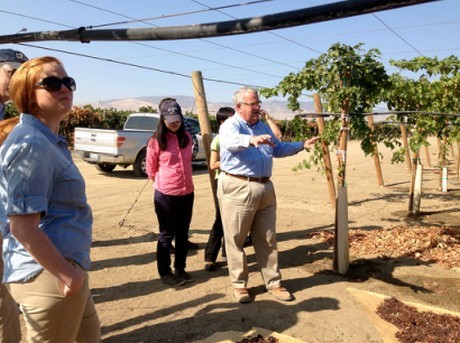 There is only a couple of weeks remaining for the almond harvest in California. Growers say the majority of the initial crop has been harvested – the Nonpariel varieties that make up much of the volume. For the most part, growers are half way through harvesting their second crop – the pollinators – and this should be completed by the end of September.

“We have just finished our first crop and are half way through our second,” said Justin Diener of Red Rock Ranch in Five Points, California, adding that yield is set to be higher this year. “We have not yet processed all of our almonds yet, but of what we have processed, yield is 20 percent higher than last year. Overall, it seems to be a bigger crop this year.”

Diener explained that weather conditions last year reduced the yield, so this year things are back to normal. “We had a late frost last year which reduced yield, but this year the trees are in much better condition,” he said. “The crop experienced a good pollination season in the spring, and summer growing conditions have been relatively mild.”

The harvest began on August 1 and continues for about 60 days. Once harvested, the almonds are stockpiled, with processing taking around four to six months.

Market performing well despite tariffs
The good news for almond growers is that the market has not reacted negatively to the China-US tariffs, as earlier feared. Instead, prices are maintaining what can be considered a typical level for this time of year. Diener explained that despite a bigger crop than last year for growers like Red Rock Ranch, volume has been lower in other parts of the state, which may explain the steady market.

“Despite the tariffs, the market seems to be doing reasonably well,” he observed. “Prices are in line with other seasons and demand remains good. In other parts of California – notably the northern and eastern parts – growers did not have as good a harvest as we have had, so overall supply is steady.”

Red Rock Ranch is a grower of almonds. Once harvested, the company sends them to a processor which handles the almonds, before subsequently shipping them onwards to packers and other processors. In conclusion, Diener summed up the mood of almond growers this season. “We are feeling very positive about the crop this year.”