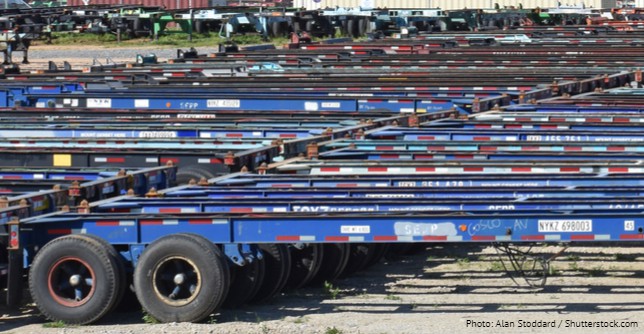 Most ocean container carriers have divested their ownership of wheeled chassis to third-party service providers, but American shippers and their draymen say they continue to wield considerable commercial influence over the cost to use this equipment.

“The chassis situation is one of the most complex and contentious components in our international supply chain, which is why we assembled all the players, making this a spirited topic at our virtual 32nd Annual Meeting,” Peter Friedmann, executive director of the Agriculture Transportation Coalition, told American Shipper.

In the U.S., most container chassis are owned by three leasing companies — Direct ChassisLink Inc. (DCLI), Flexi-Van Leasing and TRAC Intermodal — or by the North American Chassis Pool Cooperative (NACPC), which was formed by a group of 12 motor carriers.

The draymen, who are represented by the American Trucking Associations’ Intermodal Motor Carriers Conference (IMCC), earlier this month warned that they are willing to take regulatory and legal action against the ocean carriers, who are represented primarily by the Ocean Carrier Equipment Management Association (OCEMA), if they don’t change their chassis-leasing practices.

IMCC Executive Director Tyler Rushford said shipper-employed draymen have been overcharged to the tune of $1.8 billion over the past three years as a result of the chassis-leasing companies offering better deals to the ocean carriers.

“We want a fair system. We want a system that works,” Rushford said during the Agriculture Transportation Coalition’s virtual conference on May 20.

Rushford warned if the current commercial situation for chassis does not improve, the IMCC is prepared to file legal action.

Ryan Houfek, chief commercial officer for DCLI, fired back at the IMCC’s claims, saying that “a third to a half” of all container movements in the U.S. today move on chassis owned or leased by trucking companies. He said these operations are growing and have been “taking share” from the chassis pools for years.

Houfek said a national gray chassis pool operation would be akin to a “Democratic People’s Republic of Chassis,” a reference to China’s state ownership of certain industries, adding that the concept “flies in the face of open-market solutions in this country.”

He further warned that a government-influenced neutral chassis pool would lack incentives to invest the tens of millions of dollars a year to maintain chassis equipment.

Houfek described the current chassis arrangements as “market choice in action.” He said if the chassis-leasing business were not already competitive and up to date, the business would come under the trucking companies’ control.

Jennifer Polli, TRAC’s president and CEO, said “choice and competition [for chassis] are alive and well” in the U.S. but acknowledged that each chassis pool throughout the country may have slightly different operations due to the local shipper markets.

In May 2019, Federal Maritime Commissioner Rebecca Dye said a “supply chain innovation team” of industry representatives found that the most critical need for improvement in freight velocity and fluidity in and out of the rail ramps in Memphis is for a “single interoperable gray pool.”

U.S. cotton shippers rely on merchant haulage with their truckers to move container loads of cotton to intermodal railheads and the seaports.

“We’re going to face volatility because of COVID-19 and that will identify the weak points in respect to supply chains and geographies as we move forward,” he said. “We’re fully supportive of industry-led solutions” to improving chassis management.

One industry expert said it is time for the ocean carriers to get out of chassis altogether. “I think it’s creating artificial market rates and inefficiencies in the market,” said James Ford-Hutchinson, director of sea freight at freight forwarder Flexport.

Ford-Hutchison recommended that the industry begin working with the railroads and other industrial property operators to create gray chassis pool solutions. “Let’s do this before a [government] solution is thrust upon the industry,” he said.