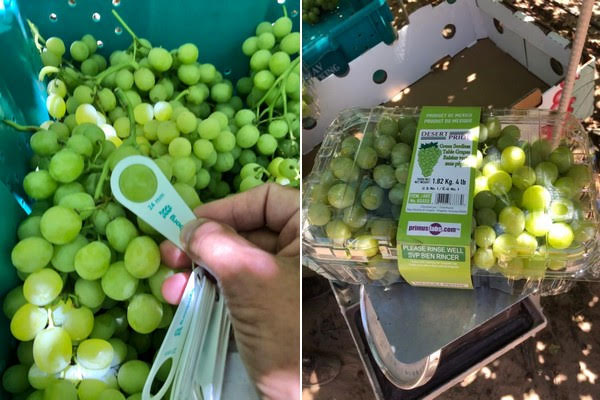 An Early Look At The Mexican Grape Season

A very early look at the Mexican grape season indicates a growing shift to newer varieties of grapes.

The Northern Mexican grape season generally begins in early May and goes until the first or second week in July.

Miguel Suarez with MAS Melons & Grapes visited two key Mexican growing regions recently, starting with Hermosillo in early January. “One thing that caught my attention is that some vineyards hadn’t been pruned yet. Normally by that date they are,” he says. “One reason might be that every year there are more and more new varieties of grapes. These new varieties are later by nature so that might be why.”

Low temperatures and grapes
Suarez also visited Caborca last week which at the time was experiencing lower temperatures. “I thought there was going to be more damage because temperatures were down to probably -2 Celsius. But the stage of development of the vines was still in the very very early stage so there was very minimal damage,” he says.

Overall acreage in these growing regions is roughly the same amount but Suarez notes again the shift towards replacing traditional varieties such as Flames and Sugraones with newer ones such as Sweet Celebration, Sweet Globe, Ivory, Early Sweets, Jack Salutes and more. “However even though they’re bringing in newer varieties, some have kept older ones producing until the new ones start producing,” he adds.

The varietal switch may make for tricky timing between the switch from the Chilean grape season to the Mexican one. (Last year Chile ended its season early due to late rains which affected largely green grape supplies.) “This year if everything goes well in Chile there still could be a gap because of the newer late-producing varieties,” he says. He notes that Chile could go with supplies until May 15-20 while Mexico won’t see significant volumes at least until May 20th.

March is key
However, Suarez says it’s very early in the growing season for Mexican grapes. “March is crucial as to what will happen with production. Last year the volume from Mexico was 20 million boxes. That production was a little lower because the potential in Mexican grapes is a little higher,” he says. “That’s determined by March–the weather. By the beginning of April, we’ll know how the volume will look.”

All of this comes following strong demand over the winter for grapes. “But in the winter, the majority of grapes go from Chile or Peru to the East Coast ports. So January was difficult, mostly because of logistics–not a lack of grapes,” Suarez says. “And there was very little fruit coming to the West Coast because the California ports had difficulties too.”

As for prices, the winter season has seen higher pricing on grapes. “The whole month of January, prices were mid-$30s. Right now they’re still in the low to mid $30s. We’ll see how long that keeps that high,” says Suarez.