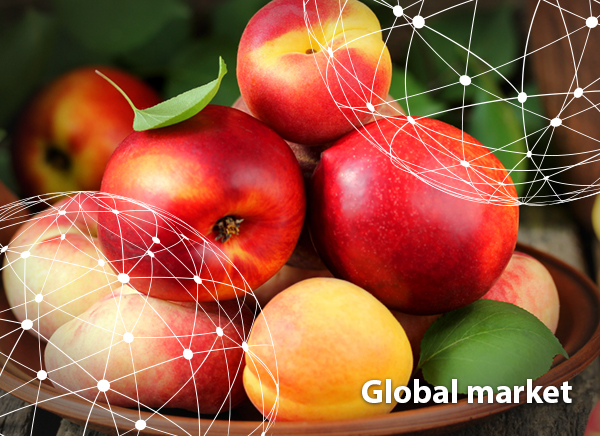 The European production of apricots, peaches and nectarines is estimated to be lower than last season. This is due, on the one hand, to long-term developments, and on the other hand, to the weather conditions ahead of the harvest, including a mild winter (which is not very good for the apricots) and a late frost in Aragon, Catalonia, the Rhone Valley and northern Italy.

In the US, California has also had to deal with such weather conditions. Italy in particular was affected by frost, and compared to last year, Emilia-Romagna (Europêch 2020) expects an 80% reduction in the harvest. The Italian volume is therefore expected to fall below 1 million tons, which is something that has not happened in 25 years. The issue that the sector is most concerned about is the coronavirus crisis and its future development. Will borders within Europe reopen for tourists or will they remain closed? In any case, the demand from supermarkets is keeping the overall demand high. Australian products were more affected by the coronavirus when many of the export products were stuck in the ports and could not be taken out from the reefers.

The Netherlands: High demand, limited availability of stone fruit
There is currently a high demand for nectarines on the Dutch market, but there is little product available. Importers expect prices to remain at high levels until northern Spain hits the market. The supply of Paraguayo peaches is growing steadily. Their sale is also going well, with prices at a fairly high level. The demand for peaches is mainly for large sizes, as the small sizes are more readily available. The prospect is that as the supply on the market increases, prices will drop slightly.

Germany: Large-sized nectarines are in great demand
The stone fruit season is currently in full swing. Last week, the first Paraguayo peaches from Spain arrived in the German market, so now the entire stone fruit range is available. “The demand for stone fruit is quite good across the board,” said an importer. “The larger-sized nectarines are particularly popular with consumers at the moment. Peaches are also doing well, although nectarines have generally generated more sales in recent years.”

At the beginning of the season – which started just before Easter – the storms in Spain raised the concerns of the stone fruit sector. Due to the amount of rainfall, the harvest of the first apricots of the season had to be delayed. Despite the difficult start, the supply now seems to be going back to normal. Now we have to wait for the first French apricots. Small volumes are already available on some German wholesale markets, but most importers are still waiting for the first deliveries.

France: Smaller apricot harvest due to weather conditions
The apricot harvest started in south western France last week, a week earlier than last year; however, rain and hail have damaged much of the production. The volumes coming from the field are therefore smaller, while the demand for stone fruit is good and prices are high. The arrival of the first peaches and nectarines is scheduled for next week, with better quality expected for peaches than for nectarines. There have been some problems with diseases and the weather conditions, but good volumes are expected.

Record temperatures and warm weather in several Northern European countries are also giving a boost to the demand for stone fruit. Because of the coronavirus, people are also more concerned about healthy eating. Although the sector initially suffered from the lockdown and the measures in various countries, the demand from supermarkets has kept sales high and cold stores have been left empty at the end of the day. The demand is also expected to continue increasing as a result of the reopening of the catering industry in Europe. The loss of tourism in Spain was still a concern at first, but the demand in the countries where these tourists often come from is increasing and that is keeping things in balance.

The reduction in the production volumes in Spain and other Mediterranean countries is having a direct impact on prices, which are higher than last year. A total of 1,414,913 tons of nectarines and peaches are expected, which is 12% less than last year. Nectarines in particular have been affected by low yields per hectare and some quality problems, so their production is 20% smaller than last year. Still, this fruit’s demand has increased the most. Peaches and Paraguayo peaches have seen a rise in both the demand and prices.

Apricots are also quite scarce in the market, but there is more speculation regarding the sale price. This year there is more demand and a higher price (depending on the quality). The demand is higher because many traders who normally get their goods from France and Italy have also been looking in Spain. The volume of apricots is estimated at 93,740 tons (15% less than last season). This reduction is mostly a consequence of the cold winter and frost in Catalonia and Aragon and the hail storms in Castile-La Mancha in early April. Catalonia has lost 26% of its production due to frost in Tarragona and Lleida. The high prices for peaches, nectarines and apricots are expected to stay at that level throughout the season. The harvest in Aragon, Catalonia and Extremadura will be hampered by a shortage of field workers due to the border restrictions introduced to prevent the spread of the coronavirus.

Italy: Further decline in stone fruit volumes
The volume of stone fruit is low this year. This is due to structural problems that have been going on for years, but also because it has been difficult to find workers this year due to the coronavirus and the late frost, recorded between late March and early April. The total volume of apricots is estimated at 136,000 tons; 56% less than last year and 40% less than the average between 2014 and 2018. After years of expansion, the acreage has not changed this year. For peaches and nectarines, the volume has been predicted to reach almost 820,000 tons (28% less than last year). This drop is not only due to this year’s circumstances, but also to a reduction in the acreage, which is down by about 5% each year. For the Pavia, the reduction reaches up to 44% compared to last year.

The harvest of apricots in Emilia-Romagna started on May 10 with good market demand. The stone fruit harvest has also started in Apulia (Patagonia nectarine) and Basilicata (Mogador and Pricia apricot, and later also the Flopria, Orange Rubis, Kiota, Faralia and Farbela). In Calabria, the Mikado apricots are currently being picked and handled immediately for their sale to supermarkets in Italy and Austria. In Sicily, the production is in line with last year’s. The focus is on the early varieties and there has been a 10% increase in the average price. The price at origin amounts to around 0.40 and 0.70 Euro / kg. Foreign competition from Spain and Greece is also strong this year.

Greece: 10% lower production this season
Out of all European production countries, Greece is the largest Pavia producer, with an estimated 415,000 tons this year (8.17% less than last season). Looking at the total stone fruit production, the volume is expected to fall by 9.6% compared to last year. Frosts in Macedonia, where the bulk of the stone fruit is grown, is one of the causes. Still, the volume expected is 3% higher than the average for 2014-2018.

Turkey: Uncertainty about the demand for stone fruit
In Turkey, the sector has noticed that the demand for nectarines is a little slower than last year. Customers aren’t as keen as usual to buy the fruit because of its shorter shelf life. Nevertheless, the situation is expected to improve somewhat, so the country could still increase its exports. “The quality is good, the volumes are good, but the demand is lagging somewhat behind,” said a Turkish exporter. “The shelf life is a little shorter than that of the Spanish competition.” However, the country’s exports consist mostly of peaches and apricots, and these fruits record growth every year. The volumes in 2019 were smaller than in 2018. The Turkish season runs from May to September; it starts in the southeast and continues in the Mediterranean coast and then the north. Turkish stone fruit is mainly intended for markets like Russia, Ukraine, Romania, the Balkans, Germany and Iraq. Small quantities also go to Belarus, the UK, Latvia and Lithuania.

China: Reduction of exports expected due to declining demand in Southeast Asia
The stone fruit season has started in China. The first early peach varieties are now coming from Hubei, a large production area with a focus on peach cultivation. The market is still a bit stiff and sales are therefore slow; however, there is still demand from the Chinese stone fruit market, so sales continue. This year, several areas suffered the impact of severe hail in April, which took a toll on the stone fruit supply as a whole. In some cases, half of the harvest or more was lost. The varieties now hitting the shelves are early ones. In June, the total production will quickly increase.

Besides the domestic market, a part of the volume is exported to countries in Southeast Asia. Here, however, the demand has fallen considerably and it remains to be seen how the situation will develop. China also imports a lot of stone fruit. This year, the season of Chilean sugar plums went very well. Some stone fruit also arrives from Australia every season.

North America: Smaller stone fruit sizes
The volume of stone fruit on the North American market is expected to grow in the near future. The prospect among growers in California is that the fruit’s sizes will also improve, because these are currently on the small side. A shorter period between the flowering and the harvest and extreme temperature swings in California are thought to be the cause of the smaller sizes. Growers are satisfied with the quality of the fruit, which is better than in previous years.

The season started a week later compared to last year and was then delayed. As a result, the stone fruit season is expected to last for longer in California. In June, producers expect to be able to supply larger sizes; nevertheless, the demand from retailers remains good and prices have not changed significantly compared to last year.

The state of Georgia expects a large volume of peaches, although it won’t be reaching last year’s figures, which were record-breaking. Despite the fact that peaches don’t have a long shelf life, the demand for the product is very good. Peach prices are also comparable to last year’s.

Australia: A lot of stone fruit stranded in ports due to the coronavirus
The Australian sector is mostly satisfied with the 2019/2020 season, and the fruit’s rising value. Although there have already been quite a few challenges at both national and international level, the actual impact of the coronavirus crisis on the market remains unclear, as the virus started spreading strongly during the export season. For example, part of the production was stranded in the ports and the fruit could not be taken out from the reefers. In terms of cultivation, some regions had to deal with hail or high water costs. In the 2018/2019 season, increases have been achieved by both apricots (+17%, to 9,027 tons) and nectarines / peaches (+4%, to 119,775 tons).

New Zealand: Focus on 2020/2021 season
In New Zealand, apricot exports rose by 50% and other fruits also saw their exports increase. In fact, Hawke’s Bay in New Zealand had one of the best production seasons in years. The country’s focus is now on the 2020/2021 season.