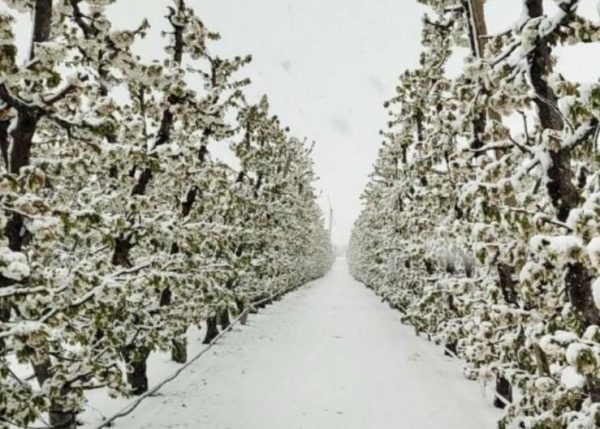 While the Northwest cherry season is likely to extend into September, crop volumes keep getting smaller because of April’s cold and snow, according to B.J. Thurlby, president of the Yakima, Wash.-based Northwest Cherry Growers.

Thurlby said a fourth crop estimate will be released in early July and the final crop number could be perhaps a million boxes or so lower than the 14 million box projection, he said.

Because the California cherry crop finished by mid-June this year, there was very little overlap between the two major growing regions this year, he said, straining tight supplies even more.

“Last year, [California] shipped all the way into July, and this year they were done by June 8. We didn’t start picking until June 10,” he said.

“It is just a really short crop, and I feel sorry for my growers,” he said.

However, the USDA on June 30 reported New York City terminal market wholesale prices for Washington sweet red cherries ranged from $110 to $120 per 18-pound carton, compared with about $50 to $54 per carton at the same time last year.

Retail promotions of cherries also are pricier this year.

Thurlby said he has seen ads running from $3.99 per pound to $7.99 per pound, with higher delivered costs to the East Coast reflected in pricier retail cherry prices there.

Export demand has normalized compared with the height of the COVID-19 pandemic. Markets such as South Korea, Vietnam, Malaysia and Thailand show improved demand compared with last year, Thurlby said.

A six-inch snow during cherry bloom on April 12 caused problems for the crop, Thurlby said. Those problems are showing up now with variable fruit maturity and reduced fresh packouts, he said.

“What we’re seeing is there’s less fruit going into a box than what’s coming out of the orchards,” he said. While the fruit being packed is gorgeous and eats very good, packouts are down compared with vintage years.

“When it comes to the packing shed, on a year when the fruit is really clean and running well, we will run 90% of the fruit into the box,” he said.

This year the packouts during the two weeks since harvest started in mid-May have been running closer to 70%, he said.

“It is not that the fruit is soft or doesn’t have sugar, it is because of what happened with the snow at bloom,” he said. Orchards are producing fruit with two distinct ripeness stages. Field workers are told to pick all the red cherries, and packers are finding that a higher percentage of fruit than usual is slightly under-ripe and not good for the fresh market.

“Growers are bringing the fruit in and they’re only getting 70% to 75% of their fruit into the box, so that’s a real challenge,” he said.

Growers already started out with a reduced crop, and the lower packout knocks down returns even more.

“An average yield here in the Northwest would be five to six tons to the acre and there are some growers out with certain varieties they can get over 10 tons to the acre,” he said. This year, at least for the early part of the Northwest season, yields have just been two and a half to three tons per acre.

“And when you take 30% of that out and say it’s not going to go into your finished product, growers are struggling,” he said.

The snow in April created a lack of pollinating activity by bees.

The crop was about 60% in bloom when the snow hit, and temperatures were below 50 degrees following the snow, which put the trees back to sleep for another 10 days, Thurlby said. Since bees like to work when it is 55 degrees or warmer, the extended cold took a continuing toll on pollination, he said.

“Not only did we see the blooms that may or may not have been pollinated kind of wilt down because they were snowed on, [then] you also had no bee activity regardless, because they didn’t come out because [there] was snow on the ground, and it was too cold,” he said.

After a week of dormancy, some of the trees started to bloom again, with about seven days between pollination compared with the earlier bloom.

“It was absolutely brought on by the snow and the lack of pollination during that window,” he said. “What we’re feeling now is that, you know, the cherries have been pretty well received, and we’re happy with what we’re seeing as our finished product.”

Growers with cherry trees that weren’t in bloom on April 12 may see a more normal “back end” of the season, Thurlby said.

“I think most growers on the northern part of our production regions will tell you that they’ve got a better crop than the crop that we’re seeing on the front end of the season,” he said. However, no growers are saying they expect a bumper crop, he said.

“Not one grower is saying that this year,” he said.

Some years a stretch of hot weather can push the growing districts together and speed the season up.

This year, that doesn’t appear to be the case, he said. in late June, temperatures have mostly stayed in a range of 75 to 85 degrees, which is “perfect” cherry growing weather.
Some growers in late districts say they will be picking around the end of the first week of September, Thurlby said.