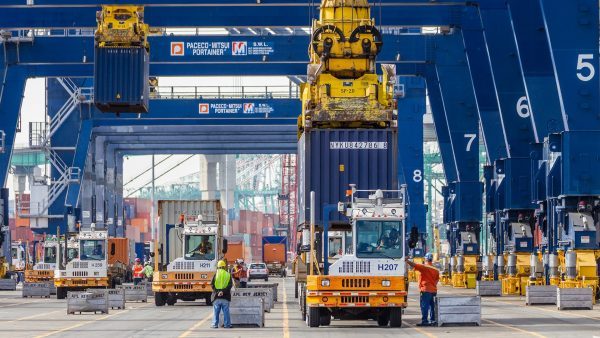 Port congestion that has snarled supply chains for more than a year could soon get worse if negotiations for a new contract between West Coast port operators and dockworkers don’t go smoothly. The rocky history between management and the stevedoring union has shippers buckling in for a stomach-churning year of late shipments, stockouts and soaring transportation costs.

On Thursday, the National Retail Federation urged the Pacific Maritime Association and the International Longshore and Warehouse Union to begin talks immediately on replacing the current contract, which expires June 30, to avoid worsening backlogs from rampant consumer demand colliding with COVID-related labor, equipment and facility shortages.

The trade association warned that a delay in contract negotiations would harm companies and consumers that rely on the West Coast ports and force shippers to consider other gateways, especially with the contract deadline falling before the peak shipping season begins for holiday merchandise.

Automation and compensation are considered the main sticking points. The ILWU has a reputation for hard bargaining and enters the talks in a strong position. The union is expected to leverage the congestion to pressure container lines and their terminal partners, while insisting its highly compensated members are due a cut of carriers’ record profits, which Drewry now estimates at $190 billion in 2021.

“Both parties should attempt to reach a contract well before expiration for the benefit of the national economy and to provide the needed certainty to all the stakeholders in the supply chain that rely on the U.S. West Coast ports. We would further ask that you issue a statement committing to the commencement of meaningful negotiations now, and to commit to continue negotiating and working without interruption, even if negotiations extend beyond the June 30 contract expiration,” NRF President Matthew Shay said in a letter to the PMA and ILWU leaders.

Even without a lockout or strike, dockworkers could drag their feet processing containers if the negotiations aren’t to their liking, adding to costly delays and record inflation the Biden administration is struggling to contain. The greatest potential for disruption is at the ports of Los Angeles, Long Beach, Oakland and Seattle/Tacoma.

Shay said many retailers are implementing contingency plans to prevent goods getting stuck, adding that “even the perceived risk of a disruption will force retailers and other shippers to reevaluate their use of U.S. West Coast ports.

“Without a clear commitment to keep negotiating, cargo shifts to other gateways would likely happen even if a disruption never occurs, simply due to the need to mitigate the risk of a disruption. We urge you to begin contract negotiations now and to attempt to reach agreement on a new contract before the June 30 expiration. Both parties must recognize their critical role in the global economy and the need to ensure predictability and reliability for the many diverse stakeholders that rely on the ports. An early contract agreement will benefit all parties, ensuring continued cargo growth for the region,” he wrote.

How did we get here?

The current contract is a three-year extension of one agreed to in early 2015. PMA President James McKenna late last year suggested the sides extend the contract by a year to first get port conditions back to normal, but the union rejected the offer.

In 2002, management locked out the longshoremen for 10 days after a costly work slowdown, triggering a backlog of container ships that wasn’t resolved until President George W. Bush invoked the Taft-Hartley Act and ordered ports to reopen.

Negotiations were less troublesome in 2008. The ILWU agreed to automation, but with many conditions that gave it power over projects. The PMA has said that the value of wages and benefits it agreed to for the right to automate has cost its members $800 million.

In 2014, negotiations started a month before the deadline and lasted 10 months. Port conditions deteriorated as longshoremen called in sick or didn’t show for assignments. The number of crane moves fell from about 25 to 27 per hour to eight. By early 2015, there was a queue of 40 vessels outside the Southern California ports — seemingly tame compared to 100 waiting vessels in recent periods, but considered extremely harmful at the time. Once there was an agreement, it took six months to unclog ports and restore fluid operations.

With ocean carriers making 50% margins and profits 20 times greater than in 2019, the longshoremen’s union seems intent on getting more of the pie. In the January issue of  The Dispatcher newsletter, ILWU Coast Committeeman Frank Ponce de Leon characterized foreign shipping companies as pandemic profiteers that hiked import rates 2,000% and denied American exporters boarding opportunities so they could return empty boxes back to Asia, where rates are much higher.

The jingoistic commentary cast dockworkers as the “last remaining U.S. connection” at major trade gateways and defender of farmers, truckers and warehouse workers, who don’t enjoy the same collective bargaining rights, against foreign carriers and their terminal subsidiaries that are offshoring labor savings.

West Coast dockworkers are among the highest paid industrial workers in the world. A general longshoreman who works at least 2,000 hours makes about $200,000 per year and foremen can earn $300,000. The ILWU disputes those figures, pointing to the $45 per hour base wage. But most hours are subject to automatic multipliers for different shifts and other factors that quickly add up. For example, 80% of all work includes skill bonuses ranging from $2.40 to $5.80 per hour, while evening and nighttime work is paid at $60 to $81 per hour. Overtime, which includes weekends and accounts for 35% of all hours, pays $67 to $91 per hour, according to the PMA’s annual report. The compensation package includes pension, health care with no premiums and $1 copays.

West Coast ports last year processed a record amount of ocean trade representing about 58% of the trans-Pacific eastbound imports for the U.S., but the growth was more than the system could absorb. The ILWU, for example, normally dispatches six gangs to work a large ship, but only four crews get assigned now because of COVID precautions.

And the workload could soon spike. The container vessel queue waiting to enter Los Angeles and Long Beach is down to 66 ships, but one explanation is that China manufacturing fell off during the Lunar New Year holiday. An onslaught of ships with catch-up cargo is headed to U.S. ports, according to Sea-Intelligence. Conditions will be difficult even without the specter of work interruptions associated with a port labor contract.

West Coast ports are some of the least efficient in the world: Seattle ranks 206, Los Angeles 328, Oakland 332 and Long Beach 333 out of 351, according to a port productivity index compiled by the World Bank and IHS Markit. Benchmarking so many disparate ports may not fairly weigh all the factors impacting performance, but the document broadly indicates that the West Coast ports are much slower than their peers in loading and unloading vessels.

Automated stacking machines, yard tractors, truck gates and even ship cranes could help speed up container handling, but ILWU opposition toward technology has increased over the years because of a desire to preserve jobs for family and friends. Partial automation exists at a handful of terminals in Los Angeles/Long Beach.

The California Labor & Workforce Development Agency recently named members to a panel studying the impacts of automation at the ports of Los Angeles and Long Beach. The study is required by a 2020 state law supported by the ILWU. Recommendations are due by July 1, 2023.

In the past, the container lines have agreed to compensation increases to avoid costly labor actions that would disrupt their entire networks, a person familiar with the process said.

The ILWU “is thinking they hold all the cards. In a distressed market they have more leverage than most years,” said Brady Borycki, executive vice president of global business development at Wen-Parker Logistics, in an interview.

Politics will influence the talks. Democrats control the White House and the House of Representatives, with President Biden often speaking about the need to reinvigorate American unions. But both sides need to walk a fine line because Americans are frustrated after 18 months of shipping delays and severe inflation that have impacted everything from air fryers to automobiles and building materials. Holding up the flow of goods and adding further strain to the economy could cause a public backlash, industry officials say.

Businesses are already taking steps to avoid getting their cargo trapped at West Coast ports this summer. Tactics include ordering goods earlier than normal, utilizing alternative ports in Canada, the Gulf and East coasts, Mexico and utilizing air cargo, according to logistics professionals.

Shipping to the East Coast always costs more, but the price differential in new contracts being negotiated for the upcoming season is already higher because of the high demand, according to a freight forwarder who didn’t want to be named.

But alternative ports may not provide anticipated relief because many are at 100%, or more, capacity utilization. The number of ships loitering outside East Coast ports is reaching all-time highs, led by Charleston with 31 container ships offshore. And data shows a 60% increase in vessel arrivals from Asia in the coming months, FreightWaves reported.

“It’s very clear that there is zero buffer capacity to divert to Canada or Mexico or the U.S. East Coast,” Lars Jensen, CEO of Vespucci Maritime, said during a webinar organized by freight forwarder Flexport. “That will just move the congestion problems up a notch in those areas.”

Another school of thought suggests importers sit tight and wait out the negotiations. Rerouting could be expensive, warehouse space might be difficult to find and the ILWU contract might get resolved faster than expected.

If the West Coast talks bog down, “everything is going  to slow down, not just in the U.S.,” said the logistics industry source, who put the odds of a labor action at about 25% right now.

Jensen said he expects an on-time agreement because there will be tremendous pressure on the union to make economic conditions worse and “the carriers have learned over the last 18 months it doesn’t matter if you charge a customer $50 or $100 more because they’re paying $5,000 to $10,000 more [on shipping]. So they can certainly live with a deal that becomes a lot more expensive.”

The deal will likely include much higher wages for the port workers in exchange for more openness toward automation, as long as it doesn’t cost any jobs, he predicted.

Between now and then there will be dramatic statements by both parties about a stalemate and the potential for gridlock, but that will be purely tactical posturing and not the reality of their actual positions, Jensen said.