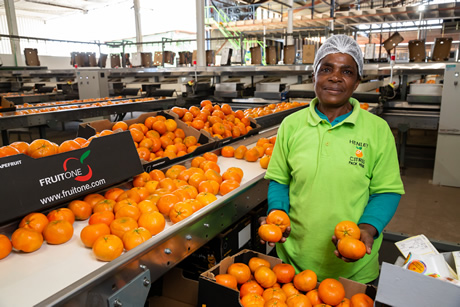 Rain in Argentina, delays from South Africa and Argentina and temperatures in Western Europe in July between 20 and 40 degrees Celsius: citrus sales haven’t been easy. Andres Ribas of Oosterom of Vientosur / FruitOne Europe sums it up.

“It was hard for Argentinian lemons to come in at the start of the season due to the large supply from Spain. There was more space for the lemons after that, but the loads were considerable lower due to the extreme phyto controls and rain,” says Andres. “The South African season is also a logistical drama due to strikes at the terminals and the port capacity with up to three delays per vessel. Of course this situation creates opportunities, but it also causes a lot of headaches trying to meet the programmes.”

“The South African grape fruit arrived on an empty market and went into its traditional decline in recent weeks. Less grapefruit was sent compared to last year, which we will notice over the coming weeks. The varied temperatures in Europe didn’t help the sales. One day was melon weather, while the next called for a hot mug of soup,” laughs Andres. “The stocks have now cleaned up and the consumption is pulling up towards the end of the school holidays. Prices are between 13 and 15 Euro, dependent on the size and the quality in particular.”

“Mandarin sales were difficult for a long time due to the weather. The sales of the nets was tough. We did sell a lot of Tango and Orri mandarins in the programmes. You see that a lot of people opt for the better varieties, even during the heart of summer. The sales of mandarins was ahead in consumption, but oranges like Navels were lacking, the internal and external quality wasn’t great and the old Spanish supplies were in the way. After a difficult period at the end of July the market is now pulling up a bit again.”

“With the varieties like Midknight and Valencia Late from Argentina and South Africa we expect sufficient pressing oranges of good quality for the programmes. Although the prediction is that the supply of South African pressing oranges will be a lot lower than last year with an even bigger demand from Asia than in previous years.”