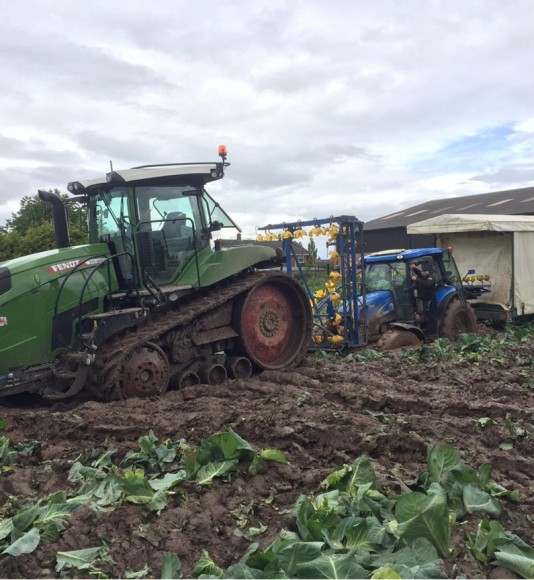 UK brassica growers are suffering the most severe and sustained flooding they’ve ever seen, according to a leading producer.

The experienced grower estimated that around 20-25 per cent of total UK production had been lost in the current season, with almost all growers across the UK’s brassica-growing heartlands of Scotland, Yorkshire, Lincolnshire and Cornwall affected in some way.

He added that the heavy rain – which began in the summer and is affecting a whole host of other products, including potatoes, onions, carrots and parnsips – will likely lead to quality issues since brassica crops have been sitting in water for a long time and are going into store wet.

“I’ve only been growing brassicas for 30 years, but we’ve got men on the farm who have been working in this industry for 40-plus years, and nobody has seen rain as heavy and sustained as we’ve seen lately,” he told FPJ. “Normally flooding comes and goes within a few weeks but this has been ongoing now since the summer.”

He added: “As a grower, you might have a handle on crops that are currently being harvested but when it comes to crops that still need to be harvested through until spring of next year it’s an unknown quantity.  “All we do know is that crops have been sat in water for an awful long time – they’re giving up, they’re dying, they’re struggling to cope with the conditions.”

According to MD of Riviera Produce David Simmons, who chairs the Brassica Growers Association, cauliflower is probably the worst affected brassica at the moment, and he thinks the next to be impacted will be cabbage.

“Spring greens are also starting to suffer now,” he added. “There’s so much water in the soil that the leaves are just turning yellow and falling off.” As well as leading to crop losses and quality issues, the floods have been preventing growers from getting out into the fields to harvest the crop, or at least making it very difficult. “With all the incessant rain, it’s difficult to travel across the fields to harvest because the tractors and rigs and everything, especially in Lincolnshire, are just sinking out of sight,” said Simmons. “When you do manage to pull the tractors through the water with other tractors you damage so much of the crop. So, as well as not physically being able to harvest sometimes, a lot of crops are being damaged when you do.”

Simmons estimates that cauliflower volumes are currently about 25 per cent down on normal levels, forcing suppliers to import from France, Spain and the Netherlands. The problem is that growers in continental Europe have also been affected by wet, cold weather and it has been impossible to import enough product, causing shortages on shelf.

For example, the UK is struggling to import enough broccoli from Spain – the UK’s dominant import market for the product at this time of year – following floods and cold weather in south-eastern Spain towards the end of September. “We’re short on cauliflower and broccoli on the shelves,” he said. “Spring greens are the next brassica that could be very tight, and pointed, Sweetheart and Tenderheart cabbage are starting to tighten up as well now.”

For the time being, savoy, white and red cabbage remain unaffected, but Simmons foresees potential shortages at the end of the season in March/April. “They’re all planted at the same time for the winter period,” the Cornwall grower explained. “You grow over a big area and keep going over them through the winter, so if the crop is being damaged now during harvesting, supply probably won’t be affected until the end of the season.”

When it comes to Christmas supply, he said “it’s going to be tight” and crops “aren’t going to recover very quickly”, but it’s still too early to say how supply will be affected over the festive period.

He explained that Lincolnshire has been particularly hard hit because of how flat the terrain is. “Because it’s so flat up there the water can’t get away, and a lot of the rain they’ve had in Yorkshire and on the eastern side of the country comes down on the river which goes right through Boston. You can’t drain the water off the fields into the river because it’s full.”

Going forward, the unnamed grower previously quoted believes customers need to appreciate the weather is “doing some unusual things that will impact on availability week in week out for as long as we can probably foresee”.

He stressed that the answer isn’t simply to switch supply to another country because there’s been devastation across Europe throughout the summer.  “It’s a global issue rather than a local issue,” he said. “There’s obviously some change to the climate – what the root cause of that change is I’ll leave to the scientists to procrastinate about.”