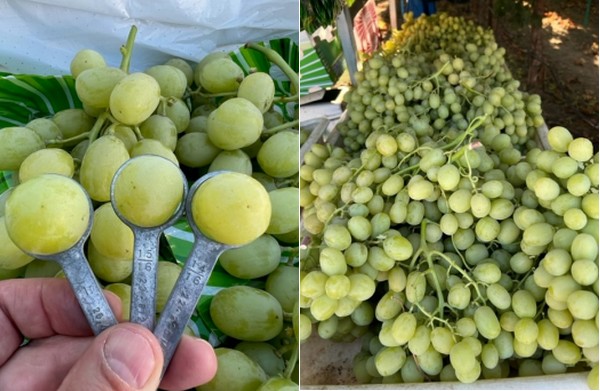 California Grapes Contend With Surprise Showers And A Heat Wave

California grape growers and shippers are waiting to find out how recent weather events will affect the current California grape crop. “We had a few surprise rainstorms go through the valley and we’re facing a pretty massive heatwave right now. We’ve had occasional heat throughout the summer in spurts but right now there are temperatures over 110 degrees,” says Mike Asdoorian of DLJ Produce.

He does note though that there is still plenty of fruit available and to promote. “If anything, it’s potentially shortened up the back end of the crop. As an industry we have to assess where total crop volume is going to finish out and it may be more of a question of what’s going to happen in November and December,” says Asdoorian.

Overall the California grape volume is down this year. Approximately 95 million packages were anticipated this year which is a slight decrease from last year–about a 10 percent drop off. “This is because of a freeze earlier in the season in the bloom stages of the vine,” says Asdoorian. “Initially that lower crop volume was around bloom set and the freeze and now the current weather conditions are taking their toll on the total volume already out there.”

Varietal notes
In varieties, Scarlet Royals are now coming on after a slower start because of the heat. “There are a lot of Scarlet Royals and that will be the majority of volume in red seedless grapes,” says Asdoorian. In addition, there are proprietary varieties such as IFG’s Sweet Celebration and Jack Salutes. Krissys have already finished. Green grapes are transitioning between varieties with Ivory, Valley Pearls and Great Greens finishing and most growers are going into Sweet Globe and Autumn Kings are already being picked. “They’re a little early this year. There’s also Autumn Crisp and that’s a favorite for export demand. The late side of the deal will be mostly Autumn King and Autumn Crisp once we get through the current green mix of varieties, so starting in October through December.” DLJ is also packing its Razzle Dazzle variety of grapes.

Following slower demand in the early part of August, demand has more recently picked up. “It was slow because some varieties, especially in green seedless, were on top of each other and inventories got a little heavy,” says Asdoorian.

A closer eye on quality
The challenge now is continually assessing this current crop contending with the weather conditions. “We’re working really hard to be out in the field and watching what’s going on. I think there’s going to be some damage done and the industry has to do a good job of packing good fruit so we don’t see a two-tier market,” says Asdoorian.

It’s also already time to consider what to do for the import season. “California could possibly come up light in December. If that’s the case, then we need to allow everybody to react and decide when we need to start seeing the first imported fruit,” he adds.

He notes while it’s packing its domestic Razzle Dazzle supplies, DLJ is already projecting the import season and determining when to bring in the first of its imported Razzle Dazzle grapes from Peru to avoid any potential gap in supplies. “Peru is going to have a good crop of grapes this year so they’ll have enough fruit to fill the pipeline,” says Asdoorian.