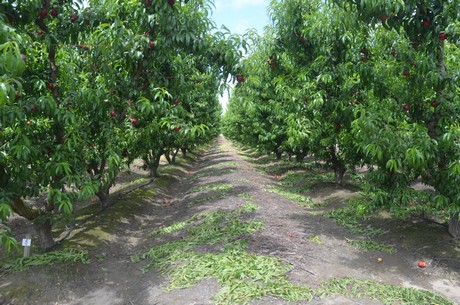 Production of California’s stone fruit is slow to start due to the unseasonable California weather.

“Any commodity buyer knows that it’s been a weather-filled last few weeks. It’s not just the rain itself but the overall lower temperatures have slowed down the volume of stone fruit right out of the gate,” says Jon McClarty of HMC Farms in Kingsburg, Ca., who adds that the stone fruit is currently coming mostly out of the Central California region.

McClarty adds that plums are the one stone fruit that hasn’t started in full production yet and is only seeing limited supplies right now. “But peaches and nectarines are seeing a bit of a slowdown because of the weather. Moisture on the fruit is never a positive thing,” he says.

As it stands, overall volume currently is lower than this time last year. “But going forward, it looks to be a pretty normal crop of stone fruit,” McClarty says.

Despite the extra rain, the sizing of the fruit looks as per usual. “We are losing some bigger fruit because of that, but most of the fruit that is on the tree is of normal size for this time of the season,” says McClarty.

Domestic competition
While imports of stone fruit have cleared out for now, McClarty does note that along with California production, peaches are also coming out of Georgia and South Carolina. “And later on in the season there are peaches grown in Colorado, Washington, Pennsylvania, parts of the Great Lakes regions, and other areas,” he says. California stays in production on stone fruit from some growers as late as October on peaches and even later on plums.

Meanwhile demand also looks stronger right now on stone fruit given the lack of supply. “We did get some pick up in demand for Memorial Day weekend but there was a little bit less fruit available,” McClarty says.

Despite the lower volume, stone fruit pricing is looking to be as per usual and close to last year’s pricing.

Looking ahead, McClarty sees more stability for stone fruit on the horizon. “I think all the growers are getting to a point where they’re getting a normal type of production for this time of year in the weeks ahead. It should be pretty stable until the end,” he says.