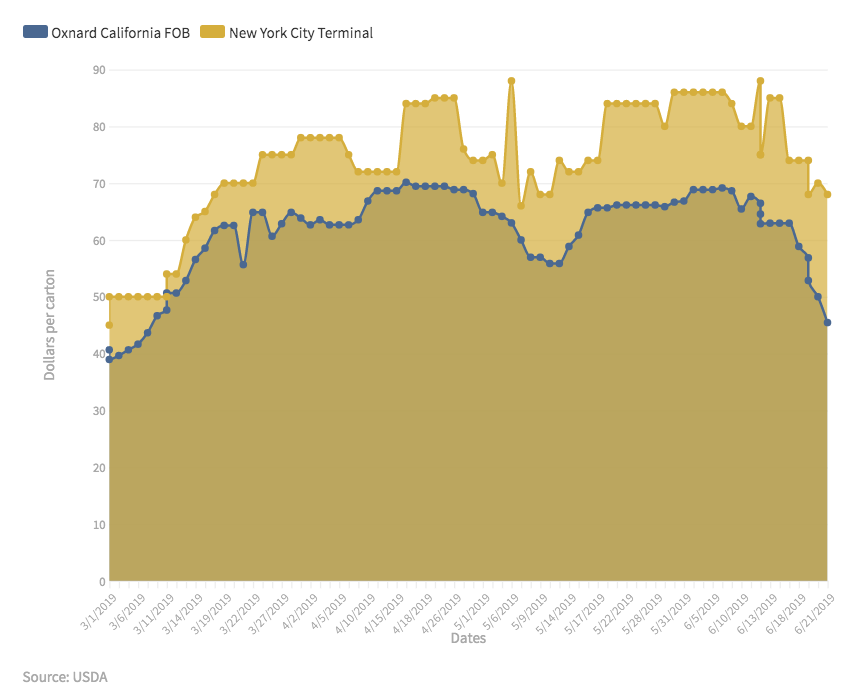 Is the celery market finally ready to settle down?

By settle down, I mean drop back to reality.

As illustrated in the chart, celery prices have enjoyed what seems to be an unprecedented level of premium pricing for months on end. Terminal market pricing in New York for cartons of 2 dozen approached $90 per carton for conventional product within the last month, and the lower range of f.o.b. pricing in California has been routinely above $60 per carton.

By way of comparison, pricing on June 21 a year ago was reported at $7-9 per carton f.o.b. in Oxnard.

Market sources attribute big pricing to reduced acreage/weather conditions and lower output, of course. But there also is a measure of strong and persistent demand for celery for juicing. Glowing, if unsubstantiated, testimonials on the benefits of celery juice from the “medical medium” Anthony William appear to be fueling at least some of the demand.

But celery supplies are beginning to increase and the market seems to be softer.

The Source market report from Pro*Act on June 19 said this about the market:

This commodity is softer in the marketplace. Part of the reason is because schools are out and production in Salinas has eased up demand for southern California production. Expect better availability of this commodity next week and continued lowered pricing. Demand is average. Production in Santa Maria and Oxnard has been getting stronger compared to past weeks.

Production in Mexico is light, overall. Some defects being reported include bowing, leafy tops, growth crack and mechanical.