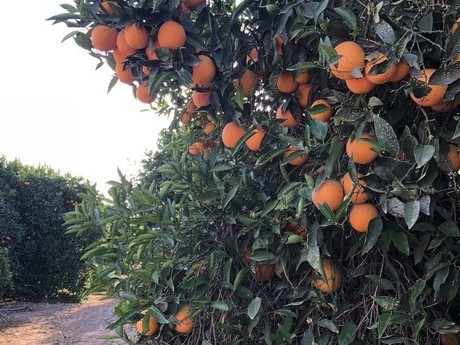 Following a tricky season, supplies of California Navel oranges are wrapping up.

“There are some California Navels still available on the market. But we finished last week. It was a pretty long season for us,” says Michael Chavez of Golden Star Citrus in Woodlake, Ca. Chavez says supplies of Navels began in mid-October and the season lasted longer than anticipated. “I thought I would be done at the end of May, maybe a week into June. But we went the whole month of June,” he says.

Going off the calendar looked to be a bit of a theme for the orange industry this season. “We followed our calendar of varieties but industry-wise, some varieties got behind and weren’t meeting demand quickly enough,” Chavez says. “Some early varieties were coming off mid-season rather than early or a mid-season variety was coming off really late in May when it should have come off in January or February.”

Issues of concern
He also adds that the heavy volumes of fruit, weather issues such as rain and hail and trade issues further challenged the movement of citrus. “It was a tough season. Compared to 2018, I don’t think there’s ever been two seasons that have been more different,” says Chavez. “Last season it was light crop, high FOB markets. This season was tons of volume and very soft FOBs and lacklustre demand. It was the polar opposite of last year.”

While California Navel supplies decline, California Valencia oranges continue in production and will push through until September with promotable supplies. “June was very strong in demand for Valencias—we had a lot of demand,” says Chavez. “Then it faded a bit in July. But it should pick back up in August with schools coming back.” Valencia oranges, which are the preferred juicing oranges and saw a slightly above average volume this season, will also see good demand with retailers with juice bars and supplies for school.

Pricing average
All of this puts pricing as “okay” levels. “Compared to last season’s FOBs, we’re averaging $16-$18/case right now. This season it is more around the $13-$15 range for a 40 lb. unit so it’s definitely a softer market this season,” says Chavez.

On the import side, Chile has begun shipping Navels into North America and has been doing so for over a week. “Chile will overlap into the start of our domestic Navel season in most years,” says Chavez. “This season they will. We won’t see a supply gap in citrus.”