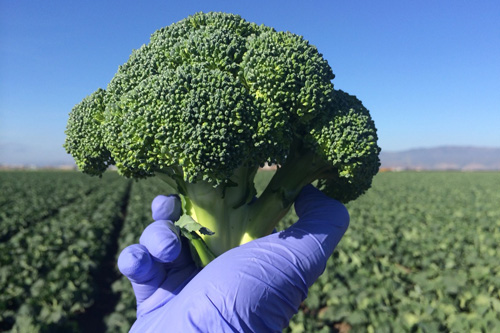 If you’ve taken a gander around produce aisles of late, you might have noticed that all things green are flying off store shelves and into consumers’ carts faster than ever. And since I’m a consumer first and a trade news writer second, maybe I tapped Jason Lathos, Manager of Commodities for Church Brothers Farms, more to assure myself that my next grocery trip would still be broccoli- and cauliflower-filled and less to check in on the market—maybe. Either way, here’s what Jason had to say about the state of the current broccoli and cauliflower season…

Jason Lathos, Manager of Commodities, Church Brothers Farms
“Broccoli and cauliflower are getting more popular year-round, let alone for just this time period,” Jason began to tell me. “Last year to date, the broccoli market for this time period was in the high teens, and this year the trend is the same—even though there are many different growing areas across the nation.”

Jason explained that this is because the start of the school year is already upon us, which always kickstarts demand into high gear. But even more than that, Jason attributed the increase in demand to the ever-rising popularity of both broccoli and cauliflower.

“In 2018, the cauliflower market was in the high single digits. This year, we are in the low twenties. The difference in demand is that cauliflower is getting more popular,” Jason said. “There are a lot of new ways consumers are using cauliflower and there seems to be a new recipe or application cropping up every week.”

And it’s true: Cauliflower is no longer just a vegetable. Instead, cauliflower is a center-of-the-plate star, with healthy and delicious recipes like rice, pizza, and more, only making that fact even more obvious amongst foodservice operators, retailers, and consumers alike.

“It’s awesome,” Jason continued. “As a result, I would say that the broccoli and cauliflower markets are more active than normal for this time of the year.”