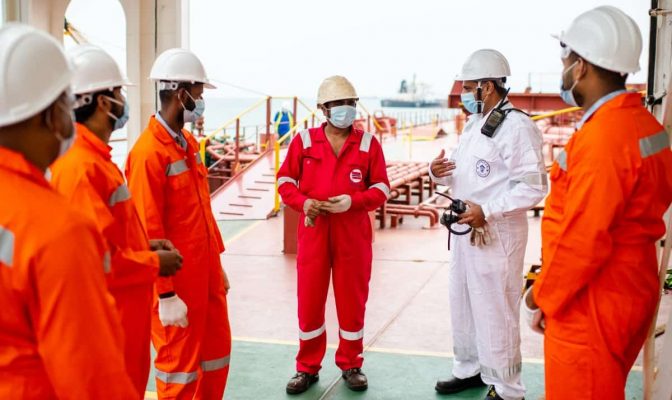 Crew Crisis Is On Verge Of Becoming Global Trade Crisis

Watching the growing threat to global trade from the stranded-crew crisis is like watching a train wreck in slow motion — and the governments of the world still don’t see it coming.

A June 15 deadline was set by the union representing seafarers, the International Transport Workers’ Federation (ITF), to resolve the crew-repatriation issue, get many thousands of seafarers stranded by COVID-19 travel restrictions back home, and designate all seafarers “key workers” who can travel unrestricted.

That deadline has predictably come and gone, and fallout for the global shipping industry and world trade now appears virtually certain. In the most extreme scenario, ships would be forcibly idled, tanker and bulk spot rates would rise, and container liner schedules would be thrown into disarray.

The ITF has just adopted a new strategy that it explicitly states “could be highly disruptive to global trade.”

Between mid-March and mid-June, the ITF and affiliated unions did not fight contract extensions for crew who were unable to be repatriated due to the pandemic. No longer.

According to ITF President Paddy Crumlin, “We have drawn a line in the sand and today is the day we make it crystal clear to governments that from June 16, seafarers are going to start enforcing their right to stop working and return home. No more contract extensions.”

Crew contracts last multiple months but cannot extend beyond one year under normal circumstances. Crew whose contracts had expired between February and mid-June have signed extensions and kept working, because they have been blocked by travel restrictions from getting home. The ITF estimates that there are around 200,000 crew working on coronavirus-induced contract extensions, including some who have been on board for over a year.

Seafarers are now being told: If your contract expires, or your extension expires, and you want off the ship, don’t sign another extension. The ITF will do its best to get you off.

“If you do not want to sign a new contract you are entitled not to do so, and the company cannot force you,” the ITF asserted to seafarers. “If the contract is imposed on you, you must report this immediately.”

If a seafarer’s employment contract expires when a vessel is at sea, the ITF told crew to continue working until the ship is at its next port, then stop working but always remain available for safety and emergency situations.

The ITF and its affiliates will focus on getting these seafarers off the ships when they get to port, through talks with relevant authorities in the port state (the country of the port of call). If it’s impossible to get the uncontracted crewmember off the ship before it sails again, the ITF said that the seafarer should not work, but “remain onboard as a passenger.”

That assumes the ship is even permitted to sail, as a commercial vessel is supposed to have a minimum number of active crew for safety reasons.

FreightWaves sought clarifications on how this new strategy would work in practice from Fabrizio Barcellona, assistant secretary of the seafarer section of the ITF.

Barcellona, who acknowledged that “we are in full crisis mode,” explained that if the number of active crew “falls below the number prescribed by the minimum manning certificate of the flag state, it will be the responsibility of the flag state or port-state control [PSC, the authority of the port state, such as the U.S. Coast Guard in America] to agree to allow the ship to sail.”

Barcellona said that allowing the ship to sail with below the mandated active crew “may have repercussions on safety, which may affect the charter party [charter agreement] and the insurance policies for the ship.”

If flag states and/or PSC authorities allow ships to sail under what the ITF deems to be unsafe conditions, “it is something that cannot be ignored and we will highlight situations we deem to be dangerous,” he affirmed.

The big question is how many of the crew currently working past their original contract expirations want to stop working, given bonus pay that’s being offered. Asked by FreightWaves, Barcellona revealed, “We have received thousands of messages that unequivocally indicate that seafarers want to leave the ships.”

In mid-May, when FreightWaves asked Barcellona whether the ITF was considering a labor strike by crew covered under collective-bargaining agreements, he demurred and said the ITF was still considering options.

The new policy beginning June 16 does not explicitly tell union members to stop signing contract extensions; rather, it emphasizes that the union doesn’t support extensions, that seafarers have no obligation to sign extensions, and that the ITF will do its best to help crew get home if they don’t.

Asked on Tuesday whether a future seafarer strike was still possible, Barcellona responded, “We cannot foresee the medium-term impact of the situation. Seafarers have rights, which have been disregarded.”

The logjam for crew repatriation is travel restrictions in countries the crew need to pass through to reach airports, as well as in two of the three top countries where most crew are from: India and the Philippines. The problem is less acute in the other top crew source, China, where turnovers of Chinese crew are being conducted at Chinese ports.

What comes next? Under the most extreme scenario, the number of active crew on ships would diminish over time as contracts and contract extensions expire and more and more crew transform into passengers. Even if some ships are allowed to initially sail with fewer than the mandated number of active crew, port states and/or flag states would eventually have to declare ships unable to sail.

Theoretically, the number of ships forced to sit idle would continue to increase until consequences for world trade become so severe that governments are finally compelled to lift restrictions on crew travel.

Until that breakthrough, it would be highly negative for the owners of tankers and bulkers rendered idle, as those ships would not be earning but would still be accruing costs. It would also be negative for bulk cargo shippers and traders, as fewer vessels would be available for spot voyages, meaning spot rates would rise.

Forced ship idling would create particularly costly complications in the container sector, disrupting scheduled liner services. If a loaded container ship in port was ordered not to sail and its active crew could not be increased above the required minimum, its container cargo would have to be transferred to another ship.

“If getting seafarers off these ships causes chaos in supply chains, if ports back up from Singapore to San Francisco, and if this causes ship insurance providers to pull their coverage and global trade to grind to a halt, then that is on the heads of the politicians, not the world’s seafarers,” said ITF General Secretary Steve Cotton.