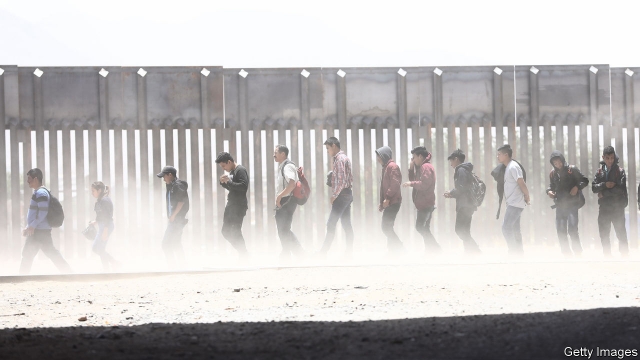 Donald Trump vows to use tariffs to punish Mexico for migrants

SEVERAL ADVISERS to Mexico’s secretary for foreign affairs, Marcelo Ebrard, receive phone notifications each time President Donald Trump sends a tweet. Phones—and alarm bells—were surely ringing on May 30th, when Mr Trump delivered his threat to apply a 5% tariff on all imports from Mexico. Unless the Mexican government takes action “to dramatically reduce or eliminate the number of illegal aliens crossing its territory into the United States”, the tariff is to go into effect on June 10th, and to increase each month until October 1st, reaching a maximum of 25%.

The trigger for the threat was not entirely clear. It could have been Mr Trump’s desire to shift attention away from news coverage of Robert Mueller, who said on May 29th that his investigation could not charge the president with a crime because to do so would have been unconstitutional; or it could have been meant in response to a video the president tweeted the day before, of more than 1,000 “illegal aliens” crossing into the United States. It could even have been data on the recent rise in the number of people apprehended at the border with Mexico: from 51,000 in April 2018 to 109,000 in April this year. (That figure should decline over the coming months, if it follows the usual seasonal pattern.)

Mr Trump’s statement accompanying the tweet was angry, strewn with capital letters and exclamation marks. “Gang members, smugglers, human traffickers, and illegal drugs and narcotics of all kinds are pouring across the Southern Border and directly into our communities. Thousands of innocent lives are taken every year as a result of this lawless chaos,” the statement reads. “It must end NOW!” This kind of fear-mongering has always been central to Mr Trump’s political appeal. At the launch of his presidential campaign, in June 2015, he rode down a gold escalator in Manhattan to denounce Mexicans “bringing drugs…They’re bringing crime…They’re rapists.” That rhetoric has worked well for Mr Trump in the past and may do so again.

Still, this approach may not produce all the results that Mr Trump desires. Maintaining America’s current levels of border enforcement requires the co-operation of Mexico’s government, which Mr Trump’s bellicosity does not make more likely to be forthcoming. And the “crisis” is in part the result of an increase in families from Central America seeking asylum, not the gang members, smugglers and human-traffickers that Mr Trump rails against. The Mexican administration has already increased its efforts to deport Central Americans from Mexico. Creating a regional economic-development plan to tackle the root causes of Central American migration, as Mexico’s president, Andrés Manuel López Obrador, has said he would like to do, cannot be done quickly or by any one country alone.

But a reduction in border crossings may not be the primary objective here: if the numbers go down, the president may claim victory and take it as proof that he can push around other countries. If the numbers do not go down, then he gets to keep the hordes of lawless Latinos as an issue in 2020. Most likely, given the president’s inattention to facts, he may claim both of these things to be true at the same time.

As with most of Mr Trump’s trade policies, the move displays all the finesse of an elephant attempting embroidery. Mexican lobbyists were under the impression that Robert Lighthizer, the United States Trade Representative, had been sidelined. Earlier proposals for tariffs have come with some sort of process or consultation, with Congress or the public. This one set a ten-day deadline and appears to include neither. Mick Mulvaney, the White House chief of staff, explained that this was not a trade dispute but “part of an immigration problem”.

If the tariffs are enacted, both national economies will suffer. Two-thirds of American imports from Mexico are between related parties, where one partner owns at least 10% of the other, so any tariff will cause problems along tightly integrated supply chains. A working paper by Alonso de Gortari of Princeton University published on May 27th estimated that America contributed 30% of the value of its imports of manufactured products from Mexico. Carmakers are particularly vulnerable—just as demand in America is softening anyway. The experience of tariffs so far suggests that the heaviest burden will be on American importers. A depreciating peso could soften the blow for them—if they can renegotiate contracts to reap the benefits of the lower currency.

In response to the threat, the peso fell against the dollar by around 2%, making Mexican exports fractionally more competitive. Futures capturing the expected value of the S&P 500 stockmarket index sank by around 0.9%. Yields on American government debt dipped, too, a sign of investors seeking a haven. The damage could spread beyond the direct economic hit, if it reduces the likelihood of passing the USMCA (the United States-Mexico-Canada Agreement), a trade deal between the three North American heavyweights. Chuck Grassley, an influential Republican senator, called the threat “a misuse of presidential authority”, and has noted that tariffs would “seriously jeopardise” the USMCA’s prospects. Embarrassingly, both Mr Lighthizer and his Mexican counterpart had sent a draft of the deal to their respective legislatures for approval that same day.

The damage could go further. Mr Trump was supposed to stop threatening Mexico with tariffs once it had agreed to the USMCA. Now he appears to have pocketed that agreement, and to have used the same threat to try squeezing out a separate batch of concessions. All this while the Trump administration attempts to force unrelated concessions from the Chinese, the European Union and the Japanese. They will surely ask: what is the point of conceding to a negotiator who does not keep his word?