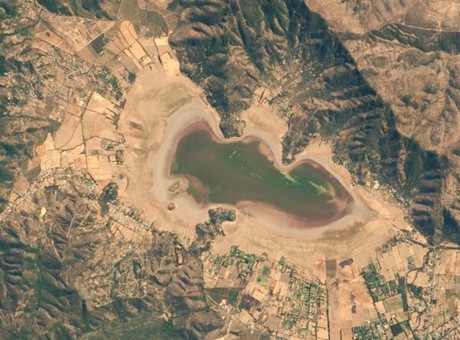 Central Chile is suffering its worst drought in 60 years. This includes the capital of Santiago, home to nearly half the country’s population of 18 million people, as well as the nearby region of Valparaiso.

Experts predict climate change, over-exploitation by agriculture and other factors mean the shortage of water will be permanent. Not only is this changing the lives of farmers and ranchers, but it’s also cutting into revenue from agricultural products sent on cargo ships from Chile to the US.

Santiago and surrounding areas are in the midst of what scientists have called a Mega Drought (MD) – an uninterrupted period of dry years since 2010. It encompasses a broad area with detrimental effects on water availability, vegetation and forest fires that have scaled into social and economical impacts.

Acuelo Lagoon was one of the main water sources for the afflicted areas, but it’s dried up for the first time in modern history. Many farmers’ wells are dried up, too, once able to irrigate crops twice a day. As a result, they’ve been going out of business and searching for new careers.

A WorldCity analysis of the latest US Census Bureau data shows Chile’s trade with the US rose to $13 billion through the first six months of 2019, but this is 4.13 percent below its total trade during the same time period in 2018. While, overall, Chile’s exports increased 4.07 percent, exports of drought-stricken agricultural commodities have taken a different course.

According to freightwaves.com¸ imports of grapes (fresh or dried) from Chile to the US fell 14.6 percent, to $659.91 million, for the same year-over-year period; strawberries, blueberries and raspberries combined fell 11.72 percent to $262.91 million. Among the top five US airports, seaports and border crossings that receive products from Chile, three of them – Port Everglades, Port of Panama City and Port of Philadelphia – had decreased volumes of imports.