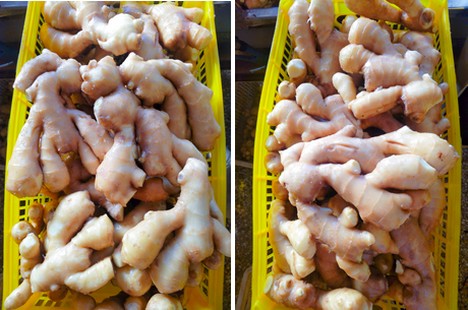 Ginger Production in Guangxi Much Lower This Season

This year’s unfavorable weather seen in various production areas has affected the overall production of Chinese ginger, which is significantly lower compared to last year, leading to rising export prices. Chai, manager of Taiyuan Food Co., Ltd. in Ju County talked about the market and export situation of ginger from Guangxi.

“The rainy weather has led to a lower yield of less than 2,000 kg/mu in the production areas in Guangxi, almost half of that of last year. The current purchase price at the place of origin is about 2.8 yuan/half a kilo. The FOB export price is 9,500 yuan/ton, which is an increase of 15% compared with that of 8,100 yuan/ton during the same period last year. Due to the rocketing high prices of Chinese ginger this year, many customers in Europe and the United States have switched to products from South America, which has had a certain impact on Chinese ginger export. “

“Since last autumn, China’s production has continued to decrease. Taking the European market as an example, over past years, April to June was the off-season for this market, but this year, it has extended to April to September,” Chai said. “Our overseas markets mainly include Europe, North America, and Dubai. Among them, Canada, being our largest overseas market, absorbs about 150 containers per year.”

“As we all know, Shandong is a big province for ginger cultivation in China, but in fact, Guangxi is also an important ginger growing region. As ginger cultivation in Shandong has become saturated, more and more growers are turning to Guangxi. The acreages dedicated to growing ginger in this province have been increasing at a rate of 30% every year, and these cultivation centers are all developed from bare fields. We have been growing ginger in Guangxi since 2013. Currently, we have about 1,300 mu of regular ginger and about 800 mu of organic ginger there. “

When comparing ginger grown in Shandong with those grown in Guangxi, Chai said, “Ginger from Shandong is full in size, weighing up to 1.5-2 kilograms, and has a bright color and plenty of juice, suitable for juicing. Ginger from Guangxi is smaller in size, lower in moisture, has more fiber and is spicier, suitable for making dried ginger products. Ginger from Guangxi has only gradually become known in the market within the past two years. Guangxi ginger is not as big and smooth as those from the north, and its color is not very appealing, somewhat gray. Compared to 7,500 kilos in Shandong, the production in Guangxi is only about 4,000 kg at the highest point. However, as Guangxi is not fully developed, the quality of the soil is good, and the products are usually grown on hills, therefore are more natural and have less chemical residues. 80 % of the organic ginger in China is grown in Guangxi Province. “