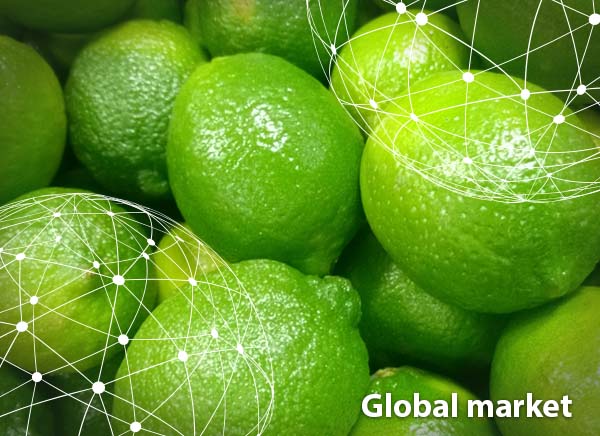 Summertime on the northern hemisphere means summery drinks like mojitos and gin and tonic, but what do these two drinks also have in common? Limes of course! The exotic citrus is currently in high demand in Europe, but strict phytosanitary measures in the key origin country Brazil means the supply is lower than usual. This isn’t necessarily bad news however; lower supplies and high demand means attractive prices, and this is set to continue for some time. In North America the market is more balanced, while Colombia sees huge leaps in the sales of a special lime variety: the Tahitian lime.

Netherlands: Almost no limes stocks in Europe
“The market for limes has been excellent in the last few weeks! There are virtually no stocks in Europe and the weekly arrivals are sold immediately”, says a Dutch importer. “Due to the strict phytosanitary measures in Brazil, it is expected that the volumes will only decrease in the coming weeks, which will benefit the sales prices.”

Germany: Brazil is gaining ground year by year
The Mexican lime season is slowly getting underway. Until a few years ago, the first shipments arrived at the end of May, but nowadays Mexico starts exporting to Europe much later. “Mexico focuses first and foremost on the US, as the European market is very risky and volatile. Brazil, on the other hand, is gaining noticeable ground in Europe, not least because with the weak local market there is no attractive alternative.”

Currently, there is a ‘pleasant market dynamic’, with supply somewhat lower than demand, resulting in attractive prices. Over the long term, limes have become part of the standard retail range in Germany. In addition, there are still high volumes going to the hotel and catering industry.

France: Stable market for limes, Brazil main supplier
The lime market in France has been stable for several weeks. The prices are above the 11 euros per box oscillating between 12 and 15 euros. In general, it has been a few years since the exotic fruit was popularized in France, in particular thanks to the mojito, a cocktail widely consumed in summer. Despite high prices, the demand is good on the French market.

In terms of origin, Brazil is currently the main growing region on the market in France, with rather good quality products.

Italy: Lower supply expected due to Brazilian phytosanitary concerns
For limes, summer is the best season in Italy. The proof of this comes from a wholesaler who supplies tourist activities. “Consumption is high. Thanks to the high temperatures, many drinks are prepared on the beach and in bars. But, at the same time, sales in supermarkets and traditional shops have also increased. Wholesale prices in recent days have been between 2.50 and 3.50 EUR/kg. Currently, around 120 containers of limes are expected to arrive in Europe (mostly through the port of Rotterdam). The primary origin is Brazil. However, there is some concern that there will be a shortage of product in three weeks’ time. In fact, there have been stops in Brazil due to phytosanitary controls, so there will be fewer containers of product.”

According to another Italian wholesaler, after week 22 of 2022, there was no rush to buy limes, a product available for 12 months of the year. “After a period of more limited volumes, there is now no shortage of goods, but sales are slower. However, the prices of Brazilian and Mexican limes remain very high, also due to the increasing costs. Limes from Colombia are also present on the Italian markets, but in a more limited way. Prices are in the range of 12.50  euro per 4.5 kg crate in the case of the Brazilian product. The Mexican lime, in a 4 kg crate, reaches even higher levels. Three or four weeks ago, sales quotations were close to 16 euro. Now, depending on quality and origin, the range goes from 2.20 to 2.80-3.00 EUR/kg. For the past six weeks or so, we have been experiencing what I call a roller coaster phenomenon.”

The product arrives by sea to ports in Spain and the Netherlands. “For this year’s lime season there is one more factor to consider,” says the wholesaler. “In recent months, in both Spanish and Dutch ports, many containers of product have been destroyed – in greater quantities than in previous years – due to citrus bacterial cancer, which seriously affected citrus groves in Brazil. This meant that there was less product available on the market, and sales were always suffering. To add to this scenario, there were also ship delays. So, suddenly, lime prices shot up: from 7-8 to 16-17 EUR. Then gradually, there was a decline, down to the current quotations.”

The Mexican lime did not have the same problems in the first months of the year. “It was always more expensive than the Brazilian one and volumes were never abundant, as trade routes to the United States and Asia, markets that are much more profitable than Europe, were preferred,” the wholesaler points out.

Spain: Lime canker causes volatile market
The situation of limes for a few weeks is marked by a high demand in the European market in general, and in the Spanish market in particular. However, there is great instability, uncertainty and irregularity in the arrivals of limes to European ports, not only due to climatic conditions, serious logistical problems, strong cost increases derived from continuous increases in freight rates, transport at destination, dollar/euro parity…, but also due to a new factor that is causing a significant reduction in outgoing volumes from Brazil: canker. Canker is a disease recently detected in lime, and it is causing the destruction of fruit in European ports and in recent days, in the ports of Brazil as well, where strong sanitary controls and restrictions are being implemented for the export of fruit.  As a direct consequence, lime costs have skyrocketed at origin and in the coming weeks will really show to what extent the market and prices are affected.

North America: Stable season for limes in supply, quality, and demand
Supplies of limes are steady and ample enough to meet the demand. “There’s enough supply to where it’s not doing any detriment to a price point or to the market and it’s pretty much the same volume as previous years,” says one shipper.

Currently, the shipper is pulling limes from four locations in Mexico: Veracruz, Puebla, Jalisco and Michoacán, all of which it sources limes from at various points year-round.

As for quality and sizing, he says shippers can find pretty much almost anything out there. “To generate a premium product you have to put the effort in terms of repacking,” he says. “The quality that’s originally being put in the box is great and then once it arrives in the U.S., we still do a run on that fruit to get the quality fruit that generates the highest dollar in the market.” He adds that the product off the tree is good with consistent sizing and color.

Meanwhile demand for limes is also steady. “It seems like everyone wants the larger size on demand. Oftentimes if you have someone who wants to take your 175s and 150s, you have to use that to help move your 230s and 250s. It all balances itself out,” he says.

As for pricing, the shipper says it’s where it needs to be. “You don’t want it to be at a $30 premium. If you can maintain that lesser than $20 price, it’s the safest route to go,” he says, nothing that the higher lime markets such as a $60 market comes with the expectation of a high-quality lime. “If it’s not a perfect lime, that’s a risk,” he says. This pricing has also come down from just a few months ago where prices spiked in the marketplace. “Pricing did what we all hoped it would do and that is get back to a settling point which is where we’re at right now.”

Looking ahead, the shipper hopes for more of the same movement until just before school starts back up again, which tends to change consumer buying habits again. “So rather than buying in bulk or more sporadic buying in the summer, the restaurants will slow a bit and more retail will be driven again.”

South America: A decade of growth in Tahiti lime exports in Colombia
The production and export of fresh fruit in Colombia has grown considerably in recent years, highlighting among them what is the most important citrus fruit for the country and which has established itself as the third most exported Colombian fresh fruit, only behind the banana and the Hass avocado: the acid lime or Tahiti lime.

According to figures, in the first quarter of this year, international sales of Tahiti limes registered a year-on-year increase of 90%, totalling 35 million dollars.

This increase in exports is due to a reactivation of the catering sector and tourism at the international level after the most acute phase of the pandemic has been overcome, as well as “the climatic problems that Mexican producers have faced, which have significantly affected world supply of Tahiti lime, mainly in the United States and Canada, where price increases have been registered, especially in the high-quality and organic segments”, an industry body explained, detailing that sales to the United States increased by a remarkable 260% between January and April.

The international markets for this fruit have also multiplied in this period; while in 2011 the Tahiti lime from Colombia was sent to 7 destinations for amounts equal to or greater than 10,000 dollars, today they amount rise to 22.

The organic acid lime market, for its part, also projects an interesting growth margin. “While the importation of conventional Tahiti limes in Europe amounts to around 200-250 containers per week, that of organic limes can be around 15,” explains a Tahiti lime exporter. “In addition, we have shown in our fields that organic agriculture is less polluting and can become more productive and with lower production costs compared to conventional agriculture. And all this, in combination with increasingly aware consumers.”

“I always say whether lime consumption grows or not, it is our job to create a better lime than the one made by other countries or other conventional suppliers, and I am convinced that if we offer a good product at a fair price to the consumer with so much added value, we will not have growth limits, at least in the following years”, he affirms.

The climatology for now is the one factor that is sowing the most uncertainty in the forecasts of the sector since, “either due to the El Niño phenomenon or really due to climate change, in the last two years we have had much more rain that has created many problems in production by affecting flowering, and we see a drastic change in productivity in some areas and in the rhythm of harvests in Colombia in general.”