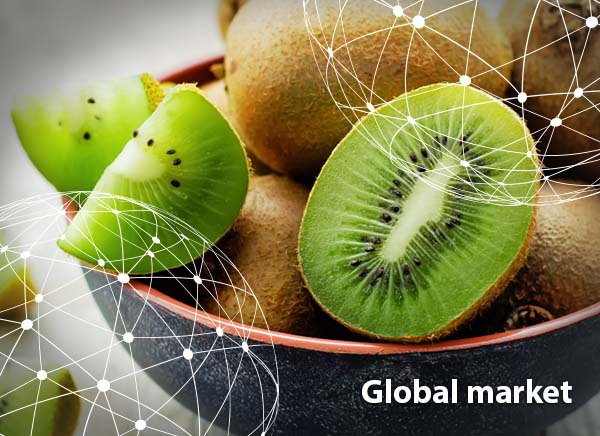 It’s all go in the world of kiwis, as the European season makes way for the New Zealand season, with Zespri at the forefront. The demand for kiwis on many market continues to grow, including in France, where a new French kiwi grower organisation has been set up to benefit from this continued increase in consumption. South Africa also aims to significantly increase it’s domestic production. Although somewhat improved, logistical issues remain an issue for this fruit, which relies on import to many market, causing a back up of European production on both the North and South American markets.

Netherlands: Zespri kiwi season starts
This period always guarantees the start of the kiwi season. At the end of April, the first charter boat with Zespri SunGold kiwis arrived in Zeebrugge. “There is a continuing demand for Zespri kiwis on our European market,” Zespri announced. The kiwi giant expects a supply of more than 64 million Zespri kiwi shells (SunGold and Green) on the European market this year.

France: New French kiwi grower organisation aims to increase production
The French kiwifruit campaign is coming to an end. The last volumes should be sold by the end of May, while the New Zealand origin is gradually taking place on the shelves of supermarkets and wholesalers. The end of the season is later than last year despite a slightly lower production due to the aging of the orchards, more than 15,000 tonnes over the last 5 years. This is an issue, as the consumption of kiwis in France is rising, and the reduction in domestic production means it is the importers that are profiting from this, rather than local producers. The French are more and more sensitive to a segmented offer of kiwis (organic, Label Rouge etc.), guaranteeing quality, a production that has been well valued this year.

The recent creation of the AOPn Kiwi de France, an organisation of French kiwi growers, has among its objectives to support the French kiwifruit production and to help the renewal of orchards in order to meet a French demand that is currently higher than the supply.

South Africa: South African kiwi production on the rise
South Africa is not self-sufficient in kiwis – yet: there is big interest in kiwi fruit (green, yellow and red-fleshed) and considerable expansion to not only supply the domestic market, but also for exports because there is an excellent export window to the Northern Hemisphere for South African growers before the New Zealand season starts.

In three or four years, it is expected that local kiwi volumes will be much higher than today.

The domestic season of Hayward (green) kiwi volumes started in February but volumes on the municipal have been very low, a trader says. The price for a 10kg carton of Hayward kiwis is approximately R500 (30 euros) at the Johannesburg municipal market. Prepacked kiwis are selling faster than loose kiwis.

Currently, though, kiwis are imported year-round from New Zealand (starting round about now) for 6 months, and Italy & Greece for the other six months. Imported kiwis for other destinations in Africa, like Kenya, are flown out from South Africa. Demand for imported green and gold kiwis from the retail sector is good, and it helps that the hospitality sector is slowly rebounding after Covid.

Domestic consumers aren’t very familiar with gold kiwis yet (they are sold in very small quantities at the municipal markets) but there is strong growth in gold kiwi retail sales every year.

China: Lockdowns affect imports, but high hopes for domestic kiwi season
At the moment, there is no domestic kiwifruit on the Chinese market. Kiwi season will start in October, kiwi berries will be on the market from July. Sichuan, Shaanxi and Yunnan are key regions for kiwifruit production. This season, few plants have been cut because growers believe in a profitable market for the 2022-2023 season. So far, quality of the kiwifruit seems to be good. Kiwi berry is a fast growing product category in China. Market prices are high, but there is limited supply so it’s market availability is short.

China is the largest trade partner for New Zealand agricultural exports and an important market for its Zespri kiwifruit. The Zespri brand is the largest brand in China, with 80% market share, and very much liked by Chinese consumers. The first shipment of kiwifruit from New Zealand arrived in Zheijiang on April 10.

Chilean kiwifruit is also in season. However, currently, Shanghai is in lockdown and its fruit import markets are closed or temporarily closed. A consequence is that Chilean fruits have difficulties being sold in and near Shanghai.

“There’s still mostly Italian fruit available still because there were a lot of logistics problems getting the product into the U.S. So, it’s in clean up mode there,” says one California-based importer.

At the same time, there is also some California kiwi volume as well and New Zealand kiwis will also start this month.

The fact that there’s still European fruit in the market has in turn slowed down Chile’s kiwi start, although it has been shipping fruit for about a month. “But it’s been more limited volumes to start and a lot of that is driven by importers saying–hey, don’t send it right now because there’s clean up from the Northern hemisphere,” says the shipper.

Overall, he notes that the Chilean crop size is similar to slightly greater than last year’s crop. “It seems like the sizing is a bit smaller compared to other years and when you have smaller sizes, you generally have less tonnage, though that’s still to be determined,” he says.

Demand and pricing have both been stable. “It’s not a huge promotion item. And for the European and the Chilean fruit, costs are higher due to many inflationary things. But if the market starts backing up and really falling behind, it’s not going to matter what the costs are at some point,” says the importer, adding that pricing is slightly up over last year. “Pricing is similar to slightly higher but under different circumstances than last year at this time. We didn’t have this much leftover fruit from the Northern hemisphere when the Southern hemisphere fruit got going.”

That said, he does note that while logistics are better than they were three to four months ago, they are still more difficult compared to other seasons. “That’s contributing to the back up of European fruit lingering in markets around the world. It’s caused Chile to have a slower start on exports because demand is curtailed because of that,” he adds.

Looking ahead, the transition away from European fruit will continue and demand in the U.S. is anticipated to wane somewhat. “Kiwis move a bit better while school is in session and summer break is coming up pretty quick,” he says. “Demand slows down from mid to late May and through most of the summer. So we see regular business maintaining but we don’t see an uptake in demand.”

South America: High European stocks delay start of the kiwi campaign from the southern hemisphere in Europe
Chile expects to market between 150,000 and 155,000 tons of kiwis in this new campaign; however, the start of the season has been slower than expected, since it has coincided with significant stocks of fruit in the markets in the northern hemisphere.

In fact, up to week 16, the volumes shipped by Chile to the different international markets represented only 62% of those shipped up to the same week of 2021.

“Zespri has been exerting more and more pressure on the markets to place and market its supply of yellow kiwifruit, delaying the sale of its green kiwifruit, which has meant that Europe has had to delay the start of its campaign until mid-December, when normally they should start in November”, explains an industry representative. “Starting later means having less time for marketing in the campaign, which is why Europe is trying to increase overseas shipments to try to balance supply in order to obtain a better return for its producers.”

The contraction in shipments has been driven precisely by the delay in shipments to Europe and the presence of European fruit in the destination markets for Chilean kiwis. According to data up to week 16, North America has been the main destination for Chilean fruit, receiving 35.2% of exported volumes and registering the smallest drop in shipments, only -6%. Latin America is the second most important destination receiving 25.3% of the Chilean kiwis exported (-26%), followed by Europe with 19.3% (and a notable drop of 64%), the Far East with a 14% share (-43%), the Middle East with 5.2% (and leading the only positive year-on-year variation, with +12%) and Russia, where shipments have fallen by 93% to represent a symbolic 0.6 % of the total.

“However, this slower start to the harvest has allowed the Chilean industry to have fruit with better physiological parameters, although with smaller sizes than we would like due to climatic factors.”

Oceania: Positive outlook for kiwi season, despite tough start
Zespri admitted in this week’s industry update that it has been a challenging start, but it is now making real progress. On the shipping front, there are over 45 million trays on the water or in the market, with all the key charter markets now receiving regular deliveries, and the fruit arriving to meet the strong demand. Zespri expects to undertake four charter sailings to North Europe, 12 to the Mediterranean, six to the US West Coast and 50 to Zespri’s Asian markets, and to send around 20,000 containers of kiwifruit this season.

The first of the season’s SunGold left Tauranga bound for Zeebrugge, Belgium and arrived in late April, with two more arriving in the following 10 days to build a healthy stock level, with the first of the green variety expected in May. The latest estimates show a supply of more than 63 million trays of Zespri Kiwifruit (SunGold and Green) in 2022 across the European markets.

Japan, Korea and Taiwan have all had really positive starts and are receiving regular shipments and the first Europe vessel. On April 10, the cargo ship STAR SPIRIT loaded with the new season Zespri kiwifruit departed from Tauranga Port and docked at Damaiyu Port, Taizhou, Zhejiang.

The first charter vessel to the US in a number of years is also due to arrive in Los Angeles next week and will be followed by five more this season. The company also continues to monitor the situation in China closely, as COVID-19 lockdowns continue, meaning fruit continues to be unloaded smoothly, albeit at a slower pace. From a supply chain side, Zespri has secured additional shipping capacity to keep the fruit moving and avoid congested cool stores. The China team are positive about making up the effects of the delays during the season to meet sales targets.

Zespri look to export more than 115 million trays of SunGold Kiwifruit and around 70 million trays of Green in 2022, and this season also marks the first commercial volumes of Zespri RubyRed Kiwifruit which will be available to consumers in New Zealand, Singapore, Japan and China.

The first 4,100 tonnes (1.15 million trays) of this season’s Zespri SunGold Kiwifruit have left Port of Tauranga, bound for Kobe and Tokyo in Japan.

The 2022 season has the potential to be another record-breaking year with more kiwifruit produced than ever before. A forecast of at least 190 million trays will need to be harvested, overtaking last year’s record of over 177 million trays.

Zespri’s new RubyRed variety is picked first which is then followed by the Gold and Green varieties. The harvest traditionally peaks in mid-April and runs through until June.