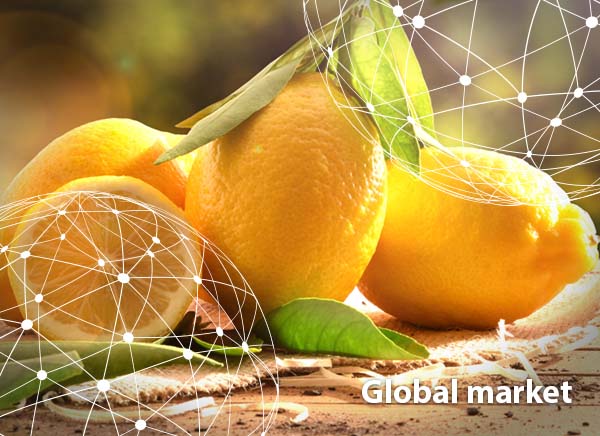 With the return of warmer weather to the Northern Hemisphere, the lemon market shows a varied picture across the global markets. The ever present risk of Citrus Black Spot continues to cast a shadow over the trade of this popular citrus, and some production regions such as Italy, Spain and Turkey have been affected by cold weather during the growing season, resulting in a lower yield. The Russian invasion of Ukraine also continues to cause issues in markets, particularly South Africa, who feels the loss of the Russian market perhaps most severely. Despite this, the outlook is generally positive, as the lower productions have pushed up prices for many markets, and as the world recovers from COVID-19, so does the catering industry, and with it; demand for lemons.

The Netherlands: Citrus Black Spot to cause another tense lemon import season
At the moment, one Dutch trader still has Spanish lemons available. “But our most important season is that of the Argentine Eureka lemon,” he says. “Next week or within two weeks the first containers will be loaded in Argentina. We expect them here in the Netherlands the third or fourth week of May.”

In Spain, there are far fewer Verna’s this year, the typical second season lemon that replaces the Fino or Primofiori there. “There is less than half as many as last year. That creates a lot of room for overseas product. The Verna’s will probably run out by mid/late June, while they are normally on the market until early August. The lower harvest is a confluence of circumstances, including an off-year and the abundant rainfall in spring, which has an effect on both volumes and quality.”

He believes the Argentinian supply will more than make up for this. “There are actually too many. Some go to the processing industry, some to the export market. So, there should be pressure on prices here.” Argentina, however, has to contend with hugely high inflation of around 50-60% on an annual basis and currency depreciation. At first glance, this may seem beneficial for exports, but Argentines cannot freely dispose of dollars or euros. Foreign currency obtained through foreign trade must be exchanged for pesos through official channels.

The Citrus Black Spot issue promises to be prevalent again this year. Lemon does not fall under cold treatment, but very strict controls are in place. “Following the suspension of Argentine citrus exports to Europe due to CBS interceptions two seasons ago, trade resumed last year. In the end, it went quite well last year,” according to the trader.

He hopes that the arrivals this coming season will not be too delayed and that the presumably large volumes will all find a customer at a reasonable price. “Actually, something unexpected always happens. Last week, for example, there were problems at the port of Durban, so the supply of South African lemons will come to a halt for a while. It will be another exciting year in the overseas season.”

Germany: Generally positive season for lemons in Germany
The organoleptic properties of the predominant Spanish Primofiori and the complementary Turkish Enterdonato were mostly convincing, according to reports from the German market. Supply and demand were often in balance, so that there were no significant changes in the valuations. Here and there, quotations rose slightly as a result of a slightly limited supply. Italian goods, which rounded off the market, became slightly more expensive in Cologne.

Italy: Positive outlook for lemons despite reduction in production
In Sicily, the harvest of the yellow Primofiore lemon is in full swing and it is sold in the main supermarket chains both in Italy and abroad. “We export mainly to Germany, but also to the rest of Europe. Later, the demand of the processing industries will also be met,” reports a trader.

This year about 50% less lemons are being produced in Campania. Consumption is good, and restaurants and retailers are buying up the product. At the moment, sales prices are between 0.80 and 1.70 Euro per kilo, while organic lemons do not sell for less than 1 Euro per kilo. With better weather conditions and the approach of summer, consumption is expected to increase, the market will become more lively and prices are going to rise.

According to data, in the last 12 months ending February 2022, 70.9% of families, or more than 18 million, bought lemons at least once for household consumption. The frequency of purchase is also high, averaging 8.2 times per household per year, while the average expenditure per act of purchase is less than €2. The average quantity purchased per act per household is 800 grams of product.

Spain: Good prices due to lower production
The Spanish Primofiori lemon campaign has ended with good prices due to a lower production this year, worsened by the persistent rains in March and April. There has been more competition with Turkey since the war with Russia and Ukraine started, as shipments were diverted to the EU. The Verna lemon season, which is starting now, will have reduction of around 45% of its harvest compared to that of 2021. Forecasts point to a harvest close to 190,000 tons for 2022. This is due to the bad weather conditions last year, with cold, wind and excessive rains which affected flowering and fruit set in some production areas. Furthermore, the unusually abundant and steady rains since March have influenced in the sizes of Verna lemons, which are enormous this year.  The excess of water has brought an abundance of sizes 1,2 and 3, while the market mainly demands sizes 3,4 and 5. Sizes for medium and small sizes are high at the moment although the market seems reluctant to pay. It will be difficult to sell such big lemons this year, especially when South African and Argentinian lemons will likely reach consistent volume levels on the markets in the coming 2-4 weeks. So far, the average price for Verna lemons ranges from 55 to 65 cents per kilo on the field.

Turkey: Lower production due to weather conditions
Over the course of the past season, lemons cultivated in Turkey have had to deal with bad weather hitting right around the time the produce was to be harvested. If growers had been able to anticipate this weather, the harvesting would have been done on time. Unfortunately, this was not the case. Demand was rather strong overall, and there was no drop in demand after Christmas, which is usually the case. After the start of the Russian invasion of Ukraine in February, trade to both these countries has slowed significantly.

South Africa: Loss of Russian market means return to price pressure in the Middle East
The average lemon price in South Africa has decreased to R4,15 per kg (0.25 euro), with a slightly higher price for class 1 lemons. A lemon trader on the municipal market says that seedless lemons are faring better than seeded lemons, and that there are a lot of lemons available currently on the local market, but that they are also seeing a fair amount of wind damage to lemons.

Rain in parts of Limpopo has impeded lemon harvesting recently, as has the violent strike ongoing in the eastern Cape’s Sundays River Valley where lemons are currently meant to be packed.

The loss of Russia as an export destination affects lemon exports, with the Middle East taking the strain from large amounts of exports, putting the price under pressure (an almost annual occurrence on that market) before South African exporters start sending to Europe.

The lemon crop estimate for this season is 32.3 million 15kg cartons, an increase of 1.3 million cartons compared to 2021.

Young trees beginning to bear fruit in some regions including the Western Cape and Senwes in Limpopo will contribute to this growth. The Citrus Growers’ Association has noted that a cooler summer could result in smaller fruit in some regions, which could impact the final number of cartons packed and shipped.

North America: Solid demand for lemons as North American restaurants continue to reopen
Supplies of lemons are moderate at this time. One California-based shipper says the majority of supplies are currently going towards committed programs, which is typical of the winter season. “As domestic supplies wind down, we approach our main crop with heavy volumes beginning in June/July. We’re expecting strong volume and excellent quality again for this summer season,” he says. Its production for the summer season comes largely from Tamaulipas, Mexico with some fruit from the northern Veracruz and Sonora regions as well.

This looks different compared to last year at this time when the overall supplies of lemons from Mexico was affected by the freeze in February 2021 that affected both Mexico and Texas. “Luckily, the majority of our supplies were minimally affected and we were able to fulfil our programs,” says the shipper.

Domestically, California is in the latter part of its season and into District 2 fruit. This follows what appears to have been a good season, despite the rains that came in District 1. “Several countries in South America are also getting ready to ship fruit to the U.S. with reports of decent quality and volume. The largest concern for South American supply is ocean logistics,” says the shipper, noting that lengthy delays and high shipping costs are expected to continue this season.

The shipper produces mostly Eureka variety lemons and typically the divide is approximately 40 percent Fancy and 60 percent Choice, a split expected to continue this year. “We tend to peak on smaller sizes which is beneficial when domestic and South American crops have heavy rain, as they then peak on larger fruit,” they say. “This was the case this past season for California, and is expected for the approaching supplies from Argentina.”

As for demand, it’s solid from both the retail and foodservice sides of the business. “Prices are at levels that are promotable for retail and fair to foodservice, allowing both to progress forward in spite of elevated logistical costs,” says the shipper. “Foodservice appears to be much improved after facing many challenges the past two years and we expect a continued revival in that sector.”

As restaurants continue reopening, they expect consumption to fall back in line with past levels and then, hopefully, continue to grow. “Consumption from foodservice is certainly primed for growth as many return to eating out and begin attending more public events,” he says. “On the retail front, we see continued, increased consumption of organic lemons.”

Meanwhile on pricing, as domestic supplies wind down in California’s final district, prices are beginning to come up. “Additionally, ocean freight rate increases from South America are forcing an elevation in pricing for upcoming arrivals,” says the shipper. “Overall, we expect to see better pricing and more stability from Mexican supplies, taking into account the logistical advantages of the easier and closer entry to the U.S.”

Looking ahead, slightly elevated pricing is anticipated for May. “It’s likely that prices will level off starting in June as Mexico, along with South America, will be well into their seasons,” the trader says.