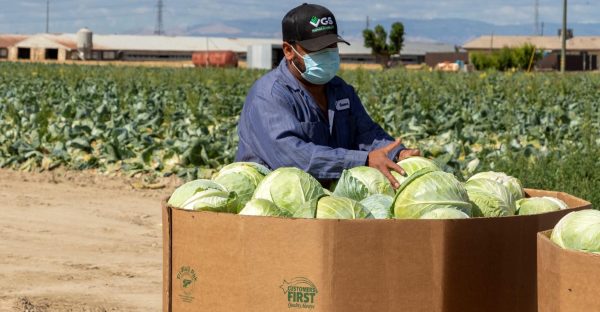 Producers say they could use help with faster test results, isolation of ill workers.

Farm operations are trudging through their late-summer harvests with the added burden of making sure workers are wearing masks, maintaining physical distance and taking other precautions against the spread of the coronavirus.

Growers told a California panel Tuesday they could use local and state officials’ help in obtaining faster test results, contact tracing and isolating workers who are ill, noting that many farmworkers are housed with their families or other workers and pile into van pools to get to the fields.

“What is worrisome is if there is a spike in infections as harvest is approaching, that’s going to reduce the labor,” said Amelia Ceja, president of Ceja Vineyards in Napa. “Everyone’s being super, super careful … but I fear if infections spike, some grapes might be left on the vine.”

Ceja and others gave a report to the state Board of Food and Agriculture after a summer spike in COVID-19 cases in the San Joaquin Valley drew the attention of state occupational safety regulators. California Attorney General Xavier Becerra began contacting agricultural operations, asking detailed questions about their preparedness protocols.

In response to the uptick in cases, including some at agricultural processors, the state Department of Food and Agriculture began a program using Federal Emergency Management Agency money to pay 75 percent of the cost of hotel rooms to quarantine infected workers, CDFA Secretary Karen Ross said.

The state is working with local officials and charitable organizations to establish a hotline to get information to workers and recruit volunteers to bring meals to isolated workers, she said.

While the program began in the Central Valley, “our goal is to have this so any county can opt in if they choose to do so,” Ross told the board during the online meeting. The program is offered to workers regardless of their immigration status, she said.

“This is no questions asked, for anyone who is positive and has been exposed … and cannot isolate in their current housing situation,” Ross said.

Farmworker health is at the forefront of attention as outbreaks have occurred at numerous agricultural facilities across the country. In California, harvests are underway for myriad summer fruit and vegetable crops, including peaches, plums, nectarines, apricots, late navel and Valencia oranges, tomatoes, cucumbers and zucchini.

Alexandra Allen, co-owner of Freshway Farms and Main Street Produce in Santa Maria, said she feels a “huge moral obligation” to care for her 800 peak-season employees. She said COVID-19 has the potential to quickly worsen a labor shortage that has already existed for several years.

“We worry a lot about not having enough labor,” she said. “For us there was never a time that we did not take COVID-19 very, very seriously.”

A “critical piece” has been to try to get buy-in from employees, as wearing masks in the heat of the outdoors can be unpleasant, she said.

“I have to say I’m really impressed” with workers’ willingness to wear face coverings, Allen said. “There was some push-back early on but that’s over.”

At Rominger Brothers Farms in Winters, when a foreman’s wife tested positive while working at another facility, laborers who had been resistant to masks began to take the virus more seriously, fifth-generation farmer Bruce Rominger said.

The farm, which grows processing tomatoes and various other crops, has had to send several people home who weren’t feeling well, including one woman who showed up to work with a 102-degree fever, Rominger said. It has had two tests come back positive for COVID-19, and one of those workers has been out for 2 months, he said.

“Right now we’re in the middle of harvest, and my biggest worry is, are the canneries going to keep operating?” he said. “Tomatoes are a very perishable crop.”

On Fresno County’s west side, about 300 workers are harvesting organic melons for Del Bosque Farms. When COVID-19 arrived, the operation stepped up measures that were already in place for food safety, including hand-washing and sanitizing equipment, owner Joe Del Bosque said.

“We continue to learn about COVID and how to protect ourselves,” he said. “In food safety, the object is to protect the consumer. Now we’re trying to protect our workers from our workers, so it took on a little different perspective. We took on the same practices as everyone else – the face coverings, social distancing, taking temperatures in the morning.

“All of this is very important, but the key to all of this is education,” Del Bosque said. “That’s one thing we pride ourselves in is educating our people. We do a lot of training here on all sorts of issues. This is something we added to our food safety repertoire.”