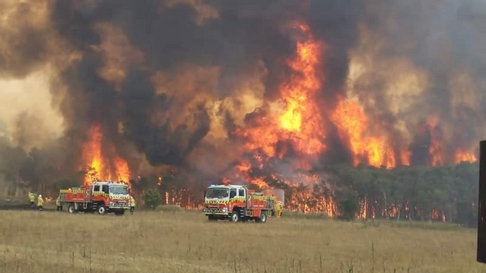 Growers Preparing for Worsening of Bushfire Conditions Over the Weekend

Growers and farmers in Southern Australia are on high alert, with fire conditions predicted to worsen this weekend.

For the third time this year a State of Emergency has been declared in New South Wales. It comes a day after Victorian Premier Daniel Andrews declared a State of Disaster for six Local Government Areas and the Alpine Resorts in the state, for the first time ever.

With a number of large and dangerous fires still burning that pose a serious threat to life, temperatures are forecast to rise above the mid-40 degree mark (Celsius) on Saturday across large parts of in-land parts of NSW, and reach low 40s in Victoria.

“Declaring this State of Emergency is vital to the safety of communities in NSW as we face the most devastating bushfire season in living memory,” NSW Premier Gladys Berejiklian said.

Several areas have already been issued with leave notices, including Batlow, where apples and several other fresh produce items are grown. Earlier in the week, fire went close to salad and vegetable growing towns in Victoria’s East Gippsland region.

So far, it is not clear if any substantial damage has been sustained to fruit and vegetable properties specifically, however the National Farmers’ Federation says many farmers in general had already been impacted by bushfire losing homes, livestock and infrastructure.

“The current bushfire situation is unprecedented and our thoughts are with rural Australians during what will be a very dangerous period,” National Farmers’ Federation President Fiona Simson said. “The most impacted sectors include the dairy sector where large parts of the NSW south coast, and north eastern Victoria were impacted and continue to be under threat. There are also reported losses in the beef and sheep sectors in upper Murray region of Victoria, lower Riverina and Snowy Mountains areas.”

Ms Simson added that Australia has just recorded its hottest, driest year on record, and politics need to be put aside to manage through what are unprecedented conditions confronting our people and our landscape, because farmers required immediate assistance from governments of all levels.

“Already we have seen the devastation caused by the current severe drought and now we have catastrophic bushfires to deal with, so farmers and rural and regional communities simply must have all of the assistance they need,” she said. “I have been liaising with federal and state parliamentarians and working closely with the NFF’s impacted state members, the Victorian Farmers’ Federation and NSW Farmers, to determine the most pressing needs of affected farmers and how these needs can be met. I’m pleased to see the Commonwealth and states working hand in hand in this crisis to deliver much needed aid and this must continue to ensure we get through this dreadful series of events.”

People in the fire affected areas are urged to monitor the fire and weather situation through www.rfs.nsw.gov.au in New South Wales, and www.emergency.vic.gov.au in Victoria – and call 000 (Triple Zero) in an emergency.