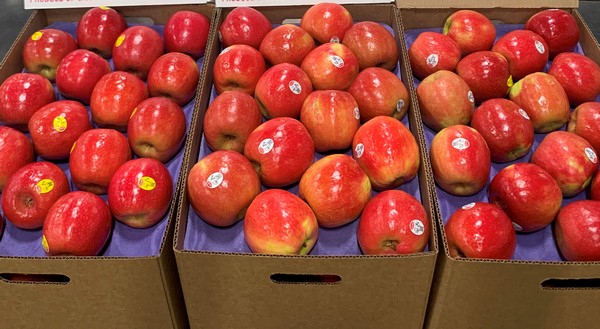 Supplies of Washington apples are good, though beginning to tighten up slightly in some varieties and sizes.

“The 64ct have been a tough spot. Most of my customers have switched to a 72ct and that has made it easier,” says Jason Fonville of Ag Grower Sales, LLC. in Wenatchee, Wa. “The smalls on the other hand–so the 113s and the 138s–have been plentiful this year as opposed to the last two seasons. I have customers who take the smaller sizes so it’s a good year for us.”

Fonville also adds that supplies of Royal Galas are also slightly tighter with them coming out of controlled atmosphere storage ready for export. Consequently, prices have gone up on Galas. “But Red Delicious, Fujis and Granny Smiths were really tight this time last year and there are more available this year,” adds Fonville.

Delayed harvest
While Washington apples are all harvested, Fonville notes it was a late finish to the season. “Everything seemed delayed and then we had some cold come on when the growers were getting the Pink Ladys and the last of the Granny Smiths off the trees,” he says.

As for demand, after a somewhat slow start to the season, demand is now steady for apples. “I plan on being busy all the way into the new year,” says Fonville. “Demand has been good for all varieties of apples. I do see demand for the Red Delicious going down, though, as the club apples start to become more popular. It didn’t look so great for the club varieties three to four years ago but now they are starting to change the market a little bit and customer demand is up.”

That said, pricing is somewhat low currently. “This isn’t typical,” says Fonville. “The volume and size that I personally sell for example —113s, some 64s and 72s, mostly the smaller sizes — in the smaller profile category there are plenty of apples to fill demand. Lots of bagged apple deals out there,” says Fonville. “But I think the pricing on the retail side for the higher grade are good this year. They were off a little bit from last year’s pricing but they’re not bad.”