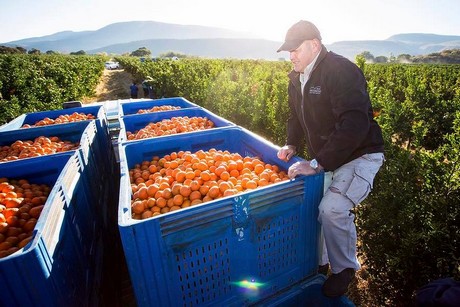 The first major volumes of South African citrus are due to arrive on the US East Coast in the first week of July. Canada has already been receiving the full range of South African citrus – including Navel oranges, easy peelers, grapefruit and lemons – since mid-May, while the US has only received limited volumes of mostly clementines and also a small number of Navels since early June.

“The first significant South African citrus arrival for the USA will come in the first days of July when the first bulk vessel of USA-bound South African citrus arrives at Gloucester, NJ,” said Mark Greenberg, CEO Capespan North America. “That vessel will be carrying 700 pallets of easy peelers and 2,600 pallets of navel oranges. South Africa has also begun loading Star Ruby grapefruit from the Northern Cape for the US market with the first significant volume expected to arrive by container this week (the week of June 24).”

Greenberg said that in addition to receiving fruit earlier than the US, Canada is also able to import citrus from all South African growing regions. “The Canadian market is able to source citrus from all growing regions of South Africa as opposed to the US which can only source from the Western Cape and Northern Cape. This affords the Canadian market a price-competitive head-start over the Americans in offering South African citrus to retailers.”

“Last season presented a very challenging Southern Hemisphere citrus market in the USA on almost all products, but especially on Navel oranges and late season mandarins,” he explained. “One impact that this will have will be a reduction in South African navel orange volumes to the USA.”

However, the market is not expected to be short, as there will be plenty of volume from South America. “While this may suggest there will be a shortfall in Navel oranges in the US this summer, that is unlikely to be the case,” Greenberg noted. “Chile exports around 100,000 metric tons of Navel oranges worldwide of which it ships around 95 percent to the USA. Even though the Chilean Navel crop is said to be down from last season, there will be sufficient Navels to supply the market.”

Late mandarin volume continues to grow
Observers have noted that both South Africa and Chile are planting more late season mandarins. As Greenberg said, Peru and Chile are strong players in the market, with the latter having sent 100,000 metric tons to the United States last year. With more predicted to arrive from South Africa in the coming years, marketers will be kept busy as they seek out sustained strong prices.

“The result of this is going to be the need to spread these increased volumes over more markets,” he said. “While South African easy peelers (both summer clementines and late mandarins) have been a fixture in the US market for many years, this market is likely going to be called upon to handle more of this excellent and high value fruit. As South Africa adds its volume to the North American market, along with the production from Chile’s new plantings, there is going to have to be a re-calibration of expectations and a reallocation of export destinations among shippers from all origins.”

“Summer citrus has become a standard offering at all US retailers,” Greenberg concluded. “Most retailers will feature at least two SKU’s of sweet summer citrus: easy peelers and oranges. Others will enhance their offerings with Cara Cara oranges and South African grapefruit and Peruvian Minneolas. But it remains that summer citrus competes for retail shelf space with domestic summer fruit. As well, serious retail interest on imported citrus only gets started when the US retail trade can no longer source satisfactory product from domestic sources which, in the case of navel oranges, can be well into July. With the lessons learned from last season, South African shippers are taking a prudent approach which will likely serve them well. So, we expect a strong and stable summer citrus season from South Africa.”