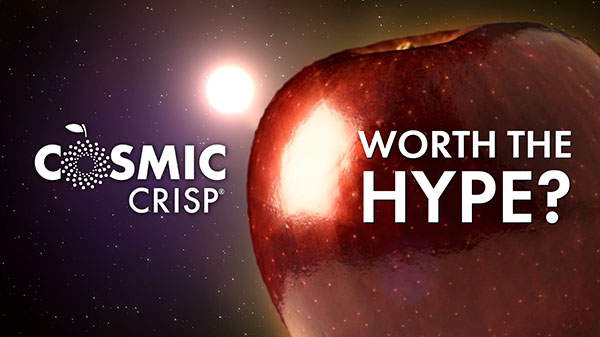 Is Cosmic Crisp worth the hype? Short answer: YES

Every time I go to my local Walmart lately, I’m buying 10 pounds of apples.

I’m not exaggerating. Why?

For some reason, the “Manager’s Special” has had Cosmic Crisp apples on sale for $1.50 a pound, down from $2.97 a pound for at least three weeks now. They’re in the reefer case and they look fantastic displayed in the Cosmic Crisp cartons. And it turns out, they’re worth every bit of hype.

Late in the summer, the Cosmic Crisp PR machine cranked it up to 11. I couldn’t read anything about apples without being inundated with Cosmic Crisp stories in every major media outlet, from the Wall Street Journal to Vox to my local TV station. I read comment wars on Facebook posts on random news outlets involving people I actually know personally.

As someone whose professional career revolves around being a certified apple snob, it got a little tiring. I kind of started to resent this launch, despite knowing the hard work and strategy behind it. I felt defensive for the apple varieties I know and love. Who is this new guy, and why are they bragging so hard?

AND THEN, Fresh Summit happened. There was Cosmic Crisp propaganda EVERYWHERE. There was a literal Cosmic Crisp HOT AIR BALLOON in front of my hotel. If the symbolism doesn’t give you a chuckle, you missed the point.

Peak Cosmic Crisp frenzy hit the week of December 1, when they were officially released to pack. Every single media outlet I consume was talking about it.

The funny thing was, it took at least a week for them to show up at the store. My apple snob husband was at H-E-B’s Central Market when the produce clerk was sampling the first shipment. He tried them. He “meh’d” them. He brought a few home, along with a fantastic Opal, and we all went…”I mean it’s good, but it’s not the best thing ever.”

But this wasn’t Cosmic Crisp’s true time to shine. We’re looking at an apple that’s supposed to deliver on amazing taste through the winter and into the spring.

So, I decided to have a little taste test. And, like I do, I went overboard. We went to Central Market and bought every single managed variety we could find, along with some tried and true favorites. We had:

I bought the majority of these apples at Central Market the morning of the party. I wanted to make it as fair as possible. There are three exceptions:

— Wild Twist was sent to me by a lucky Hess Bros. Fruit Co., which reached out to me at random the Monday before my party, asking to send apples for their new launch;

— The SweeTango we tried was in my fridge a couple of weeks because we hoard them at the end of the fall season; and

— I bought my Cosmic Crisps at Walmart because they were $1.50 a pound.

I also accidentally bought organic and conventional Opal apples, so we did a bonus head-to-head comparison. Conventional won, by the way.

My friends and family, all self-identified as huge apple fans (could also be classified as apple snobs, depending on who you ask), narrowed down the list to four favorites:

— Kanzi, a Gala/Braeburn cross; and

I held off trying Cosmic Crisp until the very end, right after a really disappointing Honeycrisp. Something happened with that Honeycrisp that made me question if there was actually something wrong with that load of apples because it was THAT terrible, kind of a mix of mold and furniture polish. I think that kind of highlights the reason people are looking to cross Honeycrisp with so many other varieties. It’s an amazing apple, but it is frustratingly inconsistent.

A few of these varieties surprised me. Evercrisp is a fantastic apple and more people need to know about it, and Kanzi, an apple that’s been around for quite a while, deserves more credit — and bigger promotions.

Everyone absolutely loved Cosmic Crisp. I could not believe how much we loved it.

And ever since, I’ve been buying them like crazy, not wanting to miss a chance at catching them this season before they’re all gone. In the initial launch year, there’s only about 400,000 boxes.

Get ‘em before they’re gone.