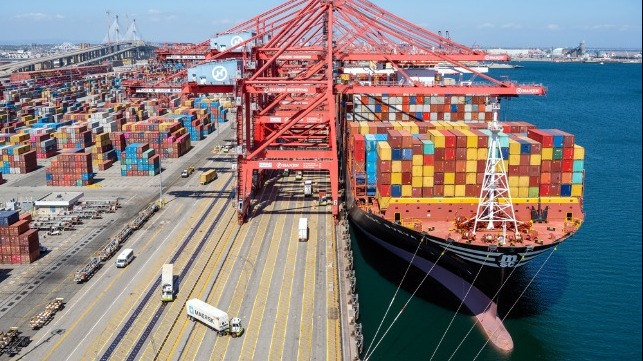 Terminals in the two largest container ports in the US are so congested that most ships are having to wait at anchor until a berth becomes free.

Southern Californian ports are suffering from near-record levels of congestion, with many ships arriving off Los Angeles or Long Beach forced to anchor for several days before being able to dock because there is nowhere to put the containers that need to be unloaded.

Most of the world’s top container lines have ships caught up in the gridlock, according to Lloyd’s List Intelligence data, with some vessels still waiting to berth after more than a week at anchor.

At the centre of the crunch are nearby distribution centres that were overflowing even before the latest import surge. That means beneficial cargo owners are having to find alternative storage space for merchandise they have ordered, including on chassis that are required by trucks to haul containers, so creating equipment shortages within the ports. Containers that would normally be stacked three high are now piled five high, adding to the problem of extricating the correct ones for forward delivery, say local sources. Adding to the gridlock are longer container dwell times on the terminals, while the delays are pushing the hours of local truck drivers up to their allowable limits.

On the ocean side, the extra waiting times that ships are encountering are likely to disrupt sailing schedules for weeks to come.

The Marine Exchange of Southern California, which is responsible for overseeing vessel movements in and around the two largest ports in the US, said that an unprecedented 42 ships were at anchor outside the adjacent San Pedro Bay ports on Boxing Day, with contingency anchorages having to be utilised as regular ones filled up. By December 28, 26 ships were at anchor, of which 24 were containerships, with two scheduled to berth later in the day and five more due to arrive.

The latest numbers are exceeding those in early 2015 when a combination of protracted negotiations on a new contact for dockworkers, and the introduction of reconfigured container line alliances, created gridlock within the two ports. Large numbers of ships had to anchor, mostly for a few days but occasionally for up to a month.

In November, 50 of the 88 ships bound for the port of Los Angeles had to anchor for an average of 2.5 days, according to executive director Gene Seroka.

By mid-December, that figure had risen to 80% of ships heading for Los Angeles, with waiting times at anchor increasing to four days.

The situation has worsened since then, however. With the number of ships calling at LA and Long Beach in recent weeks swollen by extra-loaders deployed by container lines to help move so much cargo, the Marine Exchange has had to send some ships to anchorages off Huntingdon Beach, south of the two ports, as other slots filled up.

Lloyd’s List Intelligence data shows that Maersk, Mediterranean Shipping Co, CMA CGM, Cosco, Evergreen, Hapag-Lloyd, and ONE are among lines whose ships have been held up.

Mediterranean Shipping Co has incurred several delays including the 16,500 teu MSC Venice (IMO: 9647473) which had to wait a few days before berthing just before Christmas, while the 14,300 teu MSC Aries (IMO: 9857169) is currently in the anchorage.

The scenes off the southern Californian coast are reminiscent of the situation between October 2014 and April 2015, when as many as 36 vessels were waiting to enter port at one stage, most of which were boxships, as quays remained clogged with cargo.

But the peak in terms of ship numbers was in 2002 during the infamous lock-out that occurred during angry contract negotiations between the International Longshore and Warehouse Union, and the Pacific Maritime Association. At the height, 65 ships were ordered to anchor, but the vessels were very much smaller than in 2014/15 when containerships of 10,000 teu or more had to wait for several days. Now, many of the ships are even larger.