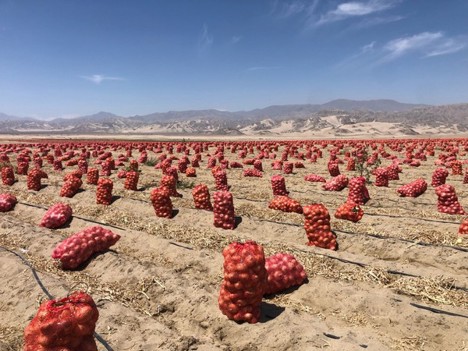 Onion supplies for 2022-2023 look to be more limited than this time last year. “We have operations in Washington and our crop is lighter this year. There were weather issues in the Washington growing and harvesting period and that’s affected yields,” says Matthew Gideon of Keystone Fruit Marketing, a division of Progressive Produce. “We expect to wrap up our Washington season by the end of January which is about a month or so earlier than normal.”

Along with Washington, the other major growing region is Idaho-Oregon and other regions are also shipping including Michigan, New York and Canada.

At the same time, Gideon notes that sweet onion supplies are also coming from Peru. “We expect from our farms to have steady supplies through the holidays and into the spring Mexican onion season,” he says. “The quality is very nice and the logistics component, which was a big challenge last year, has moved out this year. From an onion supply standpoint, we’re optimistic for a good selling period.” The Peruvian sweet onion season starts in July and goes through to February.

Demand outpacing supply
As for demand, Gideon says it’s been a year where demand has exceeded supply. “Demand for staple items like potatoes and onions has been strong,” he says. “The markets have reflected that. They are higher than average all year and with the issues in the Northwest, I would expect the same lower-than-average supply and higher-than-average demand for the rest of the year.”

The earlier end to the Washington season though won’t necessarily mean a gap in supplies. “Now that the supply report is out and there are fewer supplies, most grower-shippers will start allocating product and have less supply for the spot or open market. It won’t create a gap but it will just keep prices strong and potentially increase prices again in the spring onion season,” says Gideon.

He notes that the pricing on onions in the late summer rose to approximately $20/bag, a number that’s considered record-level. “That has settled down to $14/$15/bag right now and I expect that to remain steady to spring,” he says.