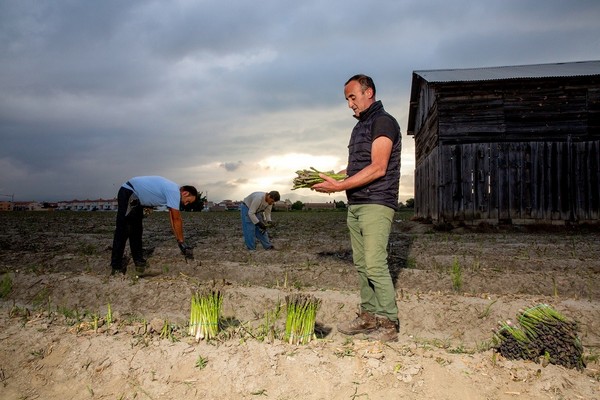 The green asparagus harvest started this week in Granada with very limited volumes in some plots. The lack of rain and the sudden drop in temperatures are slowing production in the field and there will only start to be consistent volumes by the end of March. In addition, Mexico’s production volume is very low, which means there’s not much supply available in the markets at this time.

“The drought we’ve experienced for months is delaying the harvest this year when compared to last year. The weather was good in the last two weeks, but now temperatures have dropped and there has been some rainfall. The rains don’t harm us at all, quite the contrary. However, forecasts are we’ll have ten days with average temperatures of 14 to 15 degrees, which will slow down the harvest compared to our plans for this year,” stated Francisco Delgado, manager of Los Gallombares. “As soon as temperatures rise again, production will immediately increase again. We estimate that we’ll start having consistent volumes of green asparagus in Granada from March 20-25,” he added.

At the moment, the markets depend mainly on Mexico’s production, which is nearly 30% lower this year due to adverse weather conditions. “Currently there is a lack of supply of green asparagus because Mexico is having problems with frost and sandstorms, which make the product useless. Most of their production is being sent to the United States, which pays better. Despite this, we’ve managed to have a minimum of production with which to serve customers thanks to our Mexican suppliers,” stated Francisco Delgado.

“The supply is limited and the demand high so prices are at fairly high levels. However, since Spain doesn’t have much production at the moment, only a few farmers are benefiting from the high prices,” stated the manager of this cooperative, which this year expects to produce 9 million kilos of asparagus if everything goes well.

The area dedicated to green asparagus cultivation in Granada did not grow in the last two years. However, it has increased in this campaign again. “The production in Italy, one of our biggest competitors in Europe, has stopped growing. In the last two campaigns, Spanish producers achieved good prices, which has encouraged more farmers to plant asparagus. Fortunately, the consumption of green asparagus is gradually growing and the asparagus from Granada is very appreciated for its organoleptic qualities. Many European importers prefer it over the overseas asparagus when it’s available,” stated the manager of Los Gallombares.