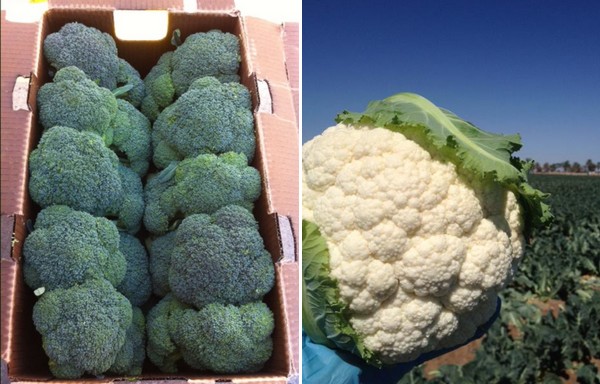 It hasn’t been an easy season for cauliflower and broccoli out of California. Currently, production is in the Central California region.

Broccoli
Supplies of broccoli are below normal right now compared to supplies in the last several weeks. “This is in response to heat spikes that have affected the quality of the California acreage,” says Mark McBride of Coastline Family Farms. “Many growers are noting discoloration of bud clusters (heads) and those crowns cannot be packed and sold.” On top of that Mexican production of broccoli crowns is also down, though that’s due to recent rainy weather. Meanwhile, East Coast growers are also currently harvesting.

McBride says broccoli demand and pricing have both been depressed since the start of the deal out of Central California. “Prices have been well below the break-even point and many growers have elected to leave unharvested acreage behind rather than pack more product that they can sell effectively at or above cost. This has been the case for several weeks,” he says.

Cauliflower
Cauliflower has also seen some reduced production thanks to those high temperatures. “Production has exceeded demand for most of the Central California production season and low prices have plagued the season,” says McBride. Like broccoli, poor demand and poor prices have led many shippers to curtail harvest and leave unharvested acres behind.

Generally, both demand for cauliflower and prices have been below expectations for the majority of the deal in this region. “Overall demand has been lackluster more days than not,” says McBride. “However, cauliflower is a very temperature-sensitive crop and we’ve experienced some reduced production. But weeks of excessive production have finally given way to a lighter volume and improved FOBs.”

Looking ahead, McBride notes that the outlook on these two commodities remains uncertain. “This is as we continue into the warmest weather of the Central Coast season. This weather typically results in variable quality, sizing and yield,” he says.