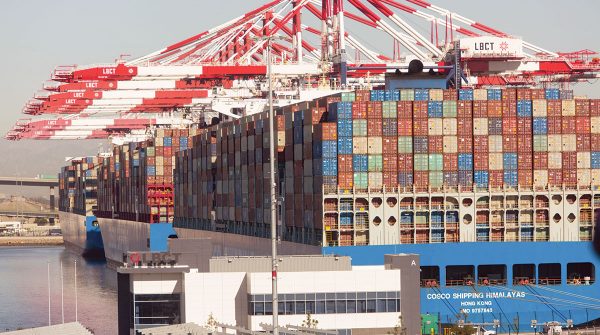 Record-setting container volumes continued flowing through some of the nation’s major ports in July, while industry challenges compelled declines at other facilities.

The Port of Los Angeles saw a 5% increase in the number of twenty-foot equivalent containers processed for the month, rising to 935,423 TEUs compared with 890,799 a year ago. Los Angeles has set monthly records in five of seven months in 2022.

“Remarkably, we continue to move record amounts of cargo while working down the backlog of ships almost 90%, a huge accomplishment by all of our partners,” Port of Los Angeles Executive Director Gene Seroka said. He noted these cargo volumes were moving despite continuing challenges with freight railroads that serve the port.

Long Beach on Aug. 17 welcomed Pasha Hawaii’s MV George III, the first containership powered by liquefied natural gas to refuel on the West Coast. The ship’s LNG engines are far cleaner than those of a traditional cargo ship. Another LNG-powered ship is set to begin West Coast operations between Hawaii and the U.S. mainland in the fourth quarter.

While Los Angeles and Long Beach set records, protests over a controversial new California law took a toll on the Port of Oakland. The central California facility saw container volume drop 28% in July to 116,629 loaded TEUs, compared with 162,898 in July 2021. Port officials cited the port’s weeklong shutdown during protests over implementation of the state’s Assembly Bill 5 as the main reason for the decline.

“The port was closed nearly a week last month due to the trucker protests voicing concern over AB 5,” Port of Oakland Maritime Director Bryan Brandes said. “This congestion reduced our overall July volume.” Brandes noted the protests slowed the unloading of inbound ships and delayed imports from leaving the terminals.

Georgia’s Port of Savannah complex moved an all-time record 530,800 containers in July, up 18% from last year’s 449,916 TEUs. It marked the second-ever time Savannah has topped the 500,000 TEU mark in a month, and helped position the facility to shatter last year’s record of 5.6 million boxes moved.

To better accommodate truck drivers, the port is now opening two hours earlier; gates are now open from 4 a.m. to 9 p.m. without interruption.

The Port of Virginia posted an 8.4% year-over-year increase, processing 317,691 containers compared with 293,126 last year. It was the best July performance in the port’s history.

“We’ve brought on 10 new vessel services in the last 12 months — and five of those in the last five months — so our growth is attributable to the reworked and new ship line services that are calling here,” Virginia Port Authority CEO Stephen Edwards said.

The South Carolina Port Authority, which operates the Port of Charleston, reported an 11.7% year-over-year decline in July container volume as it processed 216,097 containers, compared with 244,821 last year. However, the port is in growth mode; it recently completed a $500 million upgrade which includes the addition of 15 new ship-to-shore cranes that stand 155 feet above the wharf deck at Wando Welch Terminal. The cranes will permit the complex to handle three 14,000 TEU ships simultaneously.

The Port Authority of New York/New Jersey typically runs one month behind the other ports reporting container figures. In June, the giant East Coast facility processed 14.8% more TEUs than in 2021, moving 859,953 TEUs compared with 749,400 in June 2021.