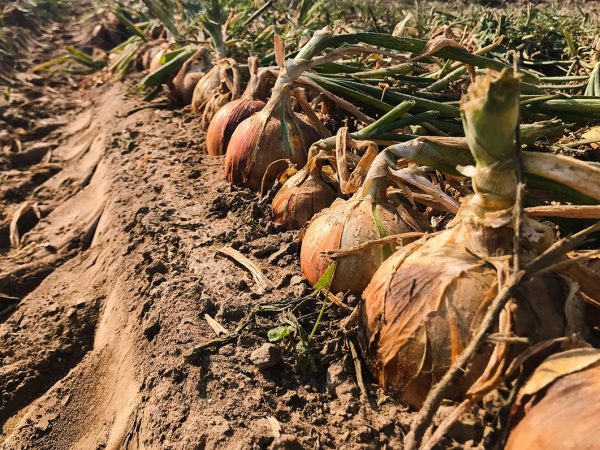 MARKET
Central California:
Robert Bell with Western Onion in Camarillo, CA, brought us up to speed with the deal in California’s Central Valley. “Still packing in Bakersfield,” he said, adding, “We’re finishing up with our late summer onions, and then we will get started with our fall long-day varieties the last week of August out of Fresno County.” Robert continued, “Movement is good, but the downward trend of the market is pressurizing it. The long-day varieties look good and will be mostly on the larger size range.” Harvest will be moving into another area soon, he said. “We’re repositioning some harvest equipment to Cuyama for the organic program, which will probably start the week of Aug. 24. Water stopped on the Aug. 3, but since we’re at 2,400 feet, it’s cooler and takes a while to dry down since we do not lift before harvest.” He added, “Tops have been rolled and Surround applied to prevent sun scalding. ‘Now we wait.’” Not one to sit still for long, Robert added, “I’m off to Phoenix Monday to meet with Sunbelt transplants about this year’s transplants and arrange for next year’s. Then off to NY to meet with growers there about said transplants. Then back home to restart harvest.”

Idaho/E. Oregon:
Herb Haun with Haun Packing in Weiser, ID, said on Aug. 12 the new season was up and going. “We’re doing yellows right now, and red and whites will start next week,” he said. “Demand is good, and the market is pretty steady right now.” Haun Packing is shipping its early onions primarily to process and wholesale, and Herb said retail loads will start next week as well. “Quality is good, and size is average and slightly above, trending jumbos and colossals,” he noted.

Dan Phillips with Central Produce Dist. in Payette, ID, reported Aug. 12 that demand and the market are good this week. “The market seems to be holding steady,” he said. “Not everyone is going here in the valley yet, so there aren’t a ton of onions out there. We are running yellows and will start our reds this afternoon. We are starting out slowly, and we aren’t in a big hurry so we can be somewhat bullish. Our demand is very good, but most of the foodservice business is cleaning up in the other areas, so we probably won’t see a lot of that business for a couple more weeks.” Dan said freight looks to be high for the startup. “We are just getting into it, and we haven’t had a lot of shipments, but we are hearing that freight rates are continuing to be high. We will know more as we start getting more shipments out there.”

Idaho:
Rick Greener with Greener Produce in Ketchum told us on Aug. 12 that demand this week is good. “We are finished with our California and New Mexico shipments,” Rick said. “I have to say that our shippers in both areas did a fantastic job for us this summer. We had quality onions and good deliveries. Now we have transitioned to the Northwest – Washington, Oregon and Idaho.” He continued, “Not everyone is up and going yet, and some shippers are holding off to start their storage shipments.” Rick said that quality out of the Northwest is very good, and he added, “Demand is good this week, too. Mediums in all colors win the top spot for demand. We have sold a fair amount of jumbos and a few colossals here and there, but not too much on the larger stuff.” Freight, he said, is “OK,” and he noted, “Buyers need to allow a day or two to secure the freight. Rates aren’t too bad, and overall I would say it’s reasonable for this time of year.”

Peru:
Walt Dasher with G&R Farms in Glennville, GA, told us on Aug. 11 that company’s Peru program, which started early due to the short Vidalia season, has seen some smaller onions. Quality has been good. “The cooler than expected weather in Peru has cost us 25 percent in the onion sizes, meaning potentially less jumbos and more mediums to start with,” Walt said. “We are hoping warmer weather will start back and get us back on track with where we need to be with sizing. I still feel good about the upcoming season even with a slower start and with everything that has happened so far in 2020 we must remain positive and continue to evolve as best we can.” Much of G&R’s volume goes to retail, with product available both loose and bagged.

CROP
Colorado Western Slope:
David DeBerry with Southwest Onion Growers in Mission, TX, told us on Aug. 12 his Delta, CO, growers expect a Sept. 1 start, and he said, “We should have all three colors by Sept. 10.” The region has experienced very good conditions leading up to the start of the new season.