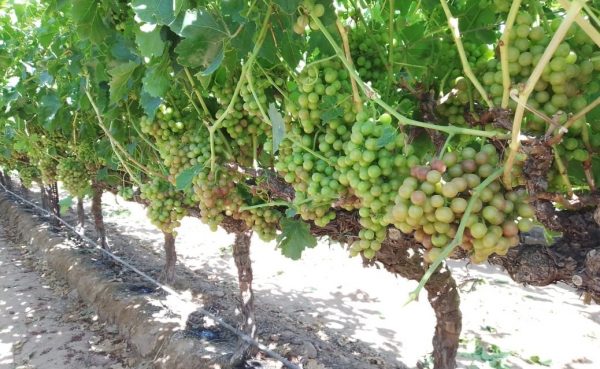 Mexico appears to be on track for a repeat of the 2019 season in which the vast majority of table grapes were shipped during June, but with even higher volumes.

Mexico’s Sonora Grape Growers Association (AALPUM) has estimated that there is a record crop of 25.5 million boxes, putting it well above last year’s 21.3 million and a few percentage points up on the 23.6 million exported in 2019 – the current record.

With less than 600,000 boxes of Sonora grapes exported by the end of week 19, the region’s growers are now entering into the peak shipping weeks, which should last until the beginning of July.

The heavy and condensed volumes raise questions about how trade will handle the supplies as they overlap into the start of the California season and what the impact on the market may be.

“There are differing opinions whether Mexico will export all of that to the USA & Canada, plus 1 to 2 million in July. Operationally and logistically, can Nogales take four 4-million-box weeks in a row? Is the market capable of absorbing that many grapes that fast? Desert grapes don’t have the shelf life or later areas, so grapes stored too long will run into market resistance,” Pandol said.

“It’s going to be an interesting transition.”

An industry representative in Mexico told a local publication in mid-May that the country’s grape season could see a slower-than-expected start due to weather conditions which have slowed the ripening process.

Marco Antonio Camou, president of a Sonora based local grape growers association, told Diario de Hermosillo [in Spanish] that parts of the region had yet to see the warmer days needed to properly harvest the grapes.

“Usually, the beginning of May is when the harvest starts, and it depends much on the weather, lately nights have been cold, days have not been very warm, and this means that the grape ripening is delayed along with their harvest,” Camou was quoted as saying.

He also said he believes that the crop could be even higher than officially forecast by the AALPUM.

But it of course remains to be seen how much is actually harvested and can be successfully sold in the U.S. in good condition.

According to AALPUM estimates released on May 17, Mexico is expected to ship 6.9 million boxes in the second half of May, 16.6 million in the whole of June, and 1.4 million in July.

A comparison of Mexican grape shipping volumes during different periods

The grape industry in Mexico has been following a similar trend to that seen in other major growing regions – including Peru, Chile and California – of increasing volumes in the second half of the season.

One is the preference of retailers not to rush to be first to market in new zones but stay with well matured late season grapes from the prior origin, like Chile in the Mexican season.

The other is the reduction of early season varieties like Perlettes and Flames and limited new varieties with which to replace them.

“The halfway point for the Sonora season has typically been June 4. Now it’s more like June 12, in part due to the elimination of some of the early volumes,” Pandol said.

The changes means that the Mexican season now runs much more in line with the early California grape deal out of Coachella, and sees increasing overlap with the Central Valley, where volumes ramp in un mid-July.

“Sometime in June retailers will decide the last week of desert grapes and the first week in Central California. The transition should occur sometime during weeks 28 and 29.  By week 30 it’s 100% Central California,” Pandol said.

As for the outlook for the California season, while official estimates have not yet been released by the California Table Grape Commission, he said the industry had been forecasting just over 100 million boxes, but following some freeze events it was looking more like 96 million.

The reduction is mainly expected in the latter two-thirds of the season, with July and August largely unaffected. Most of the crop is harvested over August through November.

Last year 102 million were forecast in the pre-season, but volumes ended up closer to 96 million.