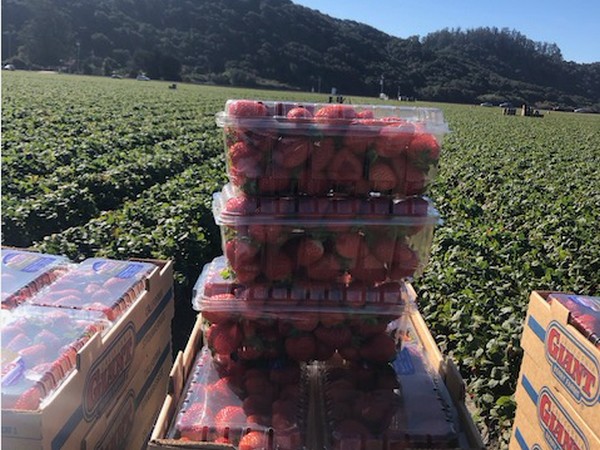 The Californian berry season is wrapping up later than usual due to mild temperatures. California Giant grows their strawberries in California, Mexico and Florida.

Cindy Jewell, the company’s vice-president of Marketing says: “The California season usually runs from January through October. Normally, at this time of year the rains have started and the nights have gotten cold, but we are still seeing really mild conditions now. The spring-crop is still producing fruit and is still being harvested, which is unusual for this time of the year. So, the California season has been really long this year which means that it should actually complement the Mexico and Florida season. Usually, there is a bit of a gap between the seasons but this year there will be an easier transition. Our harvest in Mexico and Florida will begin this week or next week, to complement the fruit coming out of California, and those seasons will run through the spring.”

Volumes down
While the season has run longer than usual, the volumes are down from last year. “Last year was a record year for the strawberries so that would have been difficult to beat. We have had enough fruit to keep the pipeline full and meet the customer demand. The demand this time of year is less than peak summer season, but it is a good market for both grower and customer. The prices dipped a bit last week, but have since recovered and we are seeing double-digit pricing right now,” Jewell explains.

While volumes were down a bit, the product’s quality held up. Jewell says: “The quality this season has been excellent. The amount of trays being harvested every day is declining because the days are getting shorter but the product looks good. The Mexico and Florida seasons are looking great so far as well, and we are expecting the winter-season for strawberries to be really nice. The varieties grown in Mexico and Florida are short-day varieties to accommodate the different geography and timing. Strawberries aren’t labeled with varieties though, so the consumer isn’t aware of this difference in the varieties. This might change in the future, as growers and packers try to distinguish themselves in the market, but we aren’t there yet.”

Organic strawberries
The company also grows a steady supply of organic strawberries, ranging from 10-15% of their total crop, to complement their conventional product. “There is a core-group of people that will buy organic year-round, but most consumers base their purchase off pricing, or quality rather than whether it is organic. We are seeing that for other berries, like blueberries for example, the organic market is growing, but for strawberries it has remained pretty static” Jewell says.

Raspberry season extended as well
Raspberries, just like the strawberries, are also enjoying an extended season this year. “We are still producing some here in California, but the Mexican season is also kicking off. The majority of the raspberries come out of Mexico, with that season beginning right now, in November, and running all the way into May. This is a long season and we always see really good volumes and quality coming out of Mexico. This is an area that we are growing in, and it’s really well-received by our trading partners.”

Year-round raspberry supplies
The raspberry season this year has been good. “Raspberries continue to be a customer favorite, and in the past we only had our California crop so we couldn’t supply year-round. Now that we’ve added our Mexico crop we are able to produce and supply year-round. This is our third season of the Mexico crop and we’ve been adding volume each season to meet the rising demand. Retailers prefer having a one-stop shop, so having the raspberries as part of our year-round offering has been really well-received,” concludes Jewell.