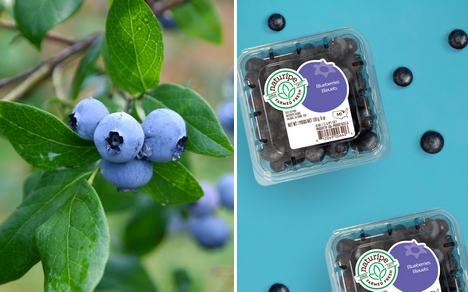 Naturipe Farms “This will be our biggest blueberry year ever”

Naturipe Farms confidently predicts 2020 as the company’s largest blueberry production year ever. “We are seeing an increase in production that we’ve been planning in response to growing consumer demand,” says CarrieAnn Arias with Naturipe Farms. Although both conventional and organic production show an increase, the organic category experiences a higher growth as it is coming from a lower base.

Naturipe’s blueberries are grown in the United States and Canada as well as Argentina, Chile, Peru and Mexico. “The Pacific Northwest, Peru and Mexico are the areas that will see the biggest increase in production,” says Brian Bocock with Naturipe Farms. The company has been working on increasing its production levels for the past five years. “We are always in pursuit of the very best growers in the world who are willing to innovate and leverage technology to increase yields and bring the tastiest berries to our consumers.” Controlling weather by growing under tunnels as well as selecting the best varieties also support an increase in production. “It helps us consistently yield better results both in terms of volume, and most important to us, taste.”

750 million pounds in 2020
“Technology has the added benefit of helping us accurately estimate the size of our harvest,” said Bocock. “We are always trying to improve the forecast for blueberry crops. As a result, we predict Mother Nature will bring us almost 750 million pounds of fresh blueberries industry wide this year,” said Bocock. The organic category represents about 15 percent of this total number. “Our company will play a significant role in this forecast as the largest fresh blueberry supplier in the world.” The majority of Naturipe’s blueberries are sold in the United States and Canada.

Is there room for blueberry demand to continue growing? Bocock expects consumption to continue increasing in the next few years. However, it may plateau for a while due to grower economics.