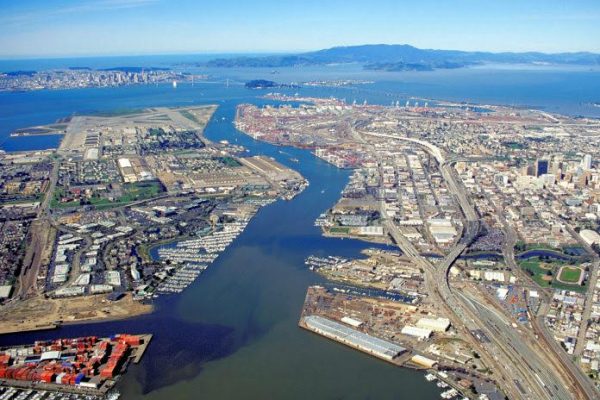 Congestion in Southern California causes ripples in the north as Oakland volumes fall in January.

Both import and export volumes at the Port of Oakland have fallen by more than 11% as the Covid-19 crisis induced congestion has impacted on the Southern Californian ports, with the shockwave spreading both north and east.

According to the Port of Oakland the delays to vessels at both Los Angeles and Long Beach, which now stands at 60 ships at anchorage outside the ports, means they miss their scheduled arrivals in Oakland. In addition Oakland currently has a reduced berthing capacity while new, larger, cranes are being assembled. What is more, the port says its space for exports has decreased as carriers look to return empty boxes to Asia.

Import volumes dropped 11.9%, while exports fell 11.3% in January this year, but in a statement, Oakland said this was an “anomaly” when import volumes in the California region were increasing due to consumer demand. As a result, the port authority expects volumes to increase in the coming months as vessel logjams ease.

“There’s a lot of cargo trapped on ships just waiting to get to here after departing Southern California,” said Port of Oakland Maritime Director Bryan Brandes. “Our concern is getting shipments to our customers as quickly as we can.”

As congestion levels in Southern California increased French line CMA CGM remedied the problem this month by introducing a service to Oakland.

“The ships in CMA’s weekly service make Oakland their first US call, bypassing Southern California,” said the port, adding that other ocean carriers are contemplating Oakland first-calls by mid-year.

A decline in Oakland’s imports and exports in January, however, only led to an overall volume decrease of 5.8%, due to the 15.6% increase in the shipment of empty containers.