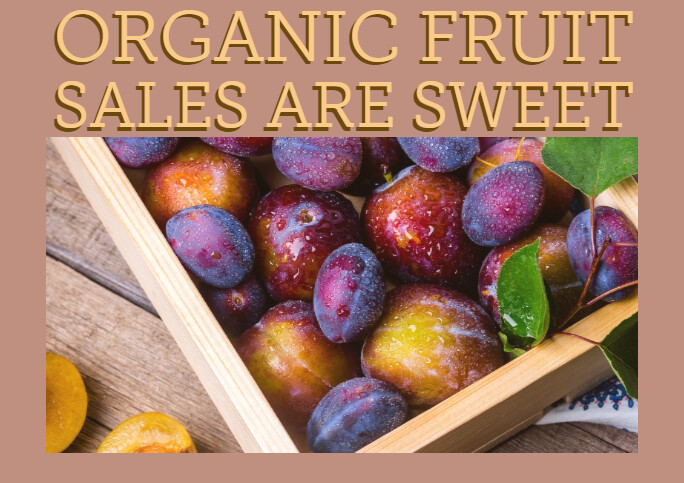 From grapes to grapefruit, sales of organic fruit are on the rise, and suppliers anticipate ample volume of good-quality product for the late spring and summer months.

However, the start date this year will be a bit later than usual, with most of the crop coming on in July rather than late June.

Stemilt’s peach and nectarine crop, which also is all organic, grew by about 10% this year, he said.

“We have been organic for years now, but the growth will allow us to have more nectarines during a time where the balance of peaches to nectarines was a little out of line,” he said.

Stemilt’s organic apple crop is winding down, but the company should have fruit available into the summer.

“We have had unbelievable sales on our Lil Snapper organic apple and pear program,” Pepperl said.

Stemilt plans to kick off its organic cherry program in mid-May.

“Again, Stemilt will have a dominant position on both organic dark sweet and organic rainier cherries,” Pepperl said.

“Fruit size is pretty typical for the respective varieties,” he said.

Quality and condition are good, he added.

“Fruit is storing quite well this season and coming out of storage with good eating qualities.”

Viva Tierra Organic Inc., Sedro-Woolley, Wash., will have a full line of imported pears from Argentina from the end of April through June, said Addie Pobst, organic integrity and logistics coordinator.

The company should have gala, granny smith, fuji and red delicious apples in May with more varieties coming in as the season progresses in Chile and Argentina.

Viva Tierra will have California pears and apples in late July before sourcing from Washington, she said.

San Diego-based Organics Unlimited Inc., which grows and distributes organic cavendish bananas from Mexico and Ecuador, is in peak production, Mayra Velazquez de León, president and CEO, said in mid-April. That peak should continue into September.

“Things are even better than expected from the production side of things,” she said.

“Banana quality is superior, and we haven’t experienced any major problems with weather or crop diseases.”

Organic bananas have been gaining in popularity, she added.

“Organics Unlimited is well prepared to handle an increase in consumer demand for organic bananas by supplying the freshest, sustainable, organic bananas while giving back to the communities we serve,” she said.

During the summer, the company will have valencia oranges, lemons, grapefruit and other local California citrus like golden nugget mandarins.

The season, which will continue for a few months, should be a good one, he said, with good quality and sizing.

Valencias should continue through August, and the company has a grapefruit variety that comes on in September, he said.

Eco Farms will have organic avocados from California until September, then will source from Mexico, which ships avocados year-round, and Peru.

“We need multiple sources (for avocados) to keep up with demand,” he said, “especially in the summertime.”

On the berries side, Naturipe Berry Growers, Salinas, Calif., plans to kick off its organic blackberries in mid-June and continue the program through the summer, said Craig Moriyama, director of berry operations.

The company was shipping organic strawberries out of Salinas/Watsonville in early April.

Organic blueberries as well as conventional blueberries will be ramping up in May from Delano, Calif.-based Munger Farms, which, like Naturipe Berry Growers, is a partner in Naturipe Farms LLC, the Estero, Fla.-based sales and marketing operation.

Turning to table grapes, Bob Bianco, co-owner of Anthony Vineyards, Bakersfield, Calif., said about 70% of the fruit his company ships is organic, and that figure seems to be increasing every year.

The company has about 20 organic varieties, including high-flavor grapes like Ivory and Krissy.