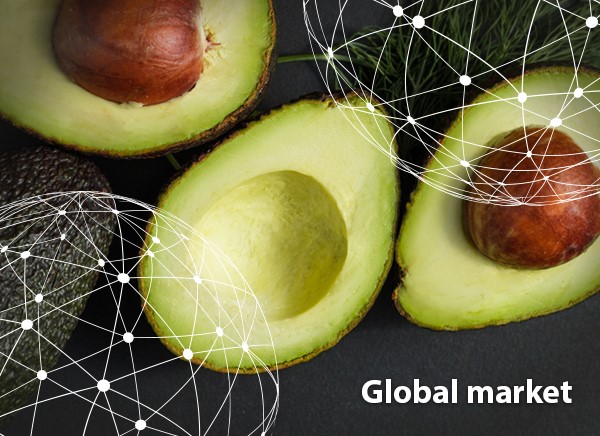 The Netherlands: Good avocado sales; shortage of larger sizes expected in the short term
The coronavirus crisis seems to be driving up the demand for avocados. A Dutch importer says that avocados are among the most sought-after categories, together with citrus and summer fruits. Peru and South Africa are the countries that will be supplying the fruit in the near future, although the importer says that the volumes arriving are still small. “In the short term, I foresee a shortage for the larger sizes. Of course, that can change later in the season, but now the demand for Hass avocados is particularly good. Sales prices range between 12 and 14 Euro (4 kg) for sizes 14-20 and between 11 and 12 Euro for the smaller sizes.

Belgium: Trade going well
There is currently a great demand for more luxurious products, including avocados. Prices are currently at a normal level for the time of year. A Belgian trader is also satisfied with the quality and appearance of the avocados.

Germany: Low demand due to start of German strawberry season
The avocado market is quiet in the German wholesale. The focus now is on regional seasonal products, like strawberries and asparagus, which are traded in large volumes. Exotics are therefore pushed more into the background at this time of the year, according to a trader from Karlsruhe.

“Until recently, we still had beautiful avocados from Spain. They were very popular among our customers. Now, however, we have switched back to overseas goods, which we receive via Dutch large importers. The origin varies depending on availability and quality.”

France: The logistics is causing headaches at supermarkets
Although the French government is calling on the population to consume French fruit and vegetables, avocados have not been affected. Still, the demand has changed in recent weeks. Consumers are now buying packaged avocados in the supermarkets and no longer loose ones. There are concerns about the supply of French supermarkets, since there are fewer workers for the harvest and transport is difficult.

Spain: High demand will cause season to end earlier
The Spanish avocado season will end about 15 days earlier than last year due to the surprisingly high demand for all sizes, even though the total volume harvested this year (80,000 tons) was greater than that of the previous one. Despite the coronavirus, prices have remained high, even for the smallest sizes that often face strong competition from Kenya, Mexico or Chile. At the moment, prices stand at 14-15 Euro per box and these are expected to remain stable until the beginning of May, when large quantities of Peruvian avocados will arrive on the European market.

Italy: Shift from Hass to Greenskin avocados
There’s no crisis in the avocado market. A major wholesaler in Northern Italy says that the demand remains stable, despite the coronavirus. Retailers and specialist stores are the current sales channels, while the catering industry is absent due to its closure. The focus is increasingly shifting to the Hass variety, at the expense of Greenskin avocados. The Greenskin are supplied by South Africa, Kenya and Peru, while the Hass come mainly from Peru and Mexico. The seasons in Spain and Morocco are now coming to an end. Prices fluctuate, but offer interesting prospects. Currently, a box (4 kg) of Greenskin avocados is sold in the wholesale for between 8 and 12 Euro, while a box of the ready-to-eat Hass oscillates between 13 and 20 Euro.

South Africa: Larger volumes this year; formidable competitor for Peru in Europe
There isn’t a great avocado supply on the market at the moment. Rainfall and the Easter weekend have delayed the harvest, but stocks are expected to increase in the coming weeks. The average price on the local market amounts to around 8.23 ​​ZAR (€ 0.40) and is thus lower than last week. The prospect is that the price will drop if more volumes come on the market.

During the first week of the lockdown in South Africa, fewer avocados were sold due to the closure of the catering industry. Private buyers were also unable to purchase avocados on this market due to legislation that has now been dropped. Exporters say that there is a lower demand for Greenskins in the UK, but that the market for the Hass variety is stable. In the period from week 17 to week 22/23, this year’s larger harvest (30% increase in the volume) is expected to clash with the also larger production from Peru.

There have been sharp peaks in the production, with a record harvest in 2018, followed by a 40% drop in the volume in 2019 and an expected 30% rise in 2020. Growers want to avoid these peaks by manipulating the harvest. The sizes of the avocados are smaller this year, but that is not a concern for the exporters. Most South African avocados are intended for the European market and the UK. As for new markets in the future, exporters see the best opportunities in Japan.

Mexico: Higher prices than usual
There are two main avocado producing states in Mexico: Michoacán and Jalisco. The avocados from Michoacán are mainly exported to the US and growers aim for a continuous supply. Jalisco focuses more on the Canadian market and also Japan and Europe. March and April are the months when fewer avocados are harvested. Volumes will increase again in May. This also ensures that prices in these two months are higher than in the rest of the year. In any case, because of the coronavirus, the demand has risen and prices are higher. Normally, prices rise by 30%, but this year they have increased by 40-45%.

Colombia: Avocado cultivation continues to expand in the country
The South American country has expanded its avocado production in recent years. Many hectares have been planted with new trees that should come into production in the coming years. The country is able to harvest avocados in 46 to 48 weeks of the year, with the off season taking place between March and July and the peak season between September and February. The peak is reached in a period when there is little competition from other countries. Europe is the main destination for Colombian avocados, but given the growing volumes, it is also important to look for other destinations.

United States: California almost had surpluses
California’s avocado production is strong this year. Growers have already harvested 21.2 tons, compared to 2.3 tons around the same period last year. This time we can speak of a normal avocado harvest. The avocado industry in the US has been holding its breath for the past two weeks, given the threat of an avocado surplus. The rainfall, which temporarily brought the harvest to a halt, and a decline in Mexico’s production over the holidays have prevented an excessive accumulation of stocks.

The demand has shifted to the retail. Not only has the coronavirus played a part in this, but also the large volumes and strong demand early this season. Almost imperceptibly, the avocado market in the United States has undergone a major shift. First, the volumes skyrocketed, but then the situation changed radically due to the closing of food service establishments and the hoarding in supermarkets. It remains to be seen what will happen in the coming weeks, but sales to the food service will be very meager. “I don’t know anyone in this business who isn’t concerned,” says someone from the California avocado industry. It is also unclear how prices will develop in the coming weeks. Prices skyrocketed when people started hoarding, but then plummeted again and now seem to be stabilizing somewhat.

China: Avocado market slowly picking up again; imports from Peru and Philippines
The avocado market in China is mainly focused on imports. Currently, there is a great supply from Peru, but imports have also started arriving from the Philippines for the first time. The avocado market has been very tough lately, as not many people are buying avocados at this time. A lot of them are normally used in restaurants and bars, but since they were closed, fewer avocados were purchased. As a result, sales were very slow, which makes things difficult for a product that doesn’t have a very long shelf life. Now that restaurants, bars and businesses are all open again in major cities, there is good hope that the demand for avocados will gradually increase again.

Australia and New Zealand: Campaign to promote local production
With the closure of the food service because of the coronavirus, 10 to 20% of avocado sales will no longer be made on the Australian market. In order to maintain the demand for avocados, promotions have been launched in Australia and New Zealand to encourage people to continue buying local products. Australia is almost about to shift from Shepard avocados (a Greenskin) to the more famous Hass. The Shepard season has been somewhat more limited than last year. For its part, an Australian company hopes to grow in the market with avocados sold under the Viavi brand, with the season running from March to April.