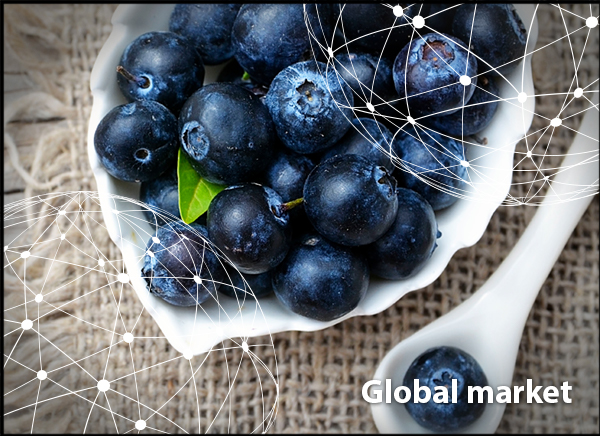 In recent years, the high prices recorded and the growing consumption of blueberries have led to increases in the volume produced and in the number of growing countries. In South America, there is fierce competition between reigning champion Chile and challenger Peru. At the moment, the volumes seem to be growing faster than the demand, so prices are under pressure on the world market.

South Africa: Provisional figures show a growth of 4,000 tons; further growth expected
The current export season is over in South Africa. The final figures for this season are not yet known, but according to the first figures, 12,200 tonnes have been exported, which is more than 4,000 tonnes more than in the previous 2018/2019 season (7,572 tonnes). This growth is in line with the sector’s expectations.

The prospect is that another 1,000 hectares will be added in the coming years, bringing the total to 3,400 hectares in the coming five years. In 2013, there were still just 437 hectares. The Western Cape is the dominant growing region for blueberries, but blueberry cultivation is carried out in every corner of the country. The development of varieties that are not as dependent on low temperatures has made this possible. In the early years of blueberry cultivation, there were only a few growers and exporters on the market, but the modern and open blueberry varieties have lowered the entry threshold for new growers and exporters.

Mexico: Low prices are a cause for concern for the growers
The season runs from September to June, with the peak between February and April. This year there have been some delays due to the cooler temperatures in the country, but this had had no impact on the volume or quality. The volume of blueberries from Mexico is growing and that is pushing prices down. There are more countries with larger volumes and good quality on the market; as a result, high-quality blueberries are no longer as easily marketed. Growers in Mexico are looking into the cultivation of special varieties, such as the jumbo blueberries. North America remains the biggest market for the country.

Chile: Focus on organic blueberry production
Most blueberries come from the central parts of the country. The Chilean production is also greater than last year’s. Most blueberries are shipped to the US, but that volume is falling. In contrast, exports to Europe and Asia are on the rise. Chile is focusing on the cultivation of organic blueberries, whose has increased by 35% in 2019 compared to 2018.

Peru: Fight for the first place
In recent years, the Peruvian production and export of blueberries have grown strongly. The country is currently in a neck-and-neck race with neighboring Chile to become the world’s number 1 blueberry export market. As in Chile’s case, most volumes go to the US, but exports to Europe and Asia are also rising.

The Netherlands: Large volumes of blueberries on the market
Blueberry sales are difficult at the moment, in the sense that the volumes are very large and the demand is slow, according to Dutch importers. There is a lot of fruit available, now more from Chile than from Peru. Prices are at a low level and have actually been there since the Christmas period. In addition, the quality of the berries is very unpredictable. The first Moroccan blueberries are now being picked.

Germany: Peru dominates, Chile puts pressure on the market
At the moment, the blueberries on the German market come mainly from Peru, Chile and Morocco; however, these are not the only origins, which means that there is some oversupply and, consequently, pressure on prices. “We are aware with the fact that sales tend to fall every year in January and February, as there is relatively little demand. Retailers are trying to tackle this imbalance between supply and demand by offering blueberries as a promotional product. Nevertheless, there is also a huge supply of all sorts in the wholesale market,” says a trader who buys his goods mainly on Frankfurt’s wholesale market. Large sizes of the popular Duke variety are sold on the German wholesale markets by an average of € 4.75.

Germany is also growing increasingly more blueberries. In the Land of Lower Saxony, eight growers have merged and are marketing their goods under Blaubeergarten GmbH. German blueberries are sorted and packaged at one location during the season (June-August). “Our next step is to extend the season as long as possible using modern cooling technology. We also want to sort and package organic blueberries at the same location in the short term,” says the firm’s management.

France: Four origins on the market
The demand for blueberries in France is growing year after year. There are currently four different origins on the market: Peru, Chile, Spain and Morocco. The Chilean fruit has been sold for cheap prices since the beginning of the season, even though the quality of those blueberries has been higher than last year’s. In general, however, the quality is not as good as that from other countries. This is mainly due to the long distance (more than 5 weeks by boat) and the old varieties that the land grows.

Italy: Growers want to extend the season
The Italian blueberries are not currently on the market. On the wholesale market there are now Peruvian blueberries with prices oscillating between 12 and 13.50 € / punnet. Italy wants to extend its own production season in order to be less dependent on foreign countries. The areas devoted to blueberry cultivation are drastically expanding. Consumption is driven by the fruit’s good reputation as superfood. Blueberries are increasingly included in snacking packs.

“At the moment, we have a season lasting 4-5 months,” says an employee of a cultivation company in Italy. “With new varieties and cultivation techniques, we can reach the 8 months. The product’s prices remain stable throughout the year. The production costs in Italy are high, with at least 80% corresponding to labor costs; however, the blueberries are high quality ones, so customers tend to prefer them.”

Spain: Surplus and overlap expected in the season
The blueberry harvest kicked off in Huelva with the early varieties, but with small volumes. The season started a little earlier this year, but rainy weather did not help with the fruit’s growth. No significant volumes are expected until mid-February. Morocco is increasingly present in the European market, but most Spanish companies import Chilean and Peruvian fruit, as well as the last blueberries from South Africa. Mexico is also gaining ground in Europe. The Chilean volumes are expected to peak in weeks 7,8 and 9, which will result in an overlap with the Spanish season. Spanish blueberries currently have attractive prices, slightly higher than those of the Chilean production.

In the previous season there was a surplus with disastrous consequences for the sector. This year, the situation is expected to be even worse. The sector has grown strongly in the last seven years and the acreage and maximum capacity have yet to reach their peak. 70% of the volumes are delivered in April and May, when the free varieties Star and Ventura are at their peak.

China: More countries exporting to the Chinese market
There are several areas devoted to blueberry production in China, but none of them are currently in season. The campaign is expected to start around March / April. The blueberry supply is now mainly imported. China’s largest blueberry suppliers are Chile and Peru. Peru started exporting in September, when there was a good market with a good price. Chile started a little later, when the Peruvian season was about to end and the Chinese holidays were almost starting.

More and more countries are being allowed to export blueberries to China. Argentina, for example, entered this market for the first time in 2019, but ended up in a difficult position. The competition with Peru and Chile had an impact on the sale of the Argentinian blueberries. The problem is that they are not that well known yet; therefore, they need to build a reputation for themselves.

Uruguay also made its first delivery to China in October, but they are finding it difficult to compete because of the 30% import tax. Meanwhile, the two largest competitors, Peru and Chile, enjoy 0% import duties. Mexico also signed a deal with China at the end of 2019 to export blueberries to China. The supply of blueberries is increasing every year, but the demand is also on the rise. The conclusion is that the blueberry market is developing well in China.

United States: Market recovers from low prices in December
Blueberry prices in the United States are rising back to normal levels. In December, prices had fallen due to the large volumes on the market. The price actually fell below the break-even point, which is the completely opposite situation to that of December 2018, when there were high prices on the market. More countries are exporting blueberries to the US, so the volumes available increased in December. In addition to the traditional production countries, which are Chile and Argentina, more blueberries from Peru and Mexico are reaching the US. Chile is still the dominant player. A small volume comes from California.

Australia: Various reports about season expectations
The peak of the Australian blueberry season is in sight, but there are conflicting reports about the growing conditions. The dry weather seems to have had an impact on farms in northern New South Wales, as did the water shortage and damage from storms and hail reported in early spring. Other reports speak of another large volume of high-quality blueberries, and thus a long season. The crops in Tasmania and Victoria are also in full bloom in January.

New Zealand: Hope that the year will be as good as 2019
New Zealand growers are hoping for a season like last year’s, when a record 7 million blueberry punnets were consumed and the value of supermarket sales stood at 14.9 million Euro.