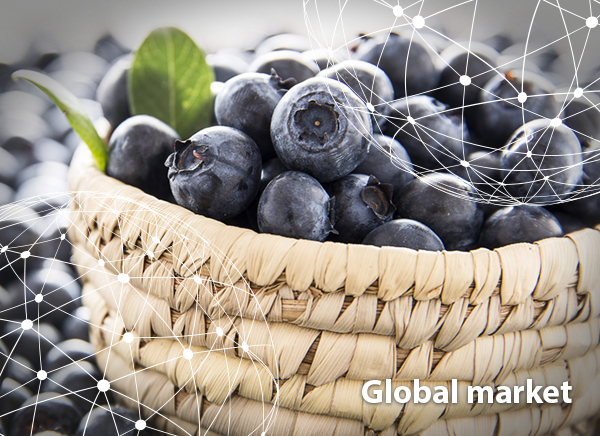 In week 42, the blueberry market is mainly dominated by Mexico, Peru and South Africa. Peruvian blueberries in particular are available in all continents. The first shipments are arriving in China again, and now that the European and North American seasons are coming to an end, the blueberries from the South American country are taking over. Something remarkable, however, is that more South American markets are entering the world market with force. In Australia, prices have fallen sharply due to an oversupply.

The Netherlands: Blueberry shortage, despite greater supply
South America and South Africa are currently the most important blueberry suppliers on the market. According to a Dutch importer, it is worth noting that some new production countries are increasingly present. “In South America, for example, in addition to established countries such as Peru, Chile, Uruguay and Argentina, more and more berries are coming from Brazil and Colombia. Qualitatively, these berries belong in the midrange. From Africa, we see an increasing volume coming from Namibia and Zimbabwe. According to him, the market situation is very good. “Peru and most other countries have a higher production than in previous years, but in recent weeks there has been a shortage in the market and the demand has reached a very high level. The shortages are becoming somewhat less of an issue because prices are high and the demand is falling, but we can still speak of an above-average price. Peru is now at its peak in terms of volume, and as a result, more promotional campaigns are being carried out, especially with packaging formats of between 400 and 750 grams, with 500 grams as the standard. This is a very good development, because it means stocks are going fast. In the regular programs, the German supermarkets in particular are also increasingly switching from the 125 gram to the 200 gram package.”

Germany: Strong year for domestic production
In Germany, the domestic season has now come to an end almost everywhere. Only in some places are small quantities still being delivered. Peru currently dominates the supply, but South Africa and Argentina are also present. Argentina has had a good harvest, but due to the lack of air freight capacity caused by the pandemic, the volumes are only slowly arriving in the European market, says an importer. The demand from the retail sector is not that high, and 200 and 300 gram packs are mainly on offer, instead of 500 gram ones.

The domestic production has fallen up to 40 percent below average in some areas due to the lack of seasonal workers and frost damage. Due to the positive effect of blueberries on the immune system, sales were further stimulated by the coronavirus pandemic. Partly because of this, the season also ended a bit earlier than usual. Lastly, it is worth noting that blueberries are increasingly becoming a year-round product in Germany.

Italy: Domestic season already over
The Italian blueberry season has already come to an end. Currently, most blueberries on the Italian market come from Peru.

An important trader in Northern Italy, who closed the season in September, says that the Italian production is growing every year. Also, there is an increasing focus on quality, on varieties with a larger size and a better shelf life. “In the 2020 season, the yields per hectare were average and the prices were also satisfactory. They ranged between 6 and 12 € / kg, depending on the period, size and quality. At the beginning of the season, in the months of May and June, there were problems to find workers because of the coronavirus, but after that the situation stabilized.” In the north of Italy, various kinds of blueberries are grown in greenhouses to bring the the start of the harvest forward to mid-May.

In Campania, the blueberry season ended in August. “It has certainly been a good year, but not one to get enthusiastic about. Good volumes have been harvested, with an average price of 4-5 € / kg,” says a trader. Currently, the wholesale markets are selling class I Peruvian blueberries for around € 15 / kg.

South Africa: Prospects revised due to low temperatures
The blueberry production is smaller than initially expected due to the cold weather in the northern regions of the country. Berries ZA had estimated the harvest this season at about 23,000 tons, out of which 17,000 were intended for export. Now those prospects have been revised down to 22,000 tons, with also substantially lower exports. Up to week 41, 3,703 tons of blueberries were exported, with the United Kingdom and the Netherlands as the main destinations. The South African blueberry season will reach its peak in the next ten weeks.

China: Imports from Peru available on the Chinese market again
The first blueberries are already available on the Chinese market. At the moment, they are still arriving by air, but in a few weeks the first reefer containers coming by sea will follow. Some Chinese exporters say that the berries are of lower quality this year because a greater number of smaller companies from South America are allowed to sell their products in China and they are not always of the right quality. Because of that difference in quality, sales are not going as well as last year. However, some large companies that have already built a reputation in the Chinese market are not affected. Sales are going well for them. Several major players have therefore increased their exports to China.

This year, the average price for import blueberries is slightly higher than in the previous one, as growers expect a lot from the Chinese market and are asking for higher prices. The larger exporters also charge high prices, but at a stable level. For the first time this year, Peruvian blueberries are also arriving to Taiwan. The first reefer containers with blueberries departed at the beginning of October. However, the focus for most exporters remains on the Chinese mainland.

United States: Shortage on the market
There is currently a limited supply of blueberries on the North American market. A considerable shortage is expected, especially in weeks 42 and 43. The domestic season is now over and the market is currently dependent on imports from Mexico and Peru. The prospect is that there will be 20-25% more good quality production, although this remains to be seen.

In the meantime, some blueberries from Peru are also arriving in the US. A larger harvest is expected there, although imports are not yet consistent at the moment.

The shortage is partly a result of the volumes that go to Europe and Asia. After all, when Peru started, the price was low, so the blueberries were diverted to other destinations. Only when there is enough does the US become interesting. The import movements have thus had an impact on the domestic blueberry production. For many regions, their marketing window has become a more competitive period. Switching to new varieties is often difficult, as it takes 10-12 years for the plants to reach maturity.

While the markets are now strong, they should level off in November. A North Carolina grower predicts that prices will range between $ 28 and $ 32 in the first three weeks of November as a result of the growing volumes. Peru started harvesting just over a week ago and that fruit should reach North America by week 44. The Mexican supply will also get stronger at that point. “The supply is increasing, but we still have a few weeks ahead of tight markets here in the US,” said the grower.

Mexico: 20-25% increase
The season started for Mexican growers in October and the volumes are expected to increase by 20-25%. The US is the main export destination. The volumes shipped are growing and the supply for US importers is currently still limited. Exports should grow in the coming weeks, while Peru will also be shipping more. This can ultimately result in some pressure on prices.

Argentina: Better quality
Argentina’s blueberry season is already underway, although its volumes are lower than those of Peru and Mexico, which are the main suppliers at this time of the year. Importers see higher quality fruit coming from Argentina this season, compared to the previous one.

Peru: Longer season and bigger harvests
This year, the start of the season has been somewhat staggered. Depending on how the harvest goes, the total production is expected to increase by 40% compared to last year, although it is still too early in the season to confirm this preliminary forecast. Europe, the United States and China receive the majority of the shipments. The season is expected to last until February. As the volumes grow, prices should fall, as it usually happens at this time of the season.

Australia: Prices dropped dramatically due to abundant supply
The blueberry season in New South Wales is in full swing and sales prices have fallen dramatically in recent weeks due to an abundant supply. Despite the good quality, the price of a 125 gram tray has fluctuated around 2.50 AUD (€ 1.51) at most major supermarkets and has sometimes even fallen below that.

New Zealand: Value of exports continues to grow
According to the latest annual edition of Fresh Facts, New Zealand’s blueberry exports continue to grow every year. In 2019, the fruit’s exports were worth 38.9 million NZD (21.97 million Euro); in 2018, the total value was 34.8 million NZD, and in 2000, 6.8 million NZD. The report also revealed that 3,040 tons were harvested from ​​640 hectares, and that the domestic value in 2018/19 reached 23 million NZD (13 million Euro). In the domestic market, processed blueberries were worth NZD 2.8 million (Euro 1.6 million).