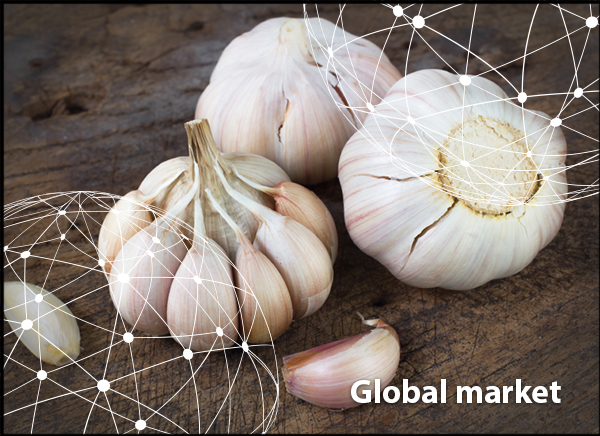 The prices paid for Chinese garlic have fluctuated a lot lately. They are currently high, and that is having an impact on the European market. It is worth noting that garlic grown in Europe is gaining more and more ground in many European markets, as consumers are looking for an environmentally-friendly alternative to Chinese garlic. In the US, imports from China have been hit hard by the increased import rates, giving a boost to the demand for domestic garlic. Mexico and Peru are happy with the campaign’s results.

The Netherlands: Garlic in China is more expensive than what we can make here
According to importers in the Netherlands, garlic sales are fairly stable. As a result of the licensing system, fairly stable volumes are coming in, but the high price in China is having an impact on the market. The price of garlic in China is higher than what we can make here, importers say. According to them, this is the result of pure speculation, because the cold stores are packed. The selling price of garlic currently ranges between 18 and 23 Euro. The period between early November and mid-December is traditionally a busy one when it comes to garlic sales, and this often also applies to the period after mid-January.

Germany: Small sales peak and early start of the Egyptian season expected
German garlic importers are very pleased with the current sales. “A small peak in sales is expected in the period leading up to Christmas,” said a specialized importer. Dutch products will be offered until the beginning of January. However, due to the lack of supply, the price is rising considerably and a switch to Egyptian products is expected to happen earlier than normal.

Spanish goods are expected to be exported to Germany until May / June, after which they will immediately switch to the new Spanish harvest. Here too there are talks of shortages and a significant rise in average wholesale prices.

In addition to the aforementioned suppliers, China remains one of the main players in the global garlic market. “Due to the growing demand for environmentally-friendly local alternatives, the European productions are gaining ground at the expense of Chinese goods. For this reason, we are also seeing more and more garlic of German origin. Given the generally excellent product quality and the support from consumers, I also expect gradual growth in this product segment in the coming years,” says a trader.

France: Volumes available until March
There is still garlic available on the domestic market. Some suppliers will be able to offer it up to and including March. Just like other European countries, France has been dealing with quality problems. The demand is good, mainly due to the fact that supermarkets and wholesalers are increasingly interested in French garlic, and as long as stocks are available, they will continue to purchase this garlic. The planting of the new garlic has been delayed somewhat by the constant rainfall in November. In fact, some growers are still working on the planting.

Spain: Better season than last year
The Spanish garlic harvest finished at the end of August. A total of 280,000 tons were harvested. The acreage has been reduced by 20% compared to last year. This was particularly noticeable in the Castile-La Mancha region, where most Spanish garlic is grown.

Many growers stopped growing garlic after the dramatic season of 2018. This season was marked by extremely low prices and quality issues. The rains in May 2018 took a great toll on the quality of the early harvest from Andalusia and the purple garlic from Castile-La Mancha, which were harvested in June. This year, the quality is better because the weather has remained dry during the harvest period.

The high prices of Chinese garlic and the better quality of Spanish garlic have led to a better market situation with acceptable prices, even though they do not yet accurately reflect the good quality of the product. Spanish exporters do not understand why Spanish garlic is still cheaper in Europe than the garlic from Argentina or China. “It seems impossible to raise prices. This has to do with two things. On the one hand, many growers are in a hurry to sell their garlic, given last year’s bad experience. On the other hand, large distributors have huge bargaining power. The supply of Spanish garlic is very spread out. The atomization of the supply, combined with the arrival of new, inexperienced growers, has made it difficult for garlic prices to rise,” says a spokesperson for a garlic association.

Earlier this year, Brazil was prevented from imposing higher import rates on the garlic from Spain and other European countries. As a result, Brazil is still Spain’s largest market outside Europe. Spanish garlic exports have increased by 10% thanks to new overseas markets, such as Canada and the US. Prospects point to the 2019 stocks running out before the new harvest of 2020 hits the market.

In Andalusia and Castile-La Mancha, the white and purple Spring garlic have already been sown. Purple garlic is now being sown in Castile-La Mancha. This will last until mid-February. The rental prices for the land are very high and this is delaying the expansion of the acreage. It looks like the acreage will remain stable next year.

Italy: Small harvest and high prices
This year there is not a lot of Italian garlic available and prices are higher than in 2018. The main production areas are Emilia-Romagna, Veneto, Campania, Sicily and Abruzzo.

“Garlic prices are about 20% higher than last year. Spain is a major player on the Italian market. In general, the quality and quantities are satisfactory and do not differ much from previous years. The average price on the wholesale market stands at around € 2.30 per kilo, but this differs per variety. A striking development is that there have been sustainable innovations in the field of packaging,” says a trader from Abruzzo.

An agronomist from Basilicata says that he is dealing with a 15% drop in the production. “This is due to the climate issues that we faced in the spring.”

According to another trader, the prospects for Europe are not good. “The European market is in a dip. The demand is low, there are many different countries on the market and there is a lot in the cold stores. We are hoping for a market revival so that current stocks will be sold by the time the new harvest comes on the market in May or June.”

Ukraine: Volumes are rising steadily
The garlic acreage is expanding yearly in Ukraine. “It is a short season, as the garlic is on the market from August to November. From October to July there is mainly Chinese garlic on the shelves. This is mainly due to a lack of good storage facilities in our country,” says an exporter.

According to the exporter, Ukrainian garlic has a lot of potential. “It has a strong taste and large cloves (4-6 cloves per bulb).” The biggest markets for Ukraine are the Baltic states and Belarus. Smaller quantities are also sold to Poland, Germany and Great Britain.

It has been a challenging season for the Ukrainians, because the sizes have been small. Some companies saw opportunities because small garlic is very well-suited to industrial purposes.

China: Fluctuating prices
The new garlic came on the market in June this year. The price of the crop has fluctuated a lot in recent months. In the beginning of the season, prices were high, but then they dropped again, only to reach high levels once more in October. The prospect is that prices will fall again in the coming months, as more supply comes on the market. Yet the price is still relatively higher than last year.

The garlic season reaches its peak during Christmas and the Chinese New Year. The demand for Chinese garlic is high now and that also causes prices to rise. Since there is now also a greater supply on the Latin American market, Chinese companies are focusing more on the European, Asian and African markets, as well as on the Middle East.

Mexico: Good season with great prizes
Garlic is grown across all parts of Mexico. The harvest period differs per region. The total season runs from March to July and the main varieties are purple garlic, white garlic, Chinese purple garlic and the early California garlic. The weather conditions were good this year and the harvest started on time. Compared to previous years, Mexico has had a very good campaign, with good prices on both the domestic market and the export market, mostly because there has been no market saturation. The quality has been better than usual and the volumes have also increased. On average, the yield stood at around 14,000 kilos per hectare. Garlic is grown on around 6,500 hectares throughout Mexico. The state of Zacatecas, which has ​​3,000 hectares devoted to Chinese purple garlic, supplies the largest volumes. The biggest competitors for Mexico are China, Spain and the US.

Peru: Shortage of large sizes and opportunities in the US
The Peruvian garlic season runs from October to January. The harvest started on time this year and went well. Most garlic is harvested in November. In terms of volume, it was a normal season, but sizes have turned out to be smaller than usual this year, a trader says. “There is a shortage of large sizes. Markets such as Australia and New York demand large sizes, and it has been difficult to deliver them. There seems to be no specific reason for the smaller sizes. Maybe the seeds were not as good as in previous years. It is not a consequence of the weather conditions, which have been good this year.”

Due to the high import duties on Chinese garlic, the US is now more open to other suppliers. “Exports to the US are increasing, but not to an overwhelming level for Peru. The US market mainly demands white garlic and this comes mainly from China, Argentina and Spain. Countries such as Peru, Egypt and Mexico mainly supply purple garlic, which doesn’t yield much in the US.”

United States: Major impact of import rate on Chinese garlic
In May, after the import tariff on Chinese garlic increased from 10% to 25%, things started slightly changing on the North American garlic market. The demand for Californian garlic is huge. “Every week, the demand is 10-20% higher than in the same week last year,” says a trader. “The demand has been on the rise since July. At first, it was 4-6% higher compared to last year, but in September and October this percentage rose quickly.” The market is expected to be tight in early 2020. In the US, there is an increasing demand for organic garlic.

Argentina has just started shipping garlic to the US. It is said that the harvest there is 30% lower than last year. Meanwhile, Spain is also shipping garlic from its cold storage facilities. The question is whether the country will be able to continue supplying garlic until the start of the new harvest in May 2020. Traders hope so, because California does not have enough volumes to supply the entire country. Peru and Chile are also exporting small volumes to the US.

Due to the high demand for garlic, prices are good. A trader expects even further increases in this coming quarter. Prices for fresh imported garlic oscillate between $ 40 and $ 50.

Australia: Production sharply increasing
Australia is only a small garlic producer. In the season that finished in June 2018, a total volume of 2,246 tons worth $ 15.6 million had been harvested. 90% of this was sold on the fresh market, another 5% went to the industry and 5% was exported. The production is growing. This time, the volume was 26% higher than in the previous year.