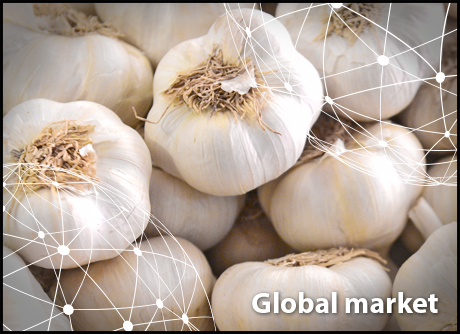 There is currently a surplus of garlic on the world market. In Spain, the harvest has been good for a few years in a row, and a new one will start in May. In China, the price of garlic has risen against everyone’s expectations as a result of price speculation. The high price of garlic persists and that doesn’t make Chinese garlic attractive for export.

The European market is mainly awaiting the new harvest from China and Spain. The market in Germany is currently stable. Meanwhile, North America is having to deal with low garlic prices, as there are too many suppliers on the market. In South Africa, measures have been taken against Chinese imports by levying additional import duties on this product. This follows an investigation into the illegal import of garlic from China to South Africa.

China: High price due to speculation, but little market demand
A lot has happened on the Chinese garlic market in the last few weeks. After the Chinese New Year in February, most people expected the garlic price to fall, but it actually went up. This went against everyone’s expectations, and the high price also persisted. The reason for this was that many people have been speculating with garlic prices. In May, the new Yunnan garlic is hitting the market and many people think the price will be high, because this year the fields have been reduced by around 10% and the supply will therefore be smaller. Other garlic production areas in Shandong will supply new garlic to the market in June and July.

A lot of garlic has consequently been bought in the last few weeks, so the price has risen. Now it is falling slightly, but still remains high. The quality of the garlic in cold storage is not always that good anymore; good quality garlic is therefore much more expensive. About 30% of last year’s production still has to be sold. The demand for garlic is currently not high, not even for export, mostly because the price is so high that Chinese garlic has become less attractive.

Spain
Within a few weeks, the new garlic season will be starting in the Spanish region of Andalusia. The acreage in this southern Spanish region has been reduced by 15 to 20% due to the poor prices of the last two seasons. The last season in particular was really bad, with a price drop of 30% compared to a year earlier.

In the meantime, the last stocks from Castile-La Mancha have almost run out. The season has been challenging due to the heavy rainfall recorded in May 2018, which caused damage to purple spring garlic and, to a lesser extent, to white spring garlic in La Mancha. This had an impact on quality, bringing prices sharply down and motivating growers to switch to purple garlic, whose price has been between € 0.30 and € 0.40 higher than that of white garlic. As a result, the market was again forced to reduce the price of purple garlic, given the increase in the supply.

The Netherlands: Opacity of garlic market
The current garlic market in the Netherlands is said to be opaque by importers. The market in Europe is pretty good, but the Chinese want to push prices up while large stocks of the previous season’s harvest are still available. The new Chinese harvest is expected within three weeks, and therefore, everyone’s trying to predict what the market will do. The growth prospects are good, although it was previously announced that the garlic harvest will be about 30% smaller than last season’s. Sales are normal, according to importers. The high prices, oscillating between 19 and 22 Euro, do ensure that the trade is in the hands of the regular importers, and that occasional importers are staying away from the Chinese garlic.

Germany: Stable market
The German garlic market is currently largely stable. The bulk of the goods come from China: Importers say that the Spanish varieties are hardly accepted by the often conservative consumer. There is a good demand for the standard white garlic all year round, especially in the retail. Attempts to introduce, for example, black garlic on the market have had little success as yet. The availability of the product is also adequate at this time. Only in the summer (June / July) do the volumes fall somewhat.

In Germany, but also in Switzerland, partly due to climate change, garlic is being grown on a larger scale. The harvest generally starts here around late May / early June. Frozen products and processed garlic also have a presence on the market; this segment, however, is significantly smaller in terms of demand when compared to the fresh market. Organic garlic also remains a rare product.

Italy: Waiting for a new harvest
The demand for garlic is currently not very high. “There is hardly any demand because people are waiting for the new harvest. The price for Chinese garlic is fairly stable. The price for garlic from Spain is moderate. In Spain, they are also currently waiting for the new harvest, which will start in early May. The Chinese market is currently in a speculative phase. Prices here are not in proportion to the market reality in Europe, North America, and Latin America,” said a trader.

There is currently new garlic from Egypt and Mexico on the market. “Fresh green garlic remains a niche product with limited sales, because it is linked to the spring season.”

With regard to specialties, such as black and wild garlic, the trader sees them as relevant in the market, but only because of the novelty. “The possibility of them becoming mass products has been ruled out; however, we do see that some consumers are curious about them and appreciate these products.”

South Africa: Surplus brings price of local production down
The South African garlic market is highly dependent on imports, especially from Spain and China. The imported garlic is currently more expensive than the local product. The price of the imported garlic ranges between 45 ZAR (€ 2.80) and 55 ZAR (€ 3.40) per kilo. For its part, locally grown garlic costs between 30 ZAR (€ 1.86) and 35 ZAR (€ 2.10) per kilo.

The price for local garlic is under heavy pressure. According to the growers, this is because there is too much garlic on the global market, mainly due to the good Spanish harvest. The South African garlic harvest has passed its peak and will be again in full swing in the spring.

Last year, there was an investigation in South Africa into the smuggling of garlic from China. Three new importers were caught. Imports upset the South African market and that is why the government has taken measures. Extra rates are set on garlic from China on top of the normal import duties. It is also said that people sometimes pay up to 80 ZAR (€ 5) for Chinese garlic.

North America: Large supply pushes prices down
At the moment, a lot of garlic is imported into the US market and that keeps pushing prices down. “There is a huge amount of Chinese and Spanish garlic available at the moment,” says Juan Pablo Lozano, of Garland LLC, in Miami. “Spain has had a good harvest; they have had good returns for the last five years and I think they are going after China in terms of production.” He adds that the Spanish production is also expanding from fresh garlic to, for example, peeled garlic.

In the meantime, China has also increased its exports to the United States. Lozano suspects that the increase in imports has to do with future anti-dumping measures by the federal government. “There are just too many players on the market right now,” Lozano says.

“The demand for garlic is currently good, but there is also oversupply at the moment. That is causing garlic prices to drop,” says Lozano.

The conditions of the garlic market in the United States were significantly better last year. Prices have almost halved. “Market prices fell in the beginning, then they rose a little, and now they are falling sharply again.”

If the prices for garlic don’t fall further, Lozano predicts that they will remain stable. “At the end of May and in early June, garlic arrives again from Spain and Mexico, and China also resumes its production. All while there are still stocks from the previous year.”

Latin America: Small stocks
Spain is in danger of losing the Brazilian market due to a proposed 19% import tax on garlic from Europe. The South American market is important for Spain and this tax would make it difficult to compete with Chinese garlic imports; however, the price of Chinese garlic is currently rising quickly, which is good news for Spanish exporters.

The Argentinian garlic market is currently packing its products for export. Peru, normally a producer that exports garlic all year round, currently has small stocks.