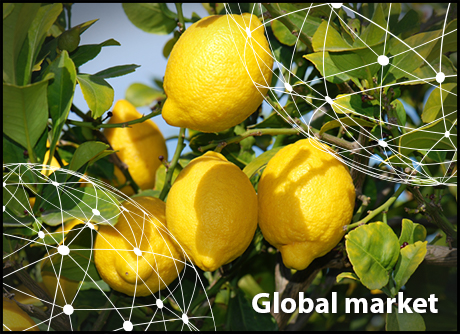 Lemon supplies are currently on the rise in most countries. Lemons are an inelastic product. This means this year’s demand is fairly similar to that of last year. Lemon prices have dropped significantly because of this.

Argentina is, currently, the most distinctive lemon production country. This country has increased its exports to both the United States and Europe. This increased volume is putting pressure on the Spanish lemons that are on the market. Russia is currently importing lemons from China.

The Netherlands: Argentinian lemons arrival delayed, enough Spanish Verna lemons
Dutch importers say the Argentinians have started loading the first shipments of their lemons this week. The first arrivals are expected in mid-June. The Argentinian season was considerably delayed. This was due to the persistent rain in the Tucuman region. There were also local strikes.

The rain and harvesting delays mean this year’s fruit is larger than usual. Argentina will probably send more lemons to the US this year. Fewer are expected to go to Europe. This year, there are enough Verna lemons from Spain. This ample supply is expected to keep the prices under pressure.

Germany: Spain dominates supply
Spain is currently calling the shots regarding lemons in Germany. The entire German wholesale sector sells this Spanish product. Sales are satisfactory at the moment.

In general, pricing has also remained relatively stable in recent weeks. It is only in the city of Cologne that prices shot up last week. In contrast, prices in Hamburg were adjusted slightly downward.

Argentinian and Italian Amalfi lemons are also popping up here and there in the wholesale supply. According to a supplier, if temperatures rise in the coming weeks, an increase in sales is expected. This rise in sales will be mainly in the hospitality, restaurant, and catering industry.

France expects a stable market this summer
A trader at Rungis, the wholesale market in Paris, expects the lemon market to be stable this summer. “We expect a continuous supply from Spain throughout the summer. Chilean, Argentinian, and South African products supplement these volumes. There are more lemons available. For this reason, we can maintain more competitive prices.”

At the moment, the new Spanish harvest has just come onto the market. Traders are now waiting on Argentina. According to this trader, demand is satisfactory. “The demand for lemons will, however, never become huge. It remains, above all else, a seasoning.”

Italy: Primofiore rather than Bianchetto
There will be a shortage of Italian lemons this summer. It will, therefore, also be a slow season for those looking for exclusive Italian products. At the moment, many traders are getting their lemons from Latin America and South Africa. Citrus is currently being affected by black spot disease. It is still unclear what consequences this will have for the lemon trade.

Growers in Eastern Sicily are dealing with a different disease at the moment. There have been unfavorable climate changes in the region. Low temperatures and strong winds have hit the area. As a result, the ‘Mal Secco’ fungal disease has affected the lemon harvest.

At present, demand, as well as the lemon price of €0,55/kg, are still high. However, the Italian Primofiore does not store well. As a result, many of these lemons rot after a short time in storage. The Bianchetto variety is less popular as it is less weather-resistant. A small volume of Verdello lemons is still also expected.

However, the transportation of fresh products between these two countries has not yet been adjusted to the correct conditions. Spain is also investigating the possibility of exporting its lemons to Japan and Vietnam. This depends on whether the transport conditions will be favorable in these countries in the future.

Spanish growers harvested more Vernas this year than in previous years. Thanks to the weather, the quality of these lemons is also better than in the past.

China: exports to the regions
The Chinese lemon season runs from October to December. Most of the lemons are harvested then. They are then cold stored. This means there are lemons on the market for most of the year. Current prices are not very high. They are, however, also not lower than this time last year.

Lemon prices in this country are expected to climb in the coming month. China also exports a lot of lemons. These exports have even increased this year. Export destinations include countries such as Russia, Indonesia, Kazakhstan, and Singapore. The Meyer variety is important for the Chinese market; while the Eureka variety is usually chosen for exports.

Uruguay: shipping route from South America to the US
A new shipping route has been opened between Uruguay and the United States. Products including lemons and other citrus are transported to the US from Uruguay. When it comes to lemons, the United States is Uruguay’s most important export market. Chile can also export goods via this new route. Products from this country are sent to the East Coast of the US.

Argentina: floods delay harvest
It is the second year that this South American country is exporting lemons to the United States. Argentinian lemon exports to the US are estimated at 20,000 to 30,000 tons. This, therefore, means it has grown by more than 300% compared to last year.

However, most regions in Argentina experienced a lot of rain. This constant rain moved the harvest back to the end of June at the earliest. The Salta District is in the extreme north-west of the country. There, the weather conditions were less severe, and the lemons’ quality is good.

The United States: low prices for good quality
The lemon harvest volume in California rose sharply compared to last year. This is mainly thanks to the favorable weather conditions in that region. It is not only the volumes that are large; the lemons, themselves, are too. Harvests in a few areas in California are currently overlapping. This overlap is making for a plentiful supply of lemons on the market.

“The demand for lemons is at the same level as last year. This, while the supply has increased by 10 to 20%. This product also has an inelastic demand. When there is a large supply, there is no option other than to lower prices,” says a trader in that country.

“These low prices also define the season. This situation will not change any time soon. These low lemon prices are also not normal for this time of year. The prices for the smaller sizes are starting to rise again. However, the prices for the large sizes remain low.” Imports keep arriving from, mainly South America, too.

South Africa: higher production
Citrus farming has increased in South Africa. Because of this, there has been a downward trend. Income from lemons has risen by two-thirds over the past six years. But, the price of this product is falling. This is due to the increased lemon cultivation in the country.

According to the Citrus Growers’ Association, this trend has halved the export value of lemons. Total production has more than doubled, coming to 473,000 tons last year. A large part of new orchards are, however, not yet in production. More trees are also still being planted .