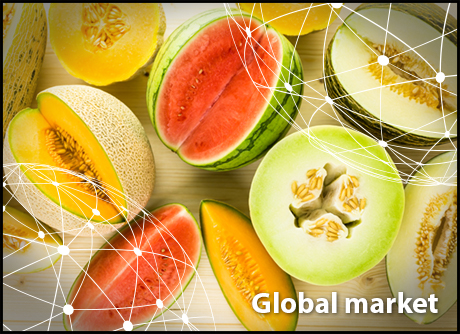 The European summer has had a false start. The weather in May and June has generally been gray, and if there is one product that suffers from gray, rainy summers, it is the watermelons. Compared to last year, conditions are tough in the watermelon market. The production on the European market currently comes from the Spanish region of Almería. There is also production from Morocco and Italy. Greece is slowly starting up, as is the Spanish region of Murcia. China grows melons for its own market and the fruit in the United States comes both from domestic growers (California and Oregon) and from Mexico. The Brazilian production will arrive later in the summer. When the production from the other markets arrives, prices will fall due to the greater supply.

The Netherlands: Weather too unstable for watermelon sales
“Every extra degree entails better watermelon sales,” says a Dutch melon importer. Compared to last year’s high temperatures, this year’s weather is more unstable. The price of watermelons has showed a downward trend, while those of other melon varieties are actually pretty decent. Currently, the watermelon supply comes mostly from Almeria, which is where the latest shipments have come from. There is also fruit available from Morocco and Italy, and Greece is about to start. The early harvest in Murcia was smaller due to the unusual rainfall in April. In the case of the Galia melons, companies report a 30-35% smaller harvest; the Cantaloupe volume is down by 25%, and watermelons and yellow melons have recorded a 5-10% drop. At the same time, the sale of mini watermelons continues to increase rapidly in the Netherlands. Looking ahead to the Brazilian season, a Dutch importer has already said that large volumes can be expected.

Belgium: Supply and demand in balance due to weather conditions
The melon season in the Spanish region of Almeria is gradually coming to an end and the region of Murcia is slowly starting to take over. “Almeria’s season has not been that easy,” says a Belgian trader. “In recent weeks, there has been an abundance of small-sized Galias on the market. The supply of the popular sizes 5 and 6 has been scarce in recent times. Since the melons from Almeria are the first melons, their quality and taste are not as good as those of the melons from Murcia. Chipiona is an emerging region for early Galia melons, and in terms of taste and size, these are a lot better than the Galias from Almeria. According to the Belgian trader, the demand for Galia melons is declining slightly every year. “The Charentais, yellow and green melons, on the other hand, are doing better every year. In the past, the Galia melon was by far the most popular melon, but since the quality of the early Galia melons has declined, their popularity has also fallen. The same applies to watermelons. There are still watermelons from Almeria on the market, but the first volumes from the Palomares region are on their way. The Greek watermelon season is also starting, although it has been delayed by about a week or two. Actually, the more unstable weather means that the demand is also lower, so the supply and the demand are in good balance.”

Germany: Sales improving steadily
In Germany, melon sales have increased noticeably due to the higher temperatures, especially in the south. The Spanish watermelons have faced competition here and there from the Italian and Moroccan products, with Morocco generally being slightly cheaper than the other origins. The average price per kilo currently stands at around € 0.80 to € 1.20 / kg, with seedless Spanish melons achieving the best sales, as reported by wholesalers.

Besides the watermelons, Galia and honeydew melons are also in great demand in the wholesale trade. According to a trader, these varieties are mainly imported from Spain. Also, due to the considerable share of Turkish companies in the German market, there is a high demand for the varieties that are grown and exported there. Halfway through May, for example, the first Kirkagac melons were already imported from Turkey.

Italy: Quality of melons is excellent
As long as the weather remains favorable, the prospects are good for the melons and watermelons. The Sicilian season has started with a good demand, both in Italy and abroad. The production from Lazio and Campania is also available. The medium to high prices paid for yellow melons are justified by the fruit’s high quality and great appearance. The watermelon season is starting in a few regions; however, in others, like Calabria, the harvest has been delayed by 15 to 20 days.

Sicily’s yellow melon season started around 15-20 May with limited volumes. The yield per hectare is stable compared to last year and the prices paid at origin are currently excellent, reaching € 0.60 / kg. The competition comes mainly from Italy itself, from the regions of Puglia and Calabria. At the end of June / early July, prices are expected to fall with the arrival of larger volumes. Compared to the Spanish melons, the Italian melons are on average 20-25% more expensive. Prices for the Cantaloupe are now rising due to a shortage of Spanish fruit.

These days, there has been an on-going transition in melon cultivation in northern Italy from the greenhouses to the open ground. The yield of the Honeymoon smooth melon in the province of Ferrara is very low due to the weather conditions in May. The quality of the melons is good, as well as the prices (1.50 to 2 € / kg). The harvest has also started in Sardinia. The quality of the melons is good and the Brix amounts to around 16-17 degrees, while that of the watermelons stands at around 13-14 degrees.

Spain: Transition from Almería to Murcia
The season in Almería, the region that starts earliest in Spain, is as good as over. Growers are now switching from greenhouse watermelons to those produced in the open ground in Murcia. This transition will also happen soon for the other melons. The season in Spain has so far been difficult due to the cold weather recorded in the main markets for the Spanish product. As a result, the demand has been below average. According to Spanish growers, the prices paid for the crops in Almeria are the lowest in four years. However, the acreage devoted to ​​watermelons in Spain continues to grow. For other melons, the acreage either remains stable or is actually being reduced.

China: Growing supply of melons
The watermelon season has already started in China. Large volumes have been hitting the shelves since the beginning of June. In addition to watermelons, there are also many other types of melons on the market. Sweet melons are especially popular in China. Since there is now a lot of supply on the market at the same time, prices have also fallen. They will continue to drop in the coming months of July and August, as the supply on the market will only increase. However, special varieties could still be sold for somewhat higher and more stable prices, as the supply of those special melons is generally smaller and their quality is high.

Melon growing areas can be found all over China, and not all melons are grown in the open ground. They are often also cultivated in greenhouses. This makes it possible to grow melons in China all year round. However, the peak in the supply is reached in the summer months, when the demand for melons is also at its highest. This year, there was a lot of rain in the months of February and March; as a result, the season started somewhat later in some growing areas, such as Jiangsu and Anhui.

United States: The demand for watermelons is on the rise again
The supply of both domestic and imported watermelons in North America is good at the moment. “There are good stocks of watermelons from Mexico and California. Mexico continues to ship melons to the US, having done so for longer than expected. The season in California will last until August and then the campaign will start in Oregon,” says a Los Angeles-based trader.

The volume of melons is comparable to that of the same period last year. “We are harvesting later, but the volume is the same.”

The demand for watermelons has been lagging behind somewhat, although that is gradually changing. “The demand has remained stable, but there has been a large supply due to the import of Mexican watermelons. Also, the weather hasn’t been that hot, so the watermelon market has gone through a depression.”

The price for conventional melons has so far been described as fair. “The prices are lower than those recorded around this same time last year. I feel that the market is getting stronger, especially given that the Mexican production is running out and there is less fruit on the market. I think the market conditions will definitely improve by July 4 (Independence Day) and hopefully the market will stay strong after that.”

Australia: Melon exports up by 5%
Australian melon exports increased by 5% in 2018 compared to last year. The value of those melons has remained the same. The sector made a number of visits to major export markets, including Japan, Malaysia and Singapore. Australia’s total melon production, however, has dropped by 7% to 215,519 tons, and the total value is down by 28%.

For watermelons, there has been a 4% increase in the acreage, but with a price drop of 22%. Few melons are imported into Australia.