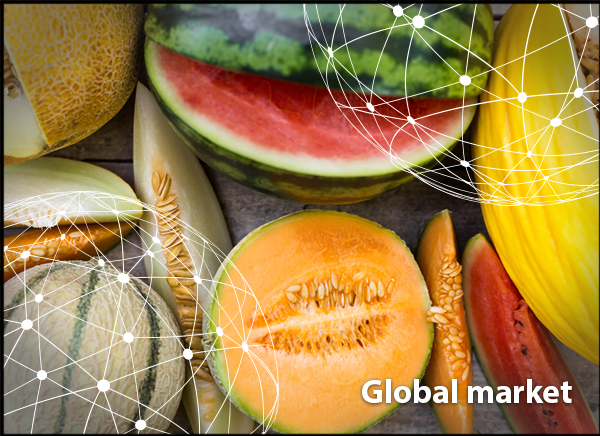 The situation in the melon market currently depends on the variety. There are enough Cantaloupe melons available in North America and Europe, but little demand for them. Meanwhile, the demand for watermelons is also low, but there are nevertheless shortages on the market because the volumes are very limited due to the weather conditions in the production countries. Traders don’t expect this to change soon. Costa Rica is mostly the one dealing with shortages, but the volume in Guatemala has also been picking up slowly in the first month and a half of the season. Morocco and Senegal are also currently on the market in Europe. The prospects for the Italian season at the end of March are currently positive.

Germany: Difficult season due to storms and protests
As has been the case with other overseas products, the stormy weather in combination with the protests in various ports in recent weeks has had an impact on trade. This has often caused considerable delays. Galia melons and watermelons are in great demand, partly due to the warm weather of recent weeks. There are therefore hopes for a successful end to the overseas melon season.

Switzerland: Limited demand and supply
In Switzerland, melons currently play a limited role in the market. Only small batches of Galia and Charentais melons are available, mainly from Brazil, Costa Rica and Honduras. The price is acceptable, in line with the limited demand, and almost at the same level as last year’s. “In contrast to last year, we now have Galia melons, mainly from Brazil. This is a direct result of the investments in new plantations and new varieties in Brazil,” says an importer.

France: There is mostly demand for quality
There are melons from many different origins on the Rungis wholesale market sold for very different prices. The green Charentais melon from Morocco (650 – 800 grams) is sold for € 2.40 per kilo, while Senegalese melons (950 – 1150 grams) cost between € 2.60 and € 3.00 per kilo. In general, the demand for melons is low in winter and there is only room on the market for good quality melons. This has a direct impact on the supply.

Italy: Season to probably start 10 days earlier this year
At the moment, the melons in Italy come from Morocco and some other countries. A trader from Northern Italy is satisfied with the quality of this Cantaloupe, partly due to the high Brix. The price at the moment stands at around € 3.00 / kg.

In Sicily, there are good prospects for the harvest due to the high temperatures and the sunshine. This has facilitated the early cultivation of Cantaloupe melons under tunnels and in greenhouses. The first melons are expected around 20 March in Licata, Agrigento. Other varieties will follow later, all arriving around 10 days earlier than normal. In May, the watermelons from Marsala and Pachina will follow, and the yellow melons from Marsala and Licata will arrive around May 15. The New Delhi virus that spread in Sicily has done little damage this year. There is uncertainty about the availability of water for open ground cultivation and the impact of the Coronavirus in Europe.

“The planting of melons and watermelons has been on-going since December,” says an Italian organization of growers which is investing on melon cultivation in 2020. “The first melons could be harvested in mid-April. The mild weather has accelerated the vegetative development and that is giving all varieties a boost.”

The Netherlands: Watermelons and Galia in short supply; selling Cantaloupe and yellow melons is challenging
There is currently a dichotomy on the melon market. “Watermelons and Galias are in short supply, but the sale of Cantaloupe and yellow melons is a bit more challenging,” says a Dutch importer. He expects this situation to continue for a while. “My impression is that there are many more melons on the way. Costa Rica currently has too small a volume to meet the demand, and the Panamanian season has not yet started. Therefore, seedless watermelons currently cost between 1.20 and 1.30 Euro, and the Quetzali are a little cheaper. Galia melons are sold for between 9 and 10 Euro. The price of Cantaloupe melons is considerably lower, with market prices of between 5 and 6 Euro. The yellow melons are sold for 8-8.50 Euro, while they should actually cost 10. The reason is that Brazil is still shipping and the first containers from Costa Rica were hampered by some quality issues. In addition, the delays in recent weeks, partly due to the various storms, have also taken a toll on trade.

Guatemala: Supply on the rise again due to warm and dry weather
This Central American country is mostly devoted to the cultivation of Cantaloupe and honey melons, mainly for the US market. The season started slowly and also later. In the first month and a half, the volumes were therefore lower than usual due to the cold weather. The volumes available have recently increased again. The weather has been dry and warm, which is good for melon cultivation. The quality of the fruit is good, with a high Brix. There are good stocks of calibers 9 and higher.

Mexico: Tropical storm puts an end to watermelon season in the north
The weather conditions at the start of the season had an impact on the melon harvest in Mexico. In the north, the season ended in December, while other regions started delivering their productions in January. Regarding watermelons, the season in the north finished sooner than normal due to the impact of the tropical storm Lorena. Honey melons were still available, but with a smaller volume, causing shortages in the United States.

China: Substantial import decline due to the Coronavirus
It is currently quiet on the Chinese melon market. In China, there are only a few areas able to produce out of season, such as Yunnan and Hainan. Currently, most melons come from Hainan, and since there is not much supply, the price is somewhat higher than normal. The melon season in other production areas will kick off in May. Most of the supply will then hit the market, which will again lead to price falls.

Around this time, there are usually a lot of imports from Myanmar, but due to the current Coronavirus crisis, imports have dropped considerably. Less trade is currently allowed at the border between Myanmar and China in order to prevent the virus from spreading further.

South Africa: Finally rainfall in Limpopo
There are two major production regions in South Africa: the Eastern Cape and Limpopo. In Limpopo, there are a number of large melon growers in the far north of the province, on the border with Zimbabwe. However, the last four years have been extremely dry; even the rivers have dried up. In the last two weeks, a grower there was forced to discard a huge amount of melons due to the consistent pressure from insects and diseases.

Nevertheless, this grower is willing to have this loss in exchange for the rainfall that has been recorded. Better yields, larger sizes and better quality are now expected for the new season. Many growers who had previously stopped due to the extreme drought are now planting melons and other crops. Yet a grower also sees the disadvantages of rainfall. “The rain and melons don’t go well with one another. The increased moisture can lead to the appearance of other diseases.”

United States: Shortage of watermelons, but enough Cantaloupe
The supply of melons on the North American market is currently tight to average. The watermelon market is very tight due to the weather conditions in Mexico. The shortages have been driving prices up in the last month and a half, and things are expected to get worse, as a number of regions in Mexico are stopping, with the consequent gap in the season. The demand for watermelons is normally low around this time of the year, but there is an even greater shortage. Watermelon prices amount to around 0.36 $ / carton and no price increase is expected. Only when the volumes pick up again can the price drop to $ 0.20 / carton.

The prices and stocks of honey melons from Mexico are more reasonable. The price is slightly higher than last week, but people do not expect a gap in the supply because these melons are easier to keep in stock than watermelons. The price now fluctuates between 8 and 10 $ / carton. For the Cantaloupe, there are clearly no shortages in the market and imports come from Honduras and Guatemala. However, the demand is limited. Due to the stable supply of the Cantaloupe, prices have fallen by 0.25 to 0.50 $ in the last week. Not much of an improvement is expected with the arrival of melons from the second harvest cycle in Central America.

Canada: Limited stocks, but also limited demand for watermelons
Watermelon prices stand at the same level as last year. Both the demand and supply are low. A trader expects the market to remain slow. Still, there is hope for later in the year, because Florida is likely to hit the market earlier and the yields per hectare are looking good. The season is expected to start here in the first week of April.

Australia: New Zealand closes market to Australian melons from Queensland
With the discovery of the Cucumber Greening Mottle Mosaic Virus (CGMMV) in watermelons from the Australian state of Queensland, New Zealand has closed its borders to products from this region, which is normally a “CGMMV-free zone” (suspended after the discovery). This has been done despite the fact that 97% of the import watermelons in New Zealand come from this region. At present, no restrictions have yet been imposed on the melons from New South Wales and Victoria, but controls are planned to be enforced for both regions.

In any case, the consumption of melons has decreased due to the listeria outbreak at the start of 2018. 43% of buyers only buy watermelons.