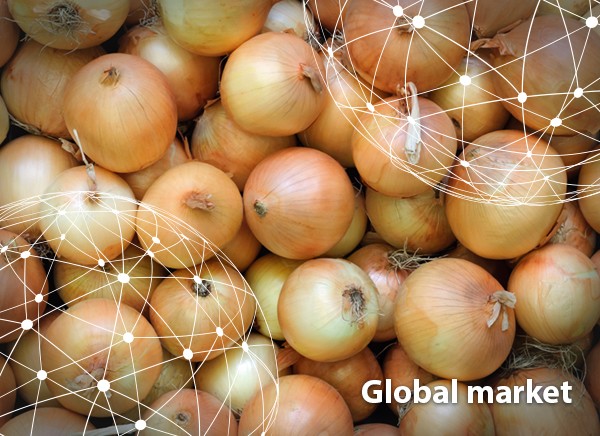 In mid-September, India imposed an export ban on its onions, which immediately resulted in a higher demand for Dutch, Spanish, Egyptian, Turkish and Chinese onions in Asia and the Middle East. This was especially good news for the Netherlands, as it could prevent the oversupply of red onions this year. Furthermore, the new harvest in Europe and the northwestern states of the US is characterized by the lack of thick sizes, which is creating opportunities for other production countries, such as Italy, which has seen a rise in foreign demand this year. Furthermore, onion exports in Australia and New Zealand have increased and the season in Peru started 3 weeks earlier.

The Netherlands: Opportunities for Dutch exporters after ban on Indian exports
The Netherlands has again had an unusual growing season with an extremely dry spring, which has resulted in poor results. There eventually came some rain, otherwise the yields would have been disastrous. Still, these have been affected and there are growing quality issues. According to exporters, the impact of the coronavirus is mainly reflected in problems with payment transactions, although Dutch exporters do see opportunities on the world market this season. At the moment, the demand for Dutch onions mainly comes from two places: West Africa and the Far East. West Africa is now flooded with Dutch onions, although the unexpected halt of exports imposed by India has led to increased demand from Asia. Last year, India already acted unpredictably and that seems to be happening again this time. By the way, exporters say that this increase in the demand is also desperately needed, because the expansion of the red onion acreage would otherwise result in oversupply. In any case, warnings have been issued against speculators, as they may be trying to get advantage once again.

The acreage is expanding at a quick pace, especially in the North German Lower Saxony. “Every year, a number of producers choose to start growing onions because of financial reasons. As long as onion prices remain on the high side in the coming years, this trend will continue,” they say.

United Kingdom: Despite weather conditions, the season is going relatively well
2020 will go down as a year with a challenging growing season for onions, with one of the wettest winters followed by a very warm and dry spring. Temperatures in June and July soared to record highs, making the onion production less homogeneous. Fortunately, the weather was generally been good during the harvest, and now that most of the production has been harvested, the quality and yield are perceived to be positive. The British onion season is therefore going relatively well. There are some concerns about the consequences of the high soil temperature, especially when it comes to the appearance of fusarium and pink root, which are closely monitored during the storage period.

Due to the coronavirus, there was an incredibly high demand for onions in the spring. However, sales rebounded to a more stable level in May and June. It now remains to be seen what restrictions will follow in the winter months in order to contain the virus and what kind of an impact this will have on the price of onions on the British market.

France: Good yield, but market concerns
This year, the harvest in France is good in terms of both volume and quality. French growers are also satisfied with the sizes and weather conditions during the harvest; however, there are some concerns regarding sales, especially to the hotel and catering industry, which are currently limited.

Austria: Moderate harvest in 2020
Due to the heat, the harvest of the Austrian onions is already coming to an end. In some parts of the country, the production is about 20% below average. Both the domestic demand and exports remain stable. Prices amount to around 0.12 to 0.15 € / kg.

“At the European level, the onion acreage is more or less the same as the average of previous years. The market in Italy is not experiencing a strong push, although there is more demand from abroad,” says an operator from Northern Italy. “High quality Italian onions are in high demand in France, Belgium, Germany and the Netherlands, a sign of the lack of premium products in the rest of Europe. There is limited competition from Spain, so European operators are increasingly turning to Italian producers.”

A Campania operator says that, as predicted at the start of the season, the domestic market is very sluggish, as the supply is not in balance with the demand. “There are huge volumes of unsold products available due to the low demand in the domestic market and many wholesalers are complaining about the disappointing trend in the trade. Prices are not encouraging either; the price is down 30% compared to last year.”

Spain: Onion harvest about 40% lower than last year
The acreage devoted to ​​Spanish onions has been reduced by 14% this year. Due to the heat waves in the main growing areas, sizes have generally been quite small. Normally, 30% of the Spanish production consists of large sizes, but this year the share is no higher than 10%. As a result, the production volume is approximately 40% lower than last year.

The market therefore needs onions and the demand has increased significantly, as have prices for growers and traders alike. A considerable shortage of large calibers is expected, which will cause prices to rise. The catering sector is recovering somewhat since the schools reopened after the summer holidays and that is allowing the demand in Spain to increase again. Also worthy of note is India’s ban on the export of its onions, which has increased the demand for the Spanish ones (red and white) in the Middle East and Asia, but especially in Europe, because Dutch exporters are shipping large quantities to markets outside Europe.

India: Export ban at least until November
After prices in the domestic market started to rise significantly, the GOI decided to intervene and imposed an export ban on onions in order to slow down the price increase for consumers. This is the second year in a row that the Indian government has taken this step. The decision was made after a disappointing harvest in Bangalore due to heavy rainfall, which has put a lot of pressure on the harvest in Nashik. The further continuation of the export ban will be decided in November. Everything will depend on the production volume in Kharif. If it isn’t good, the export ban will probably remain in place.

China: Price continues to rise
The export price of onions has risen sharply in recent weeks. There are several reasons for this. First of all, the lockdown due to the coronavirus was lifted some time ago and the demand from the catering industry is starting to increase. At the same time, the logistics processes in the ports have gone back to normal, which means that exports are running smoothly. Moreover, people are actively buying onions of the new season, which are now on the market. Given these three factors, market prices have continued to rise.

This month, India announced a ban on onion exports. Once the ban came into effect, importers from all over Southeast and South Asia turned their eyes to China. In the short term, the market demand has risen sharply and the demand for onions has become greater than the supply, which has led to price increases. The rise in the demand in overseas markets has also had some impact on domestic sales. Currently, the price of onions on the domestic market is also increasing.

United States: Production costs increase for growers in Northwest
The supply of domestic onions is slowly getting underway now that the season is starting in new production areas. The harvest started earlier this year in Washington, Idaho and Oregon, while there are still supplies coming from Utah, Colorado and Michigan. The supply looks normal, but with few large sizes from the northwest. More batches in this size range are expected in two weeks. The demand from the retail is still particularly strong, especially for the smaller sizes. Further down the line, a lot will depend on the opening of schools as the lockdown in the US is lifted.

This year, however, growers also have to contend with some challenges. For example, the smoke from the California wildfires is taking a toll on the crop’s development and delaying the harvest by 7 to 10 days in some places. Also, the sector is dealing with a lack of workers, as well as a shortage of trucks, given the closure of a large transport company. This is driving logistics prices up, and packaging lines have to be planned on time. Still, prices remain stable, with some below the break-even point, as is the case for the jumbo yellow onions.

Peru: Early start of new season, opportunities on the US market
The Peruvian onion season started in June, three weeks earlier than usual. The campaign is not expected to end any earlier, but will actually continue until January, which is normal. Overall, the market demand has increased as a result of the pandemic. The batches shipped so far this season are arriving on schedule. In general, the Peruvian supply is expected to remain stable this season, and this, in combination with an increase in the demand, will put a lot of pressure on the market. Prices are higher than normal. A bit of a shortage is expected around week 40, as there was a labor shortage due to the pandemic at the beginning of the season and fewer onions were planted. These onions will be ready to be harvested in about two to three weeks, and the volumes will be smaller. Volumes should be back to normal after a few weeks. The US season came to a close a bit earlier than usual for Vidalia and Walla Walla onions and this created a great opportunity for Peru to enter the US market. Peru currently exports its onions to about 17 ports around the world.

Australia: Significant increase in exports
The Australian onion production increased by 4% in the 2018-2019 season, reaching 258,195 tons, and the value grew by 16% to AUD 191.2 million (EUR 115.9 million). Exports increased significantly to 47,490 tons (+56%), with an 81% rise in the value. Fresh exports accounted for 18% of the total production, while 7% went to processing and the remaining 75% to fresh supply. Yellow onions accounted for 79% of the total volume, red onions for 19%, white onions for 1% and shallots/spring onions for less than 1%. 4,983 tons of onions were imported into Australia, most of them from China.