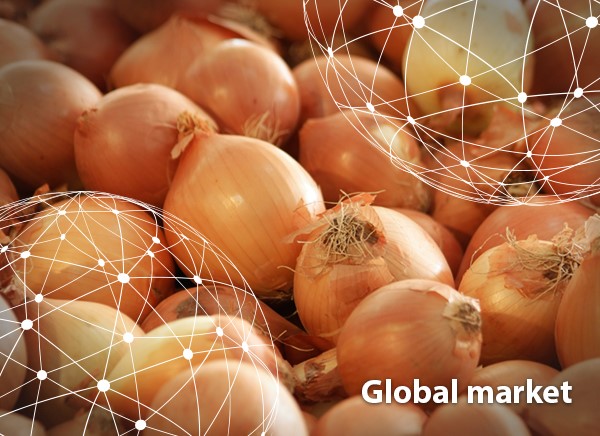 The global onion market is stable at the moment. Last year’s harvest was good in Europe and North America, but disappointing in India and China. This resulted in a new export ban on Indian onions until January 1 and on China’s shipments falling significantly because of reduced planting and bad weather. There was a shift in the demand from large sizes, mainly demanded by the food service, to the small and medium sizes that are usually demanded by retailers. This often prevented a small supply of large onions from being sold at high prices.

The Netherlands: Not all onions are suitable for export to distant destinations
After a busy period in the first half of the season, things are again quiet for Dutch onion traders. The prices at origin are at a similar level to the bale prices, and it is very quiet for the packers. Also, in January and February, quite a few onions had to be sold for qualitative reasons. Insiders estimate that at least 30% of the current stock isn’t suitable for export to distant destinations. Considering the situation of exports, traders are confident in a revival of trade from March.

Germany: Good, stable sales
The German onion market is currently extremely stable, with good prices and ditto sales levels. During the Christmas period, onions are traditionally promoted and large volumes were also sold this season. Sales are more stable over the rest of the year, a trader reports. Prices currently range between 200 and 240 Euro per ton for sizes 40-70. It is hoped that last year’s harvest will last until May. “For the time being, storage onions are doing well, but the question is, of course, how the quality in storage will develop in the coming months.”

Austria: Stable demand
Domestic product sales are stable and satisfactory. The same goes for onion exports. The prices at origin haven’t changed and fluctuate around 12 to 15 Euro / 100 kg for clean, sorted goods.

France: Many large sizes, earlier demand from abroad
The situation in the French market is fairly normal at the moment. The season has been marked by an abundance of large-sized onions. This means that the price differences between large and small sizes are sometimes significant. The quality is good and, in general, prices have remained stable throughout the season. This year there was also earlier demand from other countries, such as Spain, with orders arriving in January, instead of February / March.

Spain: Lower supply of large sizes, but also less demand
The onion market in Spain is marked by stagnant demand and prices that do not reflect the low volumes available, as crop yields fell by more than 40% in 2020.

Exports have fallen sharply since the start of the corona crisis. Spanish onions stand out in the export markets with the large sizes, which are mainly intended for restaurants, hotels and the catering industry. Despite the clear decline in the supply, not much has changed due to the low demand, although the price has increased a little compared to the summer months. In a normal situation, without the coronavirus, the prices of large onions would now be very high, because they are quite scarce. Increased sales to the retail did not offset these losses.

Another obstacle that Spanish onions have faced is the strong competition from the Netherlands, especially with the medium sizes, which are more abundant in Spain this year. The Netherlands seems to have had a huge harvest. Dutch onions have flooded the markets and put pressure almost everywhere, despite the fact that India did not export. Countries in Africa and the Far East are well-supplied with Dutch onions. Normally, Spanish onions always find new markets, as has been the trend in recent years.

Although there aren’t yet accurate figures about the onion acreage for this year’s harvest, which starts in April in the earliest areas of Andalusia, the prospect is that there will be a slight decline. Also, there have been some small delays in the planting of early onions in some areas due to the passing of storm Filomena in early January. In September and October the weather was very dry and producers in Andalusia feared that they wouldn’t have enough water for their plantations. To this we must add the fact that, at the time of planting, the demand was not very good, and that the situation in this regard remains uncertain due to the impact of the pandemic.

Italy: Less sown for the upcoming season
In Northern Italy, the first onions are currently being sown for the next summer season; however, it seems that less than usual will be planted this year. The manager of a major seed company says there will be an average fall of 20%, with peaks of 50% in certain areas of Emilia-Romagna. A trader says that sales have been hurt by the lack of demand from the catering channel. It isn’t strange that the acreage is being reduced. A grower in Emilia-Romagna with about 80 hectares has reduced his acreage by 15% because the market conditions haven’t been good for the past 3 years. Onion prices have been low in recent days, ranging between 0.20 and 0.30 € / kg. In many cases, the selected products have a good quality.

A grower from Piedmont reports that the demand for onions is currently stable. “White onions have a more dynamic market, but in general, the demand is low. Red and golden onions have kept prices at average levels, and sales are more or less static. From October onwards we have been paying with interest what we had sold in the two months of high demand during the first lockdown.”

Sales have finished for a trader from Piedmont. The reality is there are still many volumes, especially of white onions, but these will remain unsold due to the difficult market conditions. For refrigerated goods stored and ready to be loaded, the last quoted prices were the following: 0.20-0.23 € / kg for white onions, 0.20-0.22 € / kg for yellow onions, 0.30 € / kg for red onions and € 0.35 / kg for copper-colored onions, a niche product on the Italian market.

South Africa: New harvest puts pressure on market prices
The average price on the South African market is around 3.84 ZAR (0.20 Euro) per kilo. The price is slightly down due to the incoming harvests from the provinces of Western Cape and Northern Cape. It is therefore expected that there will be sufficient stocks for the coming months. In the north of the country, there has been a lot of rainfall, which has given some relief to the irrigation systems set up by the growers. The demand for onions is good in the domestic market.

India: Exports rebounded after ban ended
India exported onions worth $ 198 million. Exports generated a total of $ 440 million up to 2019-2020. The country had exported about 1 million tons in the 2019-2020 campaign. Bangladesh, Malaysia, the UAE and Sri Lanka are the main importers of Indian onions. The export ban on onions, set on September 14, was lifted on January 1.

Nearly a month after the federal government lifted the export ban on onions, India has managed to export 40,000-50,000 tons thanks to a lukewarm response from the international market, say senior people in the industry.

Peru: Turbulent season coming to an end
The onion season in Peru will end in mid-February and volumes are currently low, as the campaign is almost over. It has been a pretty turbulent season, with labor challenges as a result of the coronavirus which have taken a toll on overall yields and protests and roadblocks causing delays and product losses. Still, overall, the season has been good. There has been a strong market throughout the season, partly because of generally lower yields, and partly because the pandemic has given a boost to the demand for onions. Prices have remained stable throughout the season (their main export market is the US). The new campaign will start between June and July and the planting for that season is currently underway. They hope to have similar volumes next year to ensure the market remains strong.

United States: Inconsistent market demand, Mexico on the way
American growers have no reason to complain about the onion supply, especially given this year’s abnormal circumstances as a result of the coronavirus. The stocks currently available come from the Northwest, Midwest, Eastern States and Eastern Canada. Meanwhile, Mexico is also underway with the prospect of a good harvest. This country could become a remarkable competitor for American growers. This week, Mexico already started supplying the first red and yellow onions.

Due to the lower demand from the food service, the focus has shifted to the retail, where there is more demand for smaller sizes. There is also a higher demand for small packages. Meanwhile, the demand is quite volatile. All of this is resulting in low and fluctuating prices. However, as stocks decrease, the price is also expected to pick up somewhat.

China: Rising price due to declining acreage and bad weather
Most exports of Chinese red onions go to South Korea and Japan. Prices are 70-80% higher than normal and amount to around USD 4,500 per ton. Prices have increased further in recent days, ahead of the Chinese New Year on February 12. A small volume of peeled onions is intended for the European market, but high transport costs and a good harvest in Europe have reduced that demand. The end of the halt of Indian exports hasn’t yet had an impact on the Chinese market. In the last 4 years, the price in the Chinese market has been low, but now it is rising. After all, growers have planted less, and the harvest has also been reduced due to the weather. In many of the regions, this reduction is estimated at 75%. Most onions come from the regions of Yunnan, Ningxia, Shanxi and Inner Mongolia.

Australia: Good prospects for the coming season
The onion harvest in Australia is in full swing. It started in Queensland three months ago and gradually moved south. Onions Australia reports that the season’s prospects are very good. Quality and yields are high, with growers, particularly in South Australia and Tasmania, looking forward to a good season. Weather-wise, the summer has been very mild, with no heat waves or major challenges for the growers.

New Zealand: Early start
The 2021 export season has started early and on a good footing Onions NZ says that total onion exports in 2021 are expected to reach between 170,000 and 175,000 tons; higher than originally expected.