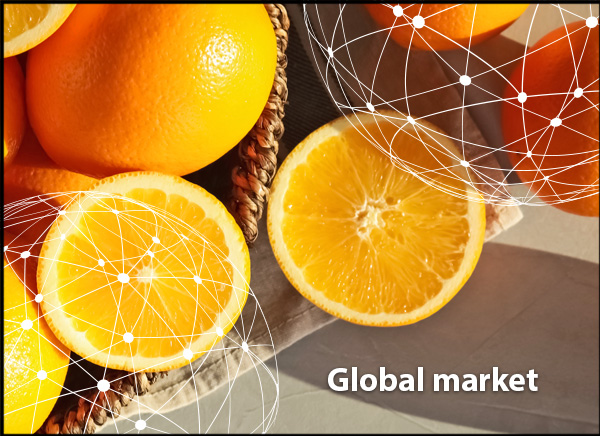 The southern hemisphere’s orange export season has already been finished for a while. Volumes appear to be disappointing in all production regions compared to the previous campaign. In many countries, the start of the season has been delayed because the fruit’s coloring was not yet up to the market’s standards. This was the case in California, Egypt and Italy. Both the lower harvest and the poor coloring of the fruit have to do with the temperatures and the dry weather.

The sales for the oranges overall are slow, according to a Dutch importer, and there is a large variety in the quality of the product on the market.

Germany: No Christmas rush for oranges yet
In Germany, the Christmas sales have started slowly, but Spain is currently in the lead, followed by Italy, Greece and Turkey, among others. Despite the Christmas rush, there is a normal market situation, says a wholesaler who mainly sells Spanish citrus. “We currently mainly trade Navelina oranges, and in the course of December we will also be bringing in some more Navel table oranges and Salustiana juicing oranges. I can only say that the quality leaves nothing to be desired. As soon as the volumes go up a little, the price will tend to fall.”

Organic oranges are also currently on the market, including those from Greece. Due to the weather conditions during the flowering, the season only started in mid-November, a few weeks later than normal. Nevertheless, there is an annual increase in terms of volume, particularly on the Swiss market, where organic citrus is gaining ground. “We already have 30% more orders than last year,” said one supplier at the start of the Greek citrus campaign.

France: Spain on the market, Morocco supplementing the supply
The South African season came to a close three weeks ago, and since then Spanish oranges have been filling the French shelves. There have been some problems with the fruit coloring, but the Brix levels ​​are okay. The Spanish production is not large this year and the sizes are small. The first Moroccan oranges are also arriving on the market, but the quality is not yet good enough at the start of the Moroccan season.

Spain: Smaller volume on the market
This year there has been a reduction in the Spanish citrus harvest, with mandarins and clementines (-35%) being much more affected than oranges (-15 to -20%). The demand for citrus is much greater than the supply, so prices are rising every week. Due to the smaller reduction in the harvest, orange prices are more stable. Last season, oranges achieved the best results when it came to sales, but this year clementines are playing the leading role. At present, the Navelinas are the most common on the market. The transition from the southern hemisphere to the north has gone well for Spanish traders. After all, countries such as South Africa and Egypt do not put large volumes of oranges on the market.

Italy: Delay in the coloring
An unsatisfactory yield has been obtained this orange season, even though the quality is good. Some growers in Sicily are optimistic because they do have sufficient volumes. The Italian orange trees have been decimated by the Tristeza virus. This virus is spreading across the island of Sicily. Approximately 5,000 hectares of citrus crops have been lost and replaced with new varieties that are resistant to the virus. A total of 49,000 hectares were devoted to ​​oranges in Sicily in 2017, with almost half of that located in Catania.

“The coloring of Italian oranges is not going well and that is causing scarcity on the domestic market,” says a Taranto grower. “The price on the wholesale market ranges between € 0.50 and € 0.75 / kg. The high temperatures in October and early November have delayed the start of the harvest by at least two weeks. It will certainly take another 15 days before the fruit is suitable for the market. ”Due to these problems, a 30% drop in the volume of Italian oranges is expected. Prices and sales are satisfactory at the moment.

Egypt: Navel season shorter than imagined
The Egyptian Navel season has been delayed by two weeks and that is making the season shorter. The Navels are pushed out of the market as soon as the Valencias hit the shelves in mid-January. The delay is due to poor coloring of the fruit. The short season could result in competitive prices. In addition to domestic competition, there is also competition from Spain, Morocco and South Africa.

China: Harvest is lower, production costs are rising
The time for the import of large volumes of oranges is over. At the moment, large quantities of Chinese oranges and mandarins are reaching the market. Many production areas in China suffered the impact of dry weather in the second half of the year, so the size of the oranges is somewhat smaller this year. In some cases, this has also caused a reduction in the harvest. Furthermore, oranges and mandarins have ripened a little later and, as a result, they reached the market later than last year. Another reason for the smaller harvest is the heavy rains recorded in the first half of the year, which took a toll during the flowering period.

The price paid for the oranges is high compared to other years. This is mostly due to the increase in the production costs, but also because huanglongbing has had a big impact on the Chinese market. This disease has already reached many Chinese production areas in recent years, and the harvest has been considerably reduced. In addition to the production for its own market, China also exports a lot of its mandarins and oranges to Southeast Asian countries. The Chinese production is doing well there, with the demand also increasing every year.

South Africa: Early Navels hardly lucrative
The season is over for South Africa. With 24.3 million boxes (15 kg) of Navels, the volume has been 10% lower than initially estimated. The Netherlands remains the most important importer with 57,000 tons. The export of Valencia oranges was also lower than expected. It had been predicted to amount to 52.9 million boxes, but it stood at 46.8 million, compared to last year’s 54.4 million boxes. The demand for South African Navels was affected by the supply of late varieties from Spain and Valencia oranges from Egypt. The early Turkish Navels also put pressure again on the late Valencias from South Africa.

Valencia oranges are doing better than the Navels, especially those of the growers who had the right sizes for the processing industry. There was even a period when any price would be paid for Valencias of the right size.

The northern Senwes region saw a reduction in the Navel production due to hail, poor coloring and probably also the impact of exhaustion after the previous season. The estimates point to a 27% drop. In the Eastern Cape, growers also struggled with the coloring on the late Navels, and just like in the Western Cape, they’ve had to deal with some wind damage. In the Western Cape, gigantic sized Navels “as big as ostrich eggs” have been harvested in some places after the recovery from the dry weather. In general, the early Navels are becoming less and less lucrative for South African growers, as their supply overlaps with the Egyptian Valencia season. Early Navel orchards are therefore being removed across the country.

Chile: Waiting for the 2020 season
The South American season has been over for months and it is still too early to say anything about the prospects for the 2020 season. In the 2019 campaign, the volume was somewhat smaller than in 2018, but the latter had been a record harvest. Chilean oranges compete on the market against Valencias from California and Navels from South Africa.

United States: Decent demand for domestic oranges
The supply is currently stable on the North American market. In California, Navel oranges arrived in early November and the last Valencias are being packed. The Cara Cara and Minneolas will come next. According to a trader, the volumes are roughly the same as last year, but the sizes are remarkably better this time. In Florida, work is currently underway with the Navel and Hamlin oranges. Here the harvest has also been better than in previous years. Hurricane Irma ravaged this region two years ago.

Although the harvest in California has been somewhat delayed due to poor coloring and/or lack of sugars, the taste is better than in the previous year, according to the growers. This is mostly due to the mild summer and cool autumn. In Florida, the season has also been delayed because the fruit’s sizes are still too small.

Market demand is currently decent. Certain imported products, such as the Midnight Valencias, are still on the market. Every year, growers from Florida and California have to deal with citrus imports from countries such as Mexico, South Africa, Chile and Peru. For the US, the market should pick up again in December. The price is currently around 15% lower than last year.

Australia: Exports to China on the rise
The most important export market for Australian oranges is China, with 26% of all shipments, or 50,204 tons of oranges. The second biggest destination is Japan. The peak season of the Australian Valencias is just around the corner and accounts for 13% of the total volume. The most important variety, however, is the Navel, which is grown in the winter. A total of around 52,089 tons of oranges worth €229 million were grown in 2018.