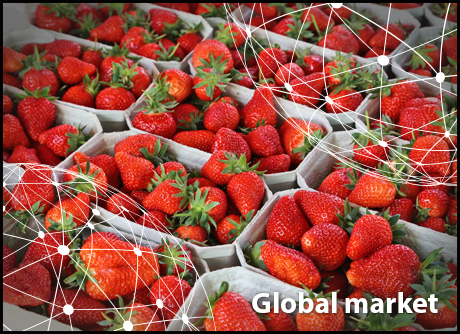 If there’s one word that currently applies to the strawberry market, it is “recovery.” There was an early start of the season which was not in line with the demand for strawberries, so the situation was dramatic. But with Mother’s Day around the corner, and then the summer, the demand will pick up in the coming weeks. The prospect is that prices will rise because the demand is higher than the supply. The volumes of open ground strawberries are smaller than last year’s. This is due to adverse weather conditions which have either damaged the harvest or are currently delaying the ripening process.

The Netherlands: Extremely cheap strawberries in early May
“Never seen before; extremely cheap.” Dutch fruit traders were short of words to describe the poor conditions of the strawberry market in early May. A combination of an early arrival of the Dutch and Belgian greenhouse productions and a delay in the Spanish season led to an oversupply on the market. Moreover, a number of large retailers still had Spanish strawberries on the shelves in week 16, while the Dutch supply was already on the market. The situation was especially tough for greenhouse growers, who were paid between 1.50 and 2.50 Euro per kilo for their strawberries. The good thing is that the market situation can only improve from now on. Also, celebrations like Mother’s Day traditionally give strawberry sales a boost.

Belgium: Strawberry prices on the rise
Strawberry prices are currently slightly higher than they were in recent weeks and they are expected to pick up a bit, as exports are starting to get off the ground. We’ll have to wait and see what happens when the production from tunnels arrives at the end of this week, but the demand from abroad is expected to increase slightly. The situation on the strawberry market is completely different than last year. At the start of the season, prices were much too low for the most expensive strawberries, the ones grown under glass. The size of the strawberries has been sharply reduced because it was too hot a few weeks ago and the plants could not handle it.

Germany: More and more domestic production on the market
Dutch, Belgian and German strawberries dominate the German wholesaler market. The good product quality and the excellent weather in Germany are good for the demand. In the meantime, Italian, Greek and Spanish strawberries are quickly disappearing from the shelves, although the price stands generally well below that for the Western European supply. In most places, the pricing was satisfactory, although the price per 500 grams has fallen below 0.60 Euro in some places.

France: Stable market for the domestic production
The French strawberry season has been in full swing for more than a month. The well-known Gariguette has been on the market for a few weeks, and other premium varieties, such as the Charlotte and the Ciflorette, are now available on the shelves. A trader says that the market is in balance. “The quality and quantity of the products are good. The demand remains somewhat low due to the bad weather conditions in the west. As soon as it gets warmer, the demand will rise. Prices are stable. They are not very high, but current prices are attractive enough for consumers and are also high enough for growers to make a decent profit.”

The French premium varieties are mainly purchased by retailers and the hospitality industry. Supermarkets are still offering a lot of Spanish strawberries. On Rungis, the price for the French Gariguette stands at around € 6.50 per 250 grams. Spanish strawberries are sold for € 2.70 per kilo. Prices for standard French strawberries oscillate between € 5.50 and € 7.50 per 500 grams.

Italy: Growers satisfied with prices
Although the conditions in the Italian strawberry market this year are modest and more susceptible to fluctuations, things are generally not too bad.

At the beginning of May, the best strawberries were sold for between € 2.30 and € 3 per kilo, despite the low temperatures in the country. The end of the campaign is approaching in southern Italy, while in the northern regions the season has kicked off with good volumes. The quality of the strawberries is good.

The demand for strawberries has recently grown in both Italy and abroad. The demand is much greater than the supply. This is also due to the weather conditions, which have caused the production around Naples to currently be 40% smaller than 15 days ago. The growers hope that this will lead to further price increases, especially in view of the demand in Germany.

With Mother’s Day around the corner, the demand for strawberries will rise not only in Italy. Therefore, the doors are open for exports on the European market. There are no longer Spanish imports, and the first French and German strawberries are starting to hit the market. However, the temperatures are cold and this isn’t good for the fruit’s ripening.”

Spain: Large volumes going to the processing industry
Spanish strawberry exports will be stopping this month, as the Netherlands, Great Britain, Germany and Belgium have enough stocks to cover the needs of their own markets. Prices are currently higher compared to last year, but the harvesting costs have also risen, so the profit has remained the same for growers.

As a result of mild temperatures and rain, the volume available during Easter has been limited. Due to the holidays, the market ground to a halt at the peak moment, causing strawberry prices to fall in Spain. However, due to rainfall, the quality was not optimal and large volumes went to the processing industry. The new Rociera variety suffered the most quality issues.

Greece: Difficult season, but recovery at Easter
The Greek strawberry season will continue for a few weeks. The weather conditions have recently caused some problems, so the production and prices have been lower. Fortunately, Easter has facilitated a slight recovery in the market.

The weather has played a major role this season. The start of the Greek season went badly due to frost and rain, and the production volume fell. The prices of strawberries also remained lower than expected during the season.

Exports to the Asian market have grown, especially those going to Singapore and Malaysia. Yet Greek strawberries have to deal with fierce competition outside Europe; in Asia, from the dominant South Korean strawberries; in the Gulf States, mainly from Egyptian and Moroccan products.

The European market, however, was good for the Greeks. Eastern European countries in particular imported a large part of the harvest. There was, however, a major disappointment at the season’s peak, in March-April, as the Russians temporarily closed their borders.

Given the course of the season, the Greeks may reduce the acreage for the following season if they are unable to find alternative markets.

China: Quality improved
The greenhouse season started in November and is coming to an end this month. Shandong-grown strawberries are currently on the shelves. The price is somewhat higher in the beginning of the season, because there is not yet much on the market and the quality is still very high.

In China, a lot of strawberries are also frozen, sold and exported. Until a few years ago, the norovirus was detected a few times in frozen strawberries; however, much stricter controls have been enforced ever since, and companies themselves have taken steps to combat this virus. As a result, there have been almost no more norovirus cases and the demand is high. The price of frozen strawberries depends on the market price. Right now, the price is still high and the demand is somewhat lower. Buyers generally wait until the price has dropped a bit and the strawberry season is well underway.

Japan: Exclusive product
In the same way that strawberries were once brought from America to Europe, the product has also been extremely successful in Japan. Strawberries were introduced there in the 20th century, becoming much sweeter and more expensive than it’s usually the case for a totally new product: the Ichigo.

Since then, many different varieties have appeared on the market, and they are sold at high prices. This is in line with other types of fruit on the Japanese market, which are perceived as a luxury product, similar to champagne or bonbons. The time, effort and technology put into the strawberries justify the high price for this product. The Japanese strawberry season takes place around Christmas, when the demand is high.

Australia: Varying prospects
The season in Queensland will begin in the coming weeks. The prospects vary among growers. One grower expects a high yield, while another says that the quality of his plants is deteriorating. This is due to the plants to be cultivated being shipped from Victoria and South Queensland, where they had a difficult summer; however, the market conditions could cause prices to rise. Due to the lower volumes, prices may go up in the coming season. Last year, needle pieces were found in strawberries in Australia in the processing industry.

At the end of June 2018, 93,545 tons of strawberries had been produced in Australia, with a total value of $ 445 million. Exports increased by 11%. The domestic market accounted for 72% of the fresh strawberry sales.

Mexico: Good export prices for strawberries.
The Mexican season in the state of Michoacán ended well due to the rising prices in the final stage. The export price for 4 kilo boxes stood between 180 and 400 pesos. This is an increase of 100% compared to the previous campaign. Bad weather conditions have resulted in a lower yield, while prices in the US have been rising.

The rising price of strawberries is beneficial for growers and is a reason to continue growing the fruit in the following season. Thus, Mexico will likely remain the most important area, as far as strawberry production is concerned. In the Zamora Valley, we still have to wait and see whether the changing climate conditions will take a toll on the acreage.

United States: A challenging year
It seems that the 2019 season in California looks a lot like the previous one. “Most of the strawberry supply comes from the southern districts, mainly Oxnard (the largest producer) and Santa Maria (close behind it). The production is also ready in Watsonville-Salinas,” said a US trader from California.

Oxnard will continue to produce until the end of May. “It’s going to be a bit of a challenge, since the fruit from Oxnard is not as strong as in Santa-Maria and Watsonville. We therefore cannot assume that production will continue until May. It will depend a lot on the demand.”

In general, the strawberry production is falling sharply. “At the moment, Oxnard has around 4,500 tons less than last year. In the other regions, the total volume is approximately 6,800 tons smaller than last year. However, the production really gets going in the last month, and Oxnard currently has more strawberries than at this same time last year.”

The season in California lasts until October, after which Mexico takes the market over. Florida follows in December.

Stable demand
At the moment, the demand is stable, but with Mother’s Day approaching, it is expected to increase. The demand for strawberries also usually grows in the following holidays, although not as strongly as during the first ones of the year: Valentine’s Day, Easter and Mother’s Day. During the summer holidays, strawberries face competition from other summer fruits, such as watermelons and stone fruit. “I expect the demand to develop in the same way as last year.”

This means that prices will fall somewhat. “We had strong prices during the winter, lasting until about last week, but prices are still fairly high. I think the rest of the season will be similar to last year’s, and that makes it challenging. Last year, we had a relatively weak market during the summer. Now that there are enough stocks coming from California and prices are starting to fall, I don’t see how things can improve again.”