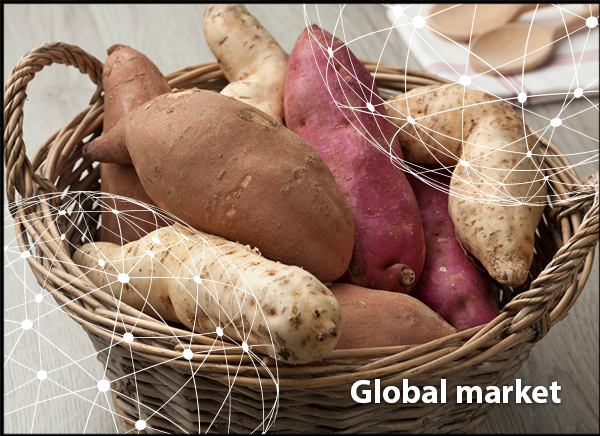 The popularity of sweet potatoes among consumers has grown enormously in a short time. The most important sweet potato producers in the European and North American markets are the United States, Spain and Egypt. The supply is large this season, especially for Spain, which will have a substantial production in December. The weather conditions have had an impact on the yield in a number of regions. The Italian harvest has been halved, and in the US it has started later than usual.

The Netherlands: Large volumes from the US and supply from Spain and Egypt still available
The sweet potato harvest in the US is much larger than last year’s and this is resulting in a somewhat stiffer start to the season, as there is still a large supply from Egypt and Spain available. While in the previous campaign it was quite difficult to find sweet potatoes for a competitive price, now there is actually some oversupply. Nevertheless, the Dutch expect the market conditions to improve this month, with Christmas around the corner and the customers now buying from Egypt and Spain switching to the sweet potatoes from the United States. Moreover, the strawberry season has started in Egypt, which means that fewer containers are available to ship sweet potatoes. In fact, this is often the sign that Egypt is going to stop exporting sweet potatoes. The popularity of sweet potatoes has increased enormously in the Netherlands in just a few years and the country is conducting more and more tests with sweet potato cultivation.

Belgium: Prices are on the rise again
Before the winter months, high prices were being paid for the sweet potatoes from the United States and Honduras on the Belgian market. However, with the imports from Spain and Egypt, the supply increased and prices fell quickly. At the moment, prices are rising again ahead of Christmas due to a reduction in the supply. The quality of the sweet potatoes from the US has been better than that of the Egyptian and Spanish.

Germany: Winter supply consists mostly of overseas products
After the good start of the season in European growing areas in August, the market has remained lively until well into November. The start of the Egyptian campaign was also relatively successful, although there has been some oversupply and very low prices since October. The supply from Latin America – especially from Guatemala – is currently on the rise. We see good opportunities for these tropical varieties (particularly for the Covington, Beauregard and Evangeline). “Between December and February, we are counting on good sales and stable prices,” said an importer.

In terms of trade volume, Germany is lagging somewhat behind Great Britain and Southern Europe, although consumption is also quickly increasing here. More and more growers are trying to produce the potatoes on German soil. These regional sweet potatoes are doing great in the local retail. In Switzerland, there has been a professionalization process underway. Under the name Batati, Swiss growers have succeeded in creating a central marketing cooperative and in supplying domestic retailers directly. They are now also trying to handle the class II product, which meets the requirements of retailers, under their own label.

At the moment, prices on the French market range between 0.90 and 1.00 € / kg for the Spanish product and between 1.15 and 1.20 € / kg for the US one. In the long term, the demand is expected to continue to grow, so more French growers are showing interest in growing sweet potatoes themselves.

Spain: A lot in stock for the growing European market
At the moment, most Spanish sweet potatoes have already been made available. The harvest started in July and the warehouses are full of sweet potatoes intended for sale on the European market. Although there is a lot of competition on the market, with more and more local production, consumption continues to rise. Due to the growing demand, prices remain stable during most of the season.

This season, the volume is greater than last year, when the harvest was reduced due to excessive rainfall in the main producing regions. The quality is good this year and the demand is usually high around Christmas. After Christmas, the demand is expected to fall briefly and then increase again, as sweet potatoes are ideal as part of a weight loss diet. Furthermore, there is a good demand for the crop from the processing industry. In the beginning of the season, the demand was high while there was not much production on the market, although the domestic market is still small, certainly when compared to neighboring Portugal, where consumption is five times as high. The most important producing region is Cádiz, although more and more is being planted in Granada, Seville, Valencia and Alicante.

Italy: Yield this year halved due to spring weather conditions
Sweet potatoes are still relatively unknown on the Italian market, but that is starting to change. In the Venice region there has been a sharp fall in the production (around 50%). The main cause was the excessive rainfall recorded in the spring months during the grafting of this root vegetable. The price for the sweet potatoes somewhat compensates for the lower yield. The price on the Italian market currently amounts to between € 1.20 and € 1.50 / kg. The sale of sweet potatoes on the Venetian market is coming to an end this week.

“This year, our yield has been halved compared to previous years,” said a grower from Apulia. “We started our harvest in mid-August and there was interest from various traders. However, the prices offered fell below our expectations. The harvest ended in October. ”In Caraglio, Piedmont, the harvest of the “Batata Buona”, a niche of a niche, finished on November 6. There are currently around 9 growers devoted to the cultivation of this special variety and the market prospects are positive. The growers are based in Caraglio and Bernezzo.

China: Larger volume pushes prices on the market
In China, the earliest production areas, located in the south, start harvesting their sweet potatoes in July. Afterwards, the campaign gradually moves to northern areas. The harvest of the late variety kicks off in October. The season started a bit later than last year due to the abundant rainfall recorded during the harvest period. The rain has had a particularly big impact in Guangxi. The volume there has dropped by 20% this year.

At the moment there is a lot available on the market, as different production areas have all expanded their acreage. This is pushing prices down; in fact, they are now lower than at the start of the season. Furthermore, the production costs of sweet potatoes have increased this year, further reducing the growers’ profits. Since sweet potato cultivation has expanded so much, more and more companies are looking forward to exporting their products. Exports are already going to Europe and Canada, where the product is well received and there is a high demand. In China’s domestic market, sweet potatoes are especially popular in the north. In the south, consumers still need to get used to the product, so they are not eaten as often. A lot is also invested in new varieties, which are sold for better and more stable prices.

United States: Different reports about the market situation
Normally, the sweet potato harvest in the US starts around the end of July, but this year it kicked off in late August / early September. Due to the rainfall and the dry weather, the harvest obtained has fallen somewhat below average in most regions. In some states, such as Louisiana and California, there isn’t a lot in stock. California reports a 15-20% drop in the supply compared to last year. In North Carolina, despite the dry weather, the yields seem to be slightly better than last year.

The demand has been meeting the traders’ expectations, especially with Thanksgiving. With Christmas around the corner, the demand is not expected to fall. “Only in January does the demand slow down somewhat. The prices this season are higher and more stable than in previous years, mostly because there are no more old stocks from last year and the harvest is about average. In North Carolina and California, prices are above average, but growers are also dealing with more costs than usual.

Yet the reports differ per region. In California, the rain has caused the production to fall and to suffer some quality issues. The price has risen, but the costs are also higher. In Louisiana it is clear that the prices are back at the right level, because there is nothing more from last year in stock. In North Carolina, people talk about above average prices, but with an average market demand around Thanksgiving.

Australia: Peak season is imminent
The spring and summer months are the peak time for Australian sweet potatoes. Most states start producing in late December / early January. Only in Queensland, which accounts for 78% of the Australian production, is the crop grown all year round. Last year, 97,222 tons were cultivated (+11%), with a 16% fall in terms of value. The largest part is intended for the domestic market and only small volumes are exported, but those figures are rising. The most important markets are the United Arab Emirates (57%), Hong Kong (16%) and Singapore (15%). The most important variety is the Gold sweet potato (90% of the total production).